Return to the Main Teams & Players to Watch page USA WNT playing in friendlies before the WC, image from Ohnotheydidn’t (1)

If there is one team that is consistently considered the number one threat in Women’s Soccer, it’s the USA. The Americans have a prolific record in World Cups, the Olympics, CONCACAF and the Algarve Cup in which they continue to field top players, offering their fans top quality performances (1). Currently the German team is ranked ahead of them at number 1 in FIFA rankings going into this years World Cup, with the US team coming in close 2nd (2). Nonetheless, the US team remains number 1 in most fans’ minds. The US team has made huge leaps in building up the popularity and visibility of the women’s game with players not only representing well on the field, but also fighting for women’s rights off the field. Historically, the US 1999 team (3) is well known for being one of the largest instigators of the revolution to increase women’s sports in America and in the world. What Mia Hamm and the entire 1999 team did for women’s sports will forever be marked in the minds of fans and players alike (4). (For more information on the impacts of the 1999 team and the progress of women’s soccer as a whole, click here.)

Looking back at the current team, the entire US team plays in the National Women’s Soccer League (NWSL) in the US (1) which recently was just revamped and renamed. With many players on the team playing collegiate soccer before entering the professional league, the US has one of the best support structures in place for women’s soccer players looking to make a career out of soccer. Although funding and media coverage is still a constant struggle, the leaps and bounds that have been made in the past years is greatly applauded.

The current head coach of the US team is Jill Ellis, who is of both British and US nationality (5). In the group that the US team has been placed in for the World Cup, Ellis will have the added pressure of facing the US’s previous head coach, Pia Sundhage, who is currently the head coach of the Swedish team. With the knowledge that Sundhage has a pretty good understanding of the US’s team and playing style, Ellis will face the added challenge to catch her off guard. In response to this draw Ellis said:

”As far as playing Pia, we had a little giggle about it this morning that we would be in the same group and it turned out to be prophetic,” Ellis, a former assistant to Sundhage, said during a conference call. ”For me, it’s actually easier playing a friend. I have tremendous respect for her. I just know it’s going to be a great game, and we’re both going to prepare our teams the best we can and let them duel it out.” (6)

Ellis is approaching the tough draw in Group D positively too:

”It’s going to be a physically challenging group, and I certainly think our depth is going to come into play for us again,” Ellis said. ”We’ve played Sweden and Australia many times, and I know we’ve played Nigeria in the World Cup, but they’re all presenting slightly different challenges.”

Ellis took a positive approach to what is undeniably difficult news. “I actually think having tougher games in the first round of a major competition will prepare us for the knockout stages,” she said. “We’ve got to hit the ground running. There is not any slow introduction to this World Cup.” (6)

The team has certainly changed a lot since Ellis took over, with a number of new players joining the team and changing the dynamics. This will add an interesting dimension to the US game, and will be something to look out for when the tournament begins.

When it comes to media following, the US women’s team is by far the best represented, with FOX playing a particularly large role in this upcoming world cup, screening every single match live. In addition to this, the players have received more media attention through a recently released trailer called “One Nation. One Team. 23 Stories.” more intimately following the players on the US Women’s National Team. However, with increased media coverage, there is of course also increased scrutiny that falls on all the players, with goalkeeper Hope Solo in particular being involved in a number of incidents prior to the big tournament (7). Despite some of the recent negative press for some players, the majority of the build up has been nothing but excitement. With the games being played just across the border in Canada, there will definitely be streams of US fans crossing over to support their team. This World Cup in Canada has built up an immense hype for fans and players alike, boosting the visibility of the women’s game, and it will be interesting to see how the US team fares in this world cup.

2014 Female Athlete of the Year Nominees, image from bdthisis (4)

The US team boasts some of the most well known players in the women’s game with names like Alex Morgan, Abby Wambach, Megan Rapinoe, Hope Solo and Sydney Leroux being but a few. Undoubtedly both Morgan and Wambach will be highlighted in terms of their goal scoring abilities, and they will be a pleasure to watch. For a change though, I wanted to turn attention towards two players in the midfield who are bound to have huge impacts on the US game: Carli Lloyd and Lauren Holiday. 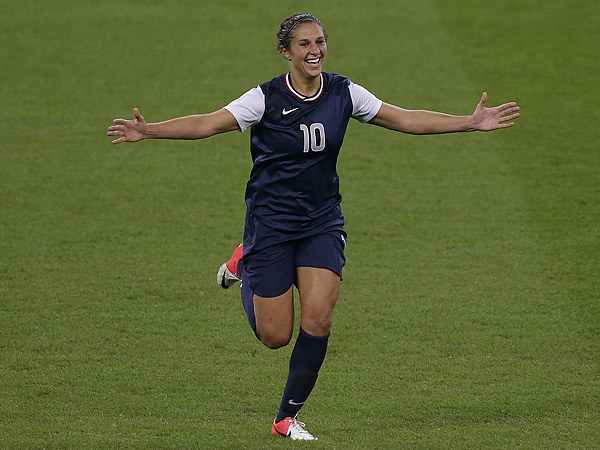 Carli Lloyd plays the central midfield position on the US line up and has played on the US national team since 2005. She is highly influential in pushing forward and opening up opposing defenses. She is a player of opportunity who will not let one fall to the wayside. Lloyd is also one of the top scorers for the US team with an impressive total of 50 goals scored for the US team (8).

Lloyd is often overshadowed by the other stars in the US team, and is certainly one of the most underrated players. She is known for making game winning plays and goals, the most recent one being in a game against Norway during the Algarve Cup. When asked who would put the team on their back during a tough game, Lloyd is the certain response. This is what teammate Hope Solo had to say about Lloyd:

​“Carli is the mentality of this team,” said goalkeeper Hope Solo, who started in goal in her first game back after a 30-day suspension. “She holds everybody accountable: You get in hard for tackles, you win balls, you do what you can to help this team. And she doesn’t let you get away with anything less. That’s a true leader.” – Hope Solo (9) The second player to watch: Lauren Holiday, formerly Lauren Cheney, will be key in this World Cup in creating goal scoring opportunities for the US team (10). Holiday plays as an attacking midfielder, often creating beautiful plays from the wings. Holiday is well known for her keen eye and play-making abilities, as well as her threatening presence in front of the goal. She had a few things to say about the upcoming match-ups in Group D:

“Sweden’s a great team and Pia knows us pretty well, but at this point I think we’re a different team and we’ve grown a lot. It’s a challenge that will be fun for us. It’s going to be a really good game.” – Lauren Holiday (11)

“I think our group has some of the top teams. Nigeria brings it in every world championship. They’re so athletic and they keep getting better and better. They’ll be tough to play against. Australia also gets better in every world tournament they play in and they’ve really tried to come together and play some great soccer.” – Lauren Holiday (11)

Both Lloyd and Holiday will be key players in maintaining possession and creating key plays throughout the World Cup, and don’t be surprised if the two of them don’t get a few goals in for themselves too!

Return to the Main Teams & Players to Watch page

2. US Performances in past World Cups. http://en.wikipedia.org/wiki/United_States_women’s_national_soccer_team