The French will enter the tournament this summer as a clear top contender. Ranked 3rd in the world, The french national team has been a force to deal with in recent years as they climbed the rankings. The team has only qualified for two other world cups, 2003 and 20011,  yet has done relatively well in both achieving 9th and 4th place. The team will hope to better their previous efforts this summer and could easily contend for the title.

The French team was founded in 1919, playing its first match against the wildly popular Dick, Kerr Ladies. This and other early games attracted as many as 25,000 spectators; however, the team suffered discontinuation and was only reinstated in 1975. Since then the French team has been building as a world powerhouse. The team qualified for its first major tournament, the European Championship, in 1997 and has qualified every year since. Nevertheless, the team has never won a game in the knockout stage despite being ranked in the top 10 internationally since 2003. The World Cup has been an entirely different story for the French side. The team qualified for its first world cup in 2003 where it escaped the group of death by a tie. Despite losing their first game out of the group stage, the French side had proved their worth and jumped to 7th in the world rankings. They however failed to qualify for the 2007 world cup, a shock for the number seven team in the world. This failure cost then manager, Elisabeth Loisel, her job. The team reevaluated and restocked for the 2011 world cup where they managed fourth place, their best placing in any tournament by far. They went on to place fourth at the Olympics in 2012 and fifth at the Euro in 2013. 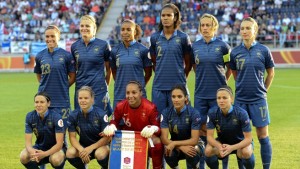 The French team will enter the World Cup this summer in great form. After defeating the second ranked United States earlier this year in a friendly, they placed second in the hyper competitive Algarve cup. Out of the twelve teams in the cup, nine have qualified for this years World Cup. The French went 3-0 in their group containing reigning world champion, Japan. They went on to lose to a reinvigorated United States squad in the final.

The French team had one of the best qualifying records going 10-0 with a goal differential of +51 including a 24-0 aggregate score against Bulgaria. The French will hope to continue their excellent form throughout the cup and will be favorites to win the group. 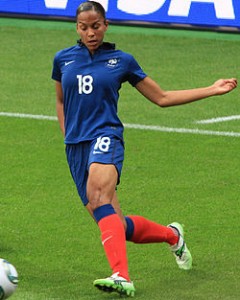 Marie-Laure Delie is one of the most dangerous players on the French team. As a striker, Delie has the second most goals ever for the French Women’s National Team. She has achieved this despite only 85 caps, the lowest of the top 10 goal scorers. She’s spent most of her career at Montpellier before transferring to PSG  for the last two seasons. Her switch has proven effective as she scored her most goals in a season last year and is on track to a similar sum this year. Delie will join five other PSG players on the national team this summer.