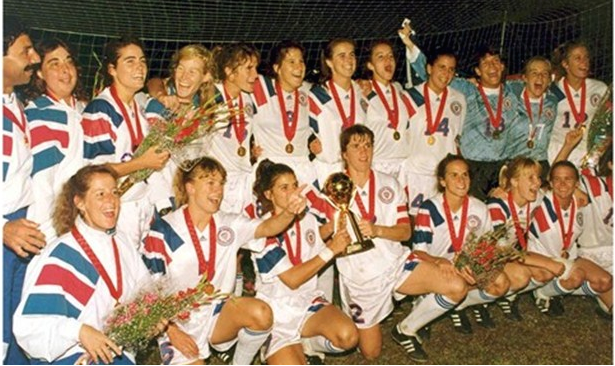 Overview/Conditions
The 1991 Women’s World Cup was the first of its kind, defining a true coming of age of women’s football. It had been 61 years since the 1st men’s world cup, highlighting a significant gender gap in the sport for an extended period of time. The event was spearheaded by Dr. Joao Havelange, FIFA’s president at that time. A prototype of the tournament, called the 1988 FIFA Women’s Invitation Tournament, was hosted in Guangdong, China, the eventual site for the 1991 FIFA women’s world cup. Much controversy obviously went in to the 1st Women’s World Cup, as FIFA was still reluctant to give up their superior brand to the women’s side of the sport. Issues surrounding the length of the matches was also prevalent, as the matches were only 80 minutes, as opposed to the normal 90 for men. Captain of the United States team, April Heinreichs even commented:

“They were afraid our ovaries were going to fall out if we played 90!”(1)

Mars Inc. sponsored this international event, and because of the issues of giving up the “World Cup Brand,” the event was dubbed the 1st FIFA World Championship for Women’s Football for the M&M’s Cup.” (2) The name was given due to the fact that Mars was the brand that made M&M’s, ultimately devaluing the importance of brand for the Women’s World Cup. It was not until the success of this event that the 1991 event was deemed the “Women’s World Cup.” The event also held to be a revolutionary tournament for the field of women’s sports as six female referees or assistant referees were appointed for matches for the first time in FIFA history(3).

Group Stages
The top two teams from each group advanced to the next round along with the two best third place teams.

Group A proved to be a strong group, featuring a Norway squad who were the eventual runner-ups of the tournament. However, China started off the tournament on fire and surprised most viewers by beating Norway 4-0. Norway was able to bounce back and win its next game 4-0 against the weak New Zealand side. Denmark was also able to defeat New Zealand 3-0, and joined the likes of Norway and China in the knockout stage. Liu Ailing from China led all scorers in Group A with an overwhelming 5 goals, including 2 separate 2-goal performances. 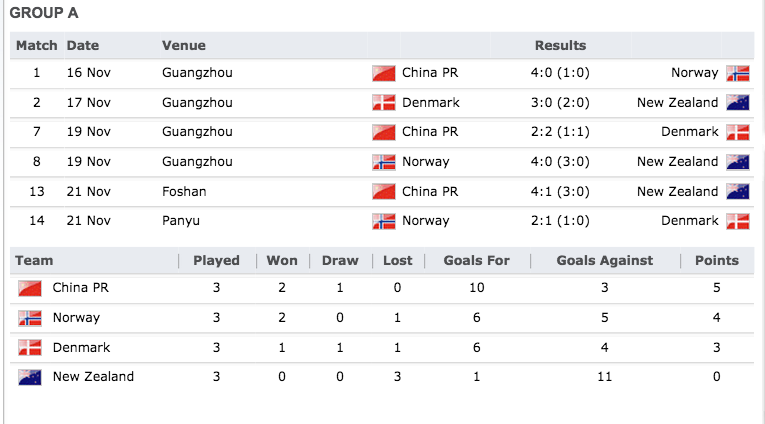 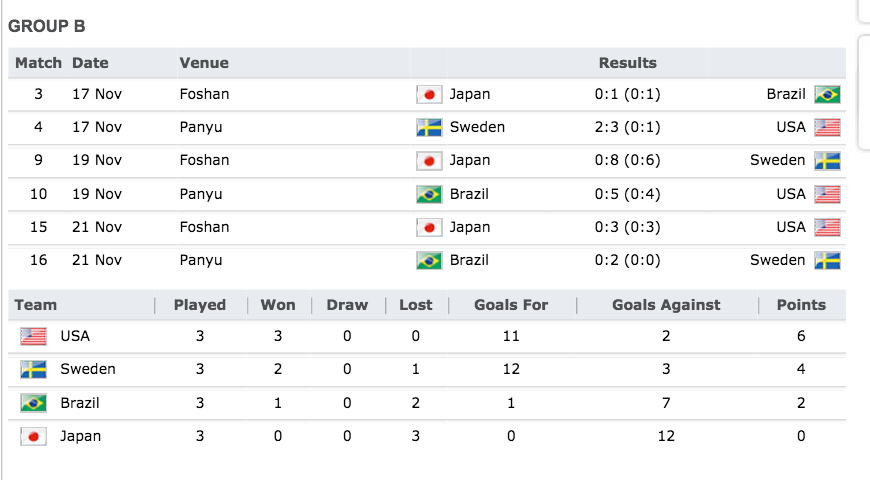 Group 3 featured a strong Germany team (defending European champions) who eventually won all three of their group games. In fact, they did not allow a single goal in any of their first three games. Carolina Morace from Italy recorded the only hat trick in group play in their 5-0 rout against the Chinese Taipei. Despite her 4 goals in group play, eventual footballer of the century Heidi Mohr from Germany led Group C with her impressive 5 goals. The interesting part about Group C was that every single game resulted in a shut-out. Despite losing two out of their three group games, the Chinese Taipei joined the defending European champions and Italy in order to move on to the knockout stage. 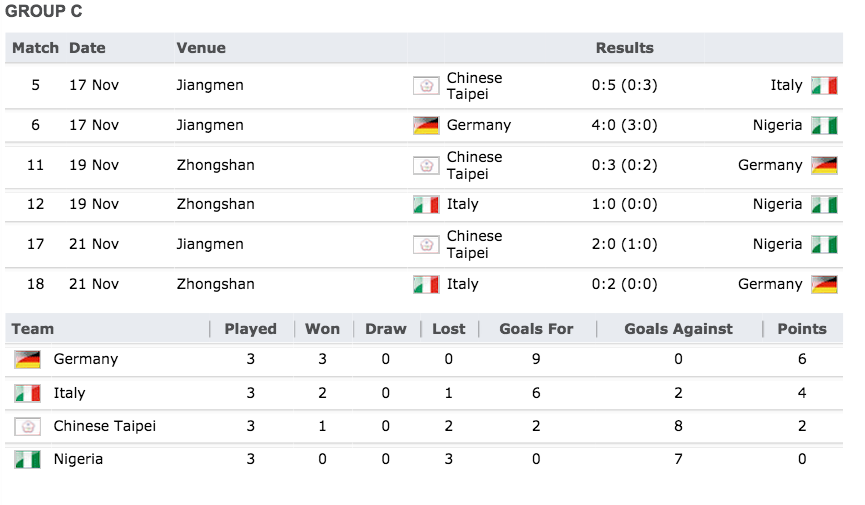 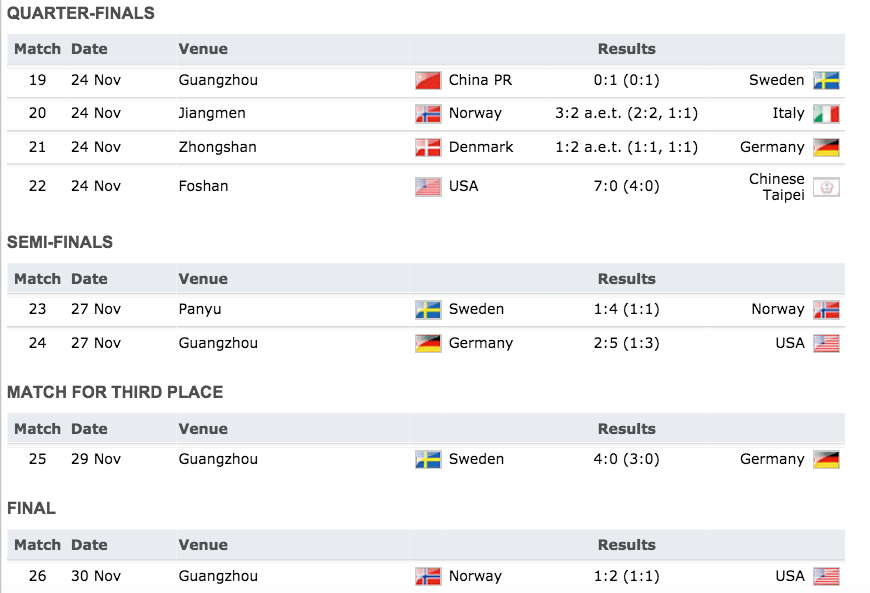 Quarterfinals: Germany Vs. Denmark, China vs. Sweden, Norway vs. Italy, United States vs. Chinese Taipei
Advanced: Germany, Sweden, Norway, United States
The quarterfinals started off with a thriller between Germany and Denmark. Regulation ended in a 1-1 tie, when Heidi Mohr, the tournament’s leading scorer up to this point, scored a 98 minute goal to win it for Germany. Sweden vs. China proved to be a tough defensive battle, except for the early 3rd minute goal by eventual United States head coach Pia Sundhage. Norway vs Italy also proved to be another quarterfinal nailbiter. Norway led the game 2-1 until the (last)80th minute, when Rita Guarino from Italy scored a late goal to send the game to overtime. In the overtime period, Norway was fouled in the box to receive a penalty shot in the 96th minute, which was drilled in by Tina Svensson to send the Norwegian team to the semifinals. The United States went on to absolutely dismantle the Chinese Taipei women in a 8-0 victory. This victory accompanied a record-setting 5 goal performance from Michelle Akers, who went on to win the Golden Boot for most goals in the tournament.

Semifinals: Sweden vs. Norway, United States vs. Germany
Advanced: Norway and United States
In the first semifinal matchup between Sweden and Norway, Sweden got off to an early 1-0 lead, when Lena Videkull, their leading scorer, put in a 6 minute goal. However, Tina Svensson scored another penalty shot in this round to tie things up, followed by 2 goals by Linda Medalen in Norway’s 4-1 victory over Sweden to advance to the final. The other semifinal between the Untied States and Germany also proved to be one sided. Led by 5 goals between April Heinrichs and Carin Jennings, the United States was able to handily defeat the Germans 5-2 to set up a matchup in the finals against Norway.

““We hated Norway. We always hated them,” says Akers. “They were good, they were tough, they were bitchy, they talked smack. I hated them, but it was fun. The more I hate them the harder I end up playing.”(4)

The finals did not live short of its expectations and proved to be what would be a great game between Norway and the United States. Michelle Akers gave the United States an early lead when she scored a beautiful header off a free kick in the bottom right-hand corner of the goal in the 20th minute. Linda Medalen shortly thereafter tied the game up in the 29th minute off of Norway’s own free kick, to make the game tied 1-1 going into half. At halftime, Akers was approached by the United States goalkeeper coach and was told she had to win the game.(5) The captain Heinrichs remembers a lot of yelling in the locker room. The second half started out as an early defensive battle between the two sides, until Michelle Akers received an over the top through ball from Shannon Higgins and dribbled past the Norwegian goally to score the game-winning goal in the 78th minute. This gave the United States its first title on either the men’s or women’s side.

Media Coverage
Throughout China, the host nation, media coverage was actually pretty available to the general public. However, getting the footage out internationally seemed to be a general challenge. In fact, coverage of women’s soccer still continues to be an issue today. Michelle Akers, one of the the United States’ stars commented:

“Four people met our plane at the gate when we landed at JFK: two reporters, the coach of the Men’s National Team, and a friend of mine.”(6)

Final Thoughts
Despite the lack of international media coverage, the 1991 Women’s World Cup deemed successful in the eyes of president Joao Havelange:

“As president of FIFA it was a special pleasure for me to watch these young ladies playing with such flair and such elegance, and according to the reports of the many media representatives present, making the game truly into a celebration … women’s football is now well and truly established.”(7)

In fact, the 1991 Women’s World Cup’s success led to the repeat of the the event every four years. In 1991, 99 goals were scored throughout the tournament, with an average of 3.8 goals per match proved that the women’s game could be as exciting as the men’s.