Edited and Updated in 2015 by Brian Wolfson

Return to Table of Contents

The 2014 World Cup in Brazil was hosted in 12 cities throughout the country, each boasting their own unique soccer culture and history. The stadiums, some refurbished and some built especially for the occasion, served as the World’s stage for the month-long competition. Trials and tribulations, ranging from constructional difficulties to weather issues, plagued the construction of numerous sites. However, Brazil and FIFA combatted most of these issues in time for the World Cup. The stadium served as not only a means to showcase the players and the teams, but also for fans to relish in their passion for the sport. Below is a list of all the stadiums and a brief description.

The Arena Pernambuco, built especially for the 2014 World Cup, officially opened on May 22nd, 2013 after a smooth three-year construction process. The total cost came at R$500 million dollars, with the naming rights sold to a beer brewer called Itaipava. With a capacity of 46,000, it hosted five matches including one Round of 16. It is located in São Lourenço da Mata, a suburb of Recife about 18 kilometers west of the city center. [1] Recife is famous for it’s beautiful Boa Viagem beach that will serve as a main tourist attraction in the region. [2]

The construction of the Arena Pernambuco was just a small component of the larger Cidade de Copa project in the surrounding Recife area. The space around the city rapidly urbanized in anticipation for the World Cup. The project prioritized security and mobility with a focus on environmental sustainability. 24-hour security cameras along with a new public transportation system were put in place. Furthermore, almost half of the focused region was dedicated to public parks and open spaces. Along with the arena, a university, a hotel and convention center, along with commercial, business, and residential infrastructure were constructed. [3] The Arena Pernambuco was a prime example of how the World Cup encouraged mobilization and urbanization of a host city.

The Arena Amazonia, located in Manaus, is situated in the middle of the Amazon rainforest. It is quite an unlikely destination for such a large stadium, as the region has no tradition in football; the local teams fail to attract more than a thousand spectators. [2] However, FIFA and Brazil hoped to bring tourists to the region and preserve the Amazon’s beauty and abundant environmental resources. [6] With seating for about 42,000 spectators, the structure is built on the grounds of the dated Vivaldo Lima Arena.[4] It boasts numerous features to take advantage of its location in the rainforest. For example, rainwater will be collected for watering the pitch, while the region’s abundant sunshine will be harvested to generate clean and renewable energy. [5]

The stadium had plans to be completed by late December 2013 but faced numerous roadblocks during construction and thus was only completed on March 9th, 2014. Tropical winter rain severely hindered construction efforts.[4] Many critics believe the stadium should have never been built. [7] Others argued that it would never reach its maximum capacity and after the World Cup, it is speculated that it will be used as a prison to relieve overcrowding. [2]

The Arena Pantanal was officially opened on April 2nd, 2014.  [2] Seating a capacity of 42,000 spectators, the stadium is founded on sustainability, hence its nickname “The Big Green.” It is situated in the geographical center of South America and is rich in flora and fauna. [10] Even more controversial than Manaus, Cuiaba is a relatively small and remote city with no football tradition – not a single team in the state plays in the country’s top football division. It is also Brazil’s hottest city with temperatures regularly exceeding 40°C. [8] The stadium’s construction was the site of many protests as people were outraged by the exorbitant amounts of money being spent on the endeavor. [9] However, the Brazilian government refuted these worries, claiming that the stadium would draw global attention to the national resources of the Patanal wetlands and Chapada dos Guimaraes mountain range and national park. [10] 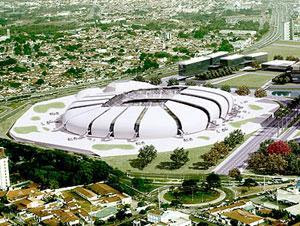 The Arena das Dunas was completed on January 26, 2014 and hosted four group matches during the 2014 World Cup. It was constructed on the old site of Machadao Stadium with seating for 43,000 spectators. [2] After the World Cup, it will become the home of America de Natal. The top three teams in the state of Rio Grande do Norte are from Natal, so there already exists a strong football culture and passion in the region. [11] The stadium is most notable for its design, which was inspired by Natal’s famous sand dunes. It boasts an upper tier and roof in the shape of petals that allow for the on-shore sea breezes to flow into the stadium during matches. [12]

The largest stadium in Brazil, Maracana, was unveiled on June 16th, 1950 to host the 1950 World Cup. Brazil just fell short of clenching the championship title for the host country, losing to Uruguay in the final 2-1 that year. It was the world’s largest stadium when it was inaugurated and was the largest venue of the 2014 World Cup, seating a capacity of 80,000 spectators although it once hosted over 200,000 fans. [2] To accommodate for the games, the original two-tier seating bowl was renovated in June 2013 to give way to a one-tier bowl to provide improved visibility. The concrete roof has been replaced and refurbished with fiberglass. [13]

Located in the capital of Rio de Janiero, the stadium hosted seven matches during the competition, the most of any venue. It serves not only as a historic soccer landmark, but as a national symbol for Brazilian fame as Rio’s second most popular tourist attraction. [2] Hundreds of thousands of visitors flocked the stadium, even during renovations. It officially reopened on June 2, 2013 in a match between Brazil and England in the Confederation’s Cup that ended in a 2-2 draw. [14]

The Itaquera Arena, also known as the Arena Corinthians, hosted six World Cup matches including the Opening Match. It has a seating capacity of 48,000 but for the purpose of the World Cup, another 20,000 seats were added.[15] Located in Sao Paulo, the stadium sits in one of Brazil’s most culturally vibrant cities that is considered the cuisine capital. [2] Construction began in mid 2011 and was slated to be complete by December 2013. However, when a part of the roof structure collapsed after a crane crashed on November 27th, two workers were killed. This not only significantly stifled the construction process, but also generated many worries about the safety and ethical concerns of World Cup construction workers. The construction was finished on May 18th, 2014, less than a month away for it’s June debut. More about the incident can be read here.

Estadio Mineirao is located in Belo Horizonte in the southeastern region of the country. It opened on September 5th, 1965 after about three years of speedy construction. It seats a capacity of 64,000 spectators, but once sat 132,000 people in 1997 during a match between Cruzeiro and Villa Nova in the final match in the state league. [16] It is currently home to the matches of Cruziero, Atletico Miniero, and the Brazilian National Team. The redevelopment of the existing stadium was completed in December 2012 in preparation to host the 2013 Confederation’s Cup. Here, Brazil topped Uruguay 2-1 in the semi-final match to go onto win the tournament. It was the second largest stadium in the 2014 World Cup behind Maracana. It hosted six matches during the competition.[2] Located on an island previously occupied by a Brazilian army depot, the Arena de Baixada is the oldest venue of the tournament having been built in 1914 and then renovated in 1999.  [2] The stadium was upgraded before the games began with extra pitchside seats. Plans to have a retractable roof were abandoned in order to assure it was ready in time. [17] Despite its age, it is considered one of the most modern stadiums as it offers free wi-fi and a central surveillance system. It seats a capacity of 41,000 spectators and hosted four group matches during the competition. It is one of three privately owned stadiums that were used for the World Cup alongside Arena Itaquera and Arena Biero-Rio. [18] As the second largest stadium in the World Cup, The Estadio Nacional hosted seven games during the competition, including Brazil’s final group game. [2] After the city’s old Estadio Nacional was demolished, this new stadium showcases a lowered pitch with metal roof and stands that seat 70,000 when it was completed in May 2012. [20] Located in the Brazilian capital, the stadium represents Brazil’s status as a world leader in sustainable urban construction as it was founded on carbon neutrality, environmental friendliness, recycling, and complete access to public transport. [19]

The Arena Castelao was originally built in November 1973 as an initiative of the state governor Placido Castelo for whom the stadium is now named. “Castelo” also means “castle” in Portuguese and many fans associate its architecture to be castle-like. [21] It is located about 10 kilometers from the city center of Fortaleza that is renowned as one of Brazil’s most vibrant cities. Fully renovated in December 2012, the Arena Castelao is now an all-seater stadium with a large roof and underground parking lot. [2] The stadium hosted six matches during the World Cup and has a seating capacity of 67,000 spectators. FIFA was very pleased with the efficient pace of work in Fortaleza. [22]

The Arena Fonte Nova was modeled after the original Estadio Octavio Mangaberia that once stood in its place and was especially built to cater for the World Cup, with a seating capacity of 52,000. [23] The stadium complex includes a panoramic restaurant, a museum of football, parking garages, shops, hotels, and a concert hall. [25] The stadium officially opened in April 2013 but a month later, one of the 36 roof panels collapsed due to torrential overnight rain. The incident was not detrimental, as the stadium reopened soon after to host games during the 2013 Confederation’s Cup. [24] Additionally, the surrounding city of Salvador has a rich culture heavily influenced by Europe and Africa, as it was the principle landing point for the slave trade. [26]

The Estadio Biera-Rio is the largest football stadium in the south of Brazil and has its nickname “Gigante do Beira-Rio” (“The Giant of Biera-Rio). [27] It is situated on the banks of the River Guabia about 3.5 kilometers from the city center, and is the home of Internacional. [2] It officially opened on April 6th 1969 but since then, the stadium was revamped in preparation to host five World Cup matches. A metal roof was installed to cover the stands, ramps, and turnstile areas.  The redevelopment of the infrastructure met financial difficulties which delayed its process. [28]

Return to Table of Contents

How to cite this page:
“An Overview of the Stadiums,” Written by June Zhang (2013), Edited and Updated by Brian Wolfson (2015), World Cup 2014, Soccer Politics Blog, Duke University, http://sites.duke.edu/wcwp/world-cup-2014/world-cup-2014-fan-guide/anglophone-version/an-overview-of-the-stadiums/ (accessed on (date)).

One thought on “An Overview of the Stadiums”