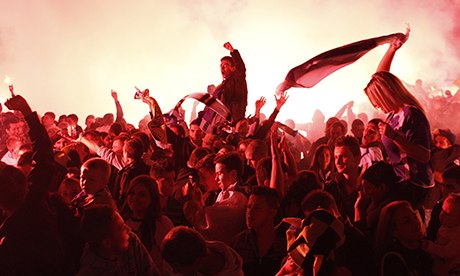 Americans who have heard of Bosnia and Herzegovina likely conjure images of the tragic war and ethnic cleansing among Muslims, Serbs and Croats in the former Yugoslavia that erupted after the fall of the Soviet Union in the mid-1990s (1). The Bosnian Football Association was established only in 1995, when Bosnia and Herzegovina lost 2-0 to Albania in shirts they bought at a sporting goods store the day of the match (2). The British newspaper The Guardian described Bosnia and Herzegovina as, “The poorest country in Europe, with a population of less than four million, with a terrible domestic league and destroyed infrastructure had secured a place at the World Cup” (3). Bosnia’s football team though, boasts top talent, including Manchester City’s towering striker Edin Džeko, captain Emir Spahic, who plays in defense and for Bayer Leverkusen, and Miralem Pjanic, a star playmaker in midfield for Roma.

Solid from the Start

Drawn into a relatively weak Group G in European qualifying, Bosnia and Herzegovina was quick out of the gates, beating Liechtenstein 8-1 and Latvia 4-1 (4). But Group G was always going to be a battle between Bosnia and Greece. Their first match of qualification was a close encounter in Piraeus, Greece on October 12, 2012. Bosnia was able to hold on for a 0-0 draw in which they more than held their own (5). Spahic and goalkeepr Asmir Begovic, who plays for Stoke City in England, led a stout defense that wound up conceding just six goals throughout qualification.

When Bosnia and Greece met again on March 22, 2013, they were tied atop Group G with ten points apiece. The Bosnians dominated from the start, playing exciting, attacking football that earned them a 3-1 victory to put them three points ahead of their rival (6). Džeko scored two headers to sandwich a a a penalty, setting the Bilino Polje Stadium in Zenica alight (see video below for highlights). Fanis Gekas scored a consolation goal for Greece in stoppage time, but that was not enough to ruin a glorious win for the hosts, their most impressive of the tournament.

The lowest point of Bosnia and Herzegovina’s qualification came on September 6, 2013, when the squad lost to Slovakia 1-0 at home in Zenica (7). The loss to Slovakia was their only one of qualification. Viktor Pečovský scored from 27 yards out to shock Bosnia and Herzegovina and imperil their chances of winning the group. Bosnia’s forwards struggled all game, unable to threaten seriously the Slovakian defense. Greece took advantage of the loss to go even on points, meaning that the Bosnians could not slip up in any of their remaining matches.

The television announcer for Bosnia and Herzegovina erupted when Ibišević scored the winning goal.

After Bosnia and Herzegovina’s victory over Lithuania, 50,000 supporters crowded the streets of Sarajevo, the capital, and lit flares in celebration (see video below). Given the country’s troubled past and present, the success of its national football has become perhaps the largest source of national pride for Bosnians. To be certain, during the celebration, the team greeted its fans from a balcony and the crowd chanted “vi ste ponos drzave,” which translates to, “you are the country’s pride” (9). While football will not solve Bosnia and Herzegovina’s fundamental issues, the national squad seems to have become a powerful symbol of hope and pride for the young nation.

Bosnia and Herzegovina were drawn into Group F for the World Cup along with Argentina, Iran and Nigeria (10). In the first match, the Bosnians faced heavy group favorites Argentina, featuring a terrifying attack spearheaded by arguably the world’s best footballer, Lionel Messi.  The Argentinians got off to a strong start with an early goal inside of three minutes.  The aforementioned Messi scored a second for Argentina midway through the second goal, rendering a late goal by Ibisevic insignificant as the Bosnians fell 2-1 to the behemoth (11).

Already on the brink of elimination, Bosnia and Herzegovina needed at least a draw to keep their hopes alive to move onto the knockout stage.  Their second match placed them against a Nigerian team who just played Iran to a scoreless draw (12).  Unfortunately, the dream came to an early end for Bosnia as a first-half goal by Peter Odemwingie was the only score of the game, eliminating the Bosnians from the tournament (13).

Although they were already eliminated and were facing a squad in desperate need of a win in order to advance, Bosnia and Herzegovina came out strong against Iran, their third and final opponent of the 2014 World Cup.  For more on Iran’s qualification, click here.  The result was a decisive 3-1 victory for the Bosnians, resulting in their sole three points of the tournament, leaving them third in Group G, behind Argentina and Nigeria, and ahead of recently-vanquished Iran (14).

Edited and updated by Jake Toffler in 2015