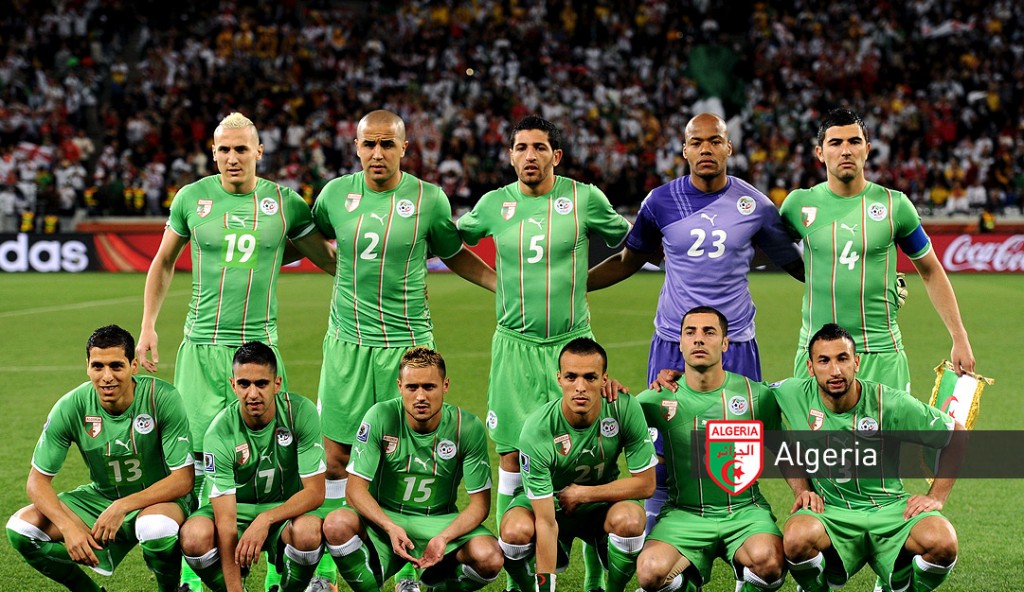 Let’s be honest, what does everyone think of when they hear the words “Algeria” and Soccer”? (Hint: see video).  “Oh that’s the team that the United States knocked out of the 2010 World Cup!” – most Americans would say.  In reality, during the 2010 group stages, Algeria wasn’t even in a position to advance to the knockout round as they had already been statistically eliminated (1).  Of course Algerian fans were upset that they did not advance, but the honor of having qualified was in itself enough to bring joy to both the team and the nation.

Algeria’s national soccer team joined FIFA in 1964, two years after the country itself was founded (2).  Since their genesis, Algeria had only been to two World Cups, 1982 and 1986, before being invited to South Africa in 2010 (3).  Qualifying for the World Cup in Brazil was epic for the country as it marked two consecutive trips that the team would go to the World Cup, as well as their fourth overall qualification (3).  The team has become a consistent threat to earn a World Cup berth every four years as they continue to shoot up the FIFA world rankings, currently sitting at 18 (4).

Algeria is a part of the Confederation of African Football (CAF) region which is made up of 52 total countries throughout Africa.  Although this region isn’t completely top heavy with only three teams in the top 25 rankings, it might be the most competitive considering 27 of the 52 teams are ranked in the top 100 (4).  Unfortunately, only five spots are reserved for teams from this region.

During the 2014 World Cup Qualifications, a total of three tournament rounds were conducted to determine which teams would receive the five berths.  Algeria received a bye into the second round and advanced into the third round by winning its group over Mali, Benin, and Rwanda.

With only 10 teams left, Algeria was randomly drawn to play a home and away playoff against Burkina Faso, who was ranked 51 in the world.  The first game was played in Burkina Faso, and Algeria dug itself into a little bit of a hole as they lost the first game 3-2.  Controversy did arise from this game as there was a questionable penalty decision that provided Burkina Faso with the game winning penalty kick goal with only four minutes left (5).  Actually, the call wasn’t even questionable, it was just blatantly wrong.  The Algerian defender Belkalem wasn’t even in the penalty box. Fortunately for Algeria, they did score two away goals which is the official tiebreaker for even aggregate scores.  Unless the second leg of the playoff had been an extremely high scoring game, Algeria would just need to win.  So simple right? Wrong.  Burkina Faso played back almost the entire game and refused to take any risk as an attempt to shut out Algeria.  Finally, Algeria broke the shut out by scoring in the 49th minute.  This score held to the end and Algeria won in their home stadium by the score of 1-0, making the aggregate score 3-3 which allowed Algeria to claim the fifth and final CAF berth to advance into the 2014 World Cup.  The boundless joy and enthusiasm when the deciding goal went in and the result was finalized was clear to see:

Unfortunately, the Algerian fans celebrated a little too much following the victory.  Hundreds of injuries and a total of 12 deaths resulted from the streets being full of excited fans (6).  This type of occurrence isn’t uncommon in Algeria, and because of this the government consistently works hard to try combat this type of celebration in order to ensure everyone’s safety during large national celebrations.

Algeria received the draw into Group H, along with Belgium (11), Russia (22), and South Korea (54) (Parentheses indicate FIFA ranking). Before the start of the tournament, Algeria had an  11.4% chance of advancing to the knockout round (7) and overall odds of winning the entire tournament of 1500/1 (8).  Despite Algeria’s surprising back to back World Cup berths and recent success in African play, it was hard to picture Algeria achieving too much success in Brazil. As a result, I initially predicted that although Algeria did get slated within a weak group, I still didn’t see them advancing into the knockout rounds.

Ultimately, Algeria did end up making it through the group stages ahead of Russia and South Korea. In the Round of 16 they faced the German team, who would go on to win the 2014 World Cup. In a breathtaking match, Algeria forced the formidable Germans into extra time with some solid defending. Algeria certainly had some opportunities to inch ahead of the Germans, but were not able to capitalize. It was a valiant effort nonetheless by the Algerians and I look forward to see what they bring to the table in 2018!

Watch the video below for more highlights of Algeria’s road to the Brazilian World Cup.

Edited and Updated by Aissa Huysmans in 2015.