Back to Brazil: More than Soccer, Samba, and Carnival

Beginning in 2012, many of Brazil’s major cities such as Goiânia, Natal, Porto Alegre, São Paulo saw an increase in bus and train fare costs of about 30 centavos per ride [1]. Initially, this set off small scale protests, which the government tried to quell by “cancelling” taxes on bus fares. But this failed to stop an increase in bus fares, which set off perhaps FIFA’s worst nightmare on the eve of the 2013 Confederations Cup, which was supposed to be the Brazilian Football Confederation’s coming out party for the 2014 World Cup [2]. 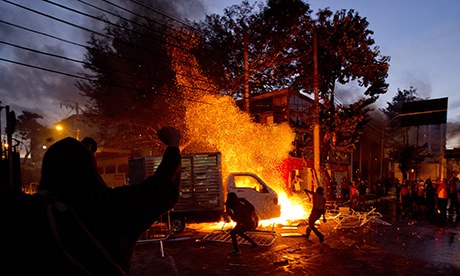 Organized using social media, over 2 million people protested in the streets of Rio de Janeiro, São Paulo, Goiânia, Manaus, Brasilia, Porto Alegre, Belo Horizonte, Salvador, Natal, Recife, and Cuiabá, and others. In addition to being Brazil’s largest cities, these locations are dispersed throughout the country, so they were chosen as venues for the 2014 World Cup. Thus, these protests signaled a deep dissatisfaction with both the Brazilian Government and FIFA, perhaps foreshadowing similar events for 2014 when the world’s gaze will be be on Brazil.

Background to the Protests: Corruption and Backbending to FIFA’s demands

Corruption in Brazil is a pervasive social problem. This is not surprising– Brazil is a quickly developing country that has seen over 40 million people lifted out of poverty in just the last decade. And like other growing nations, it faces the problem of corruption, as poorly paid government officials take bribes to supplement their income. Before beginning discussion on the corruption that led to the 2013 protests, it’s prudent to note that that the corruption found in Brazil is not any more extreme than that of similarly developing nations such as Turkey and India, which saw their own anticorruption protests recently.

But corruption is an undeniable part of Brazilian politics and life. This is especially true in the highest levels of government; administrations have used government money to pay for pet projects, handing out contracts to friends and family in return for a cut of the profits.  Over the last few years, Brazil has been rocked by the mensalão scandal [3], a vote buying scandal in which the ruling PT Party was paying certain congressional opponents a monthly stipend for their vote. Since Brazilian politics is intertwined with the media and business, this quickly enmeshed many of the leading figures of Brazilian society. The President, Lula Da Silva, was implicated by the involvement of his chief of staff, José Dirceu, and his administration almost collapsed.  This was, however, only one of many scandals that have plagued Brazil recently. Indeed, the cost to Brazil of corruption in government was estimated to be 53 billion dollars in 2013 alone [4]. The problem is that the cost to Brazil for the 2014 World Cup is expected to be 14 billion dollars at minimum [5], about three times what South Africa Spent just 4 years ago. This is a staggering amount in a nation that only spends 37 billion dollars on education. Investments in stadiums and hotels benefit the construction companies, many of which are among the PT Worker’s party’s biggest campaign donors. Additionally, much-needed infrastructure projects are being ignored[5]. Massive stadiums are being built in cities with no large professional teams; the cities of Manaus and Cuiabá are building large stadium with no plans for any future tenants. The money earmarked for infrastructure projects is being spent on widening roads, thoroughfares, and viaducts. Brazilians, on the other hand, largely use public transport, so this infrastructure push is designed for visiting tourists, not the average Brazilian.

These projects have also been plagued by budget irregularities, poor construction, and unsafe working conditions. The Arena Amazonas in Manaus, the Maracanã in Rio, and the Estádio Nacional in Brasilia have gone well over budget, while Brazil has thrown more money at these projects in lieu of cracking down on the corruption there.  Money has been spent on a 140 million dollar aquarium in Fortaleza when that state was facing a massive drought [5]. In November 2013, 2 workers died when a crane collapsed on them in Itaquerão stadium in Sao Paulo [6].

Additionally, more than 170,000 people have been evicted from their homes in the favelas of Brazil. These evictions are often violent, and sometimes happen overnight. You can read more about this in the following page: The Favela

And lastly, the Brazilian government has passed “Exceptional laws” to cater to FIFA’s demands. These laws override existing laws, and allow certain actions to be performed that would otherwise be illegal. For instance, these laws allow states and cities to incur higher debts for the World Cup than otherwise permitted. In addition, at FIFA’s demand, the country has set up a 2 km “exclusion” zone around each stadium. Within this zone, FIFA has power over who enters these areas and what is sold, essentially superseding the authority of the Brazilian state. Only goods approved by FIFA can be sold here– thus, a restaurant in this zone could be fined for selling Pepsi instead of Coca Cola (which sponsors the World Cup). Additionally, traditional Brazilian stadium fare, such as Salvador’s Afro-Brazilian deep fried acarajés, cannot be sold [5]

Exceptional laws have also included a draft law that established the crime of “terrorism.” This is a particularly sticky topic for many Brazilians, as such a law was used by Brazil’s military dictatorship in the 1980s to suppress dissent. Social movements fear that such laws could be used to suppress political protests. The Country has also set up special “World Cup Courts.” [7]. Supposedly created to reduce crime and speed up the often lethargic Brazilian courts, protesters fear that  these will be used to suppress dissent.

Another major complaint of the protesters stems from the massive corruption in the Confederação Brasileira de Futebol (CBF).  Until 2012, the head of the CBF was a man called Ricardo Teixeira [8]. The son-in law of FIFA’s longtime president João Havelange. Teixeira was known to be extremely corrupt– he is known to have stolen around 10 million dollars during the ISL scandal, and to have had a “relationship” with Nike in which he would receive a cut of their merchandise sold in Brazil. Because commercial bribery was not a crime in Switzerland where these events occurred in the 1990s, Teixeira has faced no consequences. Teixeira is also known to be a bit of a bully. After the BBC’s panoroma show did a report on corruption in the CBF, he threatened England’s Football Association and said he would “make their lives hell.” He is widely believed to be one of the reasons England lost it’s bid to host the 2018 World Cup  [8].

In 2012, when the weight of these allegations became too much for even the CBF, he was forced to “resign” and now lives in a multimillion-dollar mansion in Miami. He was replaced by José Marin, a man known for his support of the Brazilian Military dictatorship in the 1980s, who is also known for stealing the medal of a player at an awards ceremony

Due to the behavior of such “outstanding” gentlemen, it is easy to see why the CBF is held in such low regard. One of the fiercest critics of the CBF is the former star Romario, who won the golden ball at the 1994 World Cup [9] 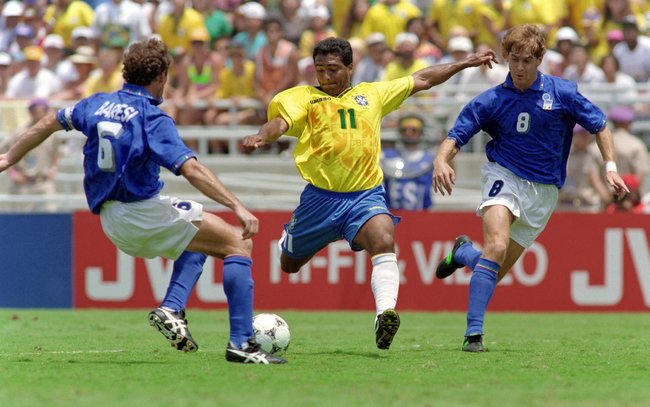 Romario has called the CBF a “disgrace,” and believes that Teixeira is “directly a part of everything that has been evil in Brazilian football for the last 10 years.” According to Romario, FIFA has robbed the Brazilian public and the country will be worse off because of the tournament. He believes, like many protestors, that the money could better have been spent on improving services in Brazil. As someone who is interested in running for politics in Brazil, his criticisms resonate with the public [9].

So while the straw that broke the camel’s back may have been the implementation of the bus tax, there were many underlying factors behind the 2013 protests in Brazil. Starting in Goiânia, the protests spread across the country. The largest protests were in Rio de Janeiro, where almost 400,000 people were present[10].

The protesters had several demands, some relating to the expenditure of the sporting events. They wanted more spending on public transportation, education, hospitals, and science. They also wanted Brazil’s taxation rates to be reduced. At 36%, the nation’s income taxes are the highest in the developing world and are higher than some Western countries. Despite this, the nation still has poorly functioning health services, a low education rate, inadequate welfare benefits, and a growing rate of unemployment. The protestors also demanded that royalties from Brazil’s newly discovered oilfields be used to promote social welfare [10].

They also wanted to repeal and prevent passage of laws that would hinder the fight against corruption. Most significant was a law called PEC 37 (BBC New 2013). PEC 37 would have limited the ability of federal prosecutors to investigate crimes. Federal prosecutors in Brazil are widely respected, and are considered less corrupt than other institutions of the state. They have instigated many anticorruption efforts, including the stories that broke the meselao scandal. PEC 37 would have removed such powers, and assigned them exclusively to the police, who are among Brazil’s most corrupt institutions.

While the protests were mostly peaceful, there were some instances of violence. Some groups tried to storm the CBF headquarters in Rio, and while others stormed the National Congress Building in the capital. Protesters also tried to disrupt the final of the Confederations Cup between Spain and Brazil, but were turned back near the stadium.

Ultimately, these protests were partially successful. PEC 37 was defeated in the Brazilian Congress, and the Senate voted to spend 75% of oil revenues on education and 25% on health infrastructure. They also agreed to increase the number of doctors and allow new prosecutors in the fight against corruption. However, many protesters remain unsatisfied- they believe that only with more action can changes truly be implemented

How to cite this page: “Corruption and the 2013 Protests in Brazil,” Written by Vishnu Kadiyala (2013), World Cup 2014, Soccer Politics Blog, Duke University, http://sites.duke.edu/wcwp/world-cup-2014/politics-in-brazil/corruption/ (accessed on (date)).

3 thoughts on “Corruption and the 2013 Protests in Brazil”