After its founding in 1882, Ireland had a string of unsuccessful campaigns in the British Home Championship. Seventeen years later, in 1899, Irish FA changed its policy so that non-Irish club players could join the national squad. In a March 4, 1899 game against Wales, four Irish players who competed in England were allowed to partake as part of the Irish team. The change paid off, and Ireland won.

In 1920, the island of Ireland would change drastically, as the Government of Ireland Act 1920, also known as the “Partition of Ireland”, divided the country into Northern and Southern Ireland. Two years later, in 1922, Southern Ireland became independent, and established itself as the Irish Free State, which would later evolve in the Republic of Ireland (what most people refer to as “Ireland” today). During this political turmoil, a new football association, the Football Association of Ireland (FAI), emerged to compete against the Irish FA. The FAI created its own separate league and international team. Two years its establishment, the FAI was officially recognized by FIFA as the governing body of the Irish Free State. Meanwhile, the Irish FA continued to draw its players across the entire island. 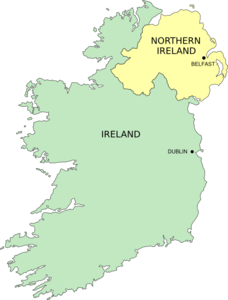 For an eighteen year stretch from 1928 to 1946, the two existed harmoniously, as the IFA was still not associated with FIFA. Therefore, the two simply did not partake in the same competitions. However, conflict emerged in 1950, when the IFA played a World Cup qualifier against Wales using four players from the Irish Free State. These four players had already been a part of the World Cup tournament under the FAI. The FAI filed complaints with FIFA until they finally interceded. From then on, player eligibility between the two associations was officially determined by the political borders. They also ruled that neither could use the name “Ireland”, and thus FAI turned into the Republic of Ireland, and the IFA became Northern Ireland.

< Back to Northern Ireland Guide