Neymar, whether you like him or not, is definitively one of the best players in the world right now.  His speed, skill, instinct, and ingenuity on the field set him apart from almost every other striker.  Born and raised in Brazil, Neymar has only ever played for Santos FC and FC Barcelona, but he has accomplished a great deal in his short career including coming in third place for the 2015 Ballon d’Or behind Cristiano Ronaldo and his Barcelona teammate Lionel Messi.  His skill and speed have even earned him comparisons to another Brazilian legend, Pele.  In terms of his international career, Neymar played for Brazil’s U17, U20, and U23 teams before joining the men’s senior national team in 2010.  Since joining the team, he has scored an incredible 56 goals in just 70 appearances.[4]  Despite his efforts and acclaim, however, Neymar’s presence on the team has not changed much in terms of Brazil’s international success.  He led the team to a bronze medal at the 2012 Olympics, but other than that, Brazil has won no major international titles.  This lack of success culminated in a scathing 7-1 defeat to Germany in the 2014 World Cup.[1] 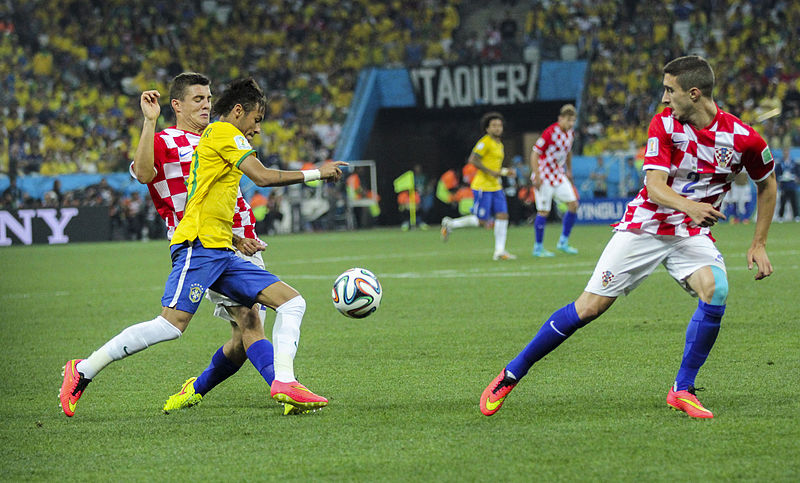 Neymar would be an incredible asset for a Brazilian team that is eager to prove its worth and to redeem itself in the upcoming Copa America Centenario.  This is Brazil’s chance to show the world that it is still competitive on the international level.  The only problem is that Neymar isn’t going to be allowed to play.

The upcoming Copa America Centenario will be a major international tournament, and FIFA is requiring clubs to release their players to play for their national teams.[5]  For the upcoming Olympics, which will be in August, FIFA only requires clubs to release their players who are younger than 23.  Sadly for Neymar, who is currently 24, this means that Barcelona is only required to let him play in the Copa America but not the Olympics.  Barcelona’s other star striker, Lionel Messi, is in the same position with the Argentinian national team.  In order to give their players adequate resting time between club seasons and to minimize the risk of injury, Barcelona has made the decision to let their players play in either the Olympics or the Copa America, but not both, and they have given the players the ability to choose.[1]  Faced with this decision, Neymar has chosen to compete in the Olympics, and Messi will be representing Argentina in the Copa America.[2]  Brazil will likely be fighting Barcelona in the months to come before the tournament, but Barcelona is equally steadfast in their position.

The Brazilian team without Neymar will be an interesting team to watch.  Without their star player, the Brazilian offense will be significantly handicapped.  The other Brazilian strikers are by no means bad, but they will have to work very hard to fill Neymar’s shoes.  Brazil has a long history of excellence in football, and although they have been in a bit of a slump lately, they are still a strong team.  How Brazil adapts to playing without their star forward should prove to be very interesting.  While Neymar is not a player to look out for in this tournament, he is a player whose absence should be noticed.