There are not many cities in the United States that have as rich a cultural history surrounding soccer. Philadelphia can trace the “kicking” game far back in its history. Besides the rich culture surrounding soccer, Philadelphia brings groups of fans that are unlike no other. One of their current MLS supporting groups was instrumental in the development of a team in this city of brotherly love. Find out more about what soccer means to Philly and what Philly means to soccer below.

The History of Soccer in Philadelphia

In 1894 after a meeting in New York the American League of Professional Football (ALPF) was formed with charter franchises created in Baltimore, Boston, Brooklyn, New York, Washington and Philadelphia. After that the Philadelphia Phillies were born, opening their first season on October 6, 1894 in front of 500 spectators. The ALPF would fold before the end of the first season due to poor attendance and high operating costs. This would not prevent the Phillies from continuing to play. The Phillies would be instrumental in bringing soccer back to collegiate sports even playing against Princeton in November of 1894 (Philadelphia Union 2016 A).
Soccer in Philadelphia did not stop with the dissolution of the ALPF. In 1908 there was a new set of players on the block, or 69 miles from the city itself, called Bethlehem Steel. Bethlehem Steel FC would join the Allied American Football Association (AAFA) in 1912 after an undefeated season in the Eastern Pennsylvania League. During their time in the AAFA Bethlehem Steel would win the league championship two years in a row as well as the Allied Cup tournament and the first American Cup Championship. In 1914 the club moved to the American League of Association Football Clubs for a year where they won both the league and their first US Open Cup. After finishing out that season the Steel moved again to the American League of Philadelphia coming in second in the league and winning the American Cup and the US Open Cup, the first club to do so. Their success continued in 1921 after the formation of the American Soccer League (ASL)  when they played as the Philadelphia Field Club for one season. They would win the ASL Championship that year as a Philadelphia based team before returning to Bethlehem. The club would remain solvent until 1930 winning another ASL championship, two Eastern Soccer League championships, one Lewis Cup championship, another American Cup championship, and one more US Open Cup championship (Farnsworth 2013).

The Bethlehem Steel circa 1921. Image retrieved from Wikimedia.

Skipping ahead to more recent years, in 1973 the Philadelphia Atoms were born. During their home opener the Atoms beat the North American Soccer League (NASL) record drawing 21,700 fans. During the rest of the season the fans kept returning, averaging 11,382 per game almost twice the league average. That first season the Atoms only lost 2 games the entire season and went home with the Eastern Division title (Holroyd 2013). For the next two seasons the Atoms would not make it to the playoffs. They would finish third in the Eastern Division in 1974 and fourth in 1975 (Farnsworth 2010).
1977 brought the fall of the Atoms and the rise of the Fury. The Fury was known for its distinctive owners, a list which belonged as much in a Rock and Roll Hall of Fame as it did on a soccer team. Owners included Rick Wakeman, Peter Frampton, and Paul Simon to name a few (Holroyd 2015 A). The Fury would never gain the ground that the Atoms had had, averaging 8,279 people in attendance per game. This placed them 18 out of 24 NASL teams in attendance (Holroyd 2015 B). 1980 brought the death of the Fury, a team which had never really gotten its legs either in ownership or in physical success (Holroyd 2015 C).

The Fury playing in 1979 against the Houston Hurricane

Three decades later Philadelphia got their next team. In February of 2008 Major League Soccer awarded the city the league’s 16 team. The Philadelphia Union played their first game on April 2010 (Philadelphia Union 2016 B). The return of soccer to Philadelphia was in large part due to the demonstration of fan support by the Sons of Ben. The creation of this team was “a dream come true” according to one fan (Jasner 2008).

A brief documentary on the Sons of Ben

An example of a Sons of Ben chant.

Please note: some language may not be safe for all viewers.

Unlike the Sons of Ben, the other social organizations were created within the PPL Park Stadium. The Tammany Saints founded in 2009 make it their goal to enjoy the game in section 101. While the IllegitimateS work to “Defend the Corner” from section 133 just below the area for away fans. The Bridge Crew emphasize good sportsmanship from their two sections, 120 and 121, and have been doing so since 2011. Finally The Corner Creeps founded in 2010 are located in section 134 on the River End side of the PPL Park (“Supporters Groups” 2016). While these organizations are not an example of every soccer fan in Philadelphia they do demonstrate the vast love for soccer that the city and the state has.

Lincoln Financial Field, or the Linc as some fans call it, has been used primarily as a football stadium for the Philadelphia Eagles. The Eagles, who had been sharing Veterans Stadium with the Philadelphia Phillies began their journey to a new stadium in the early 1990’s. It took two owners, many years, and millions of dollars but construction finally began on the stadium in April 2001. The Eagles played their first game in the stadium in September of 2003. The complex was updated and expanded again in 2013 bringing the seating capacity up to 69,176 (Stadiums of Pro Football 2016). 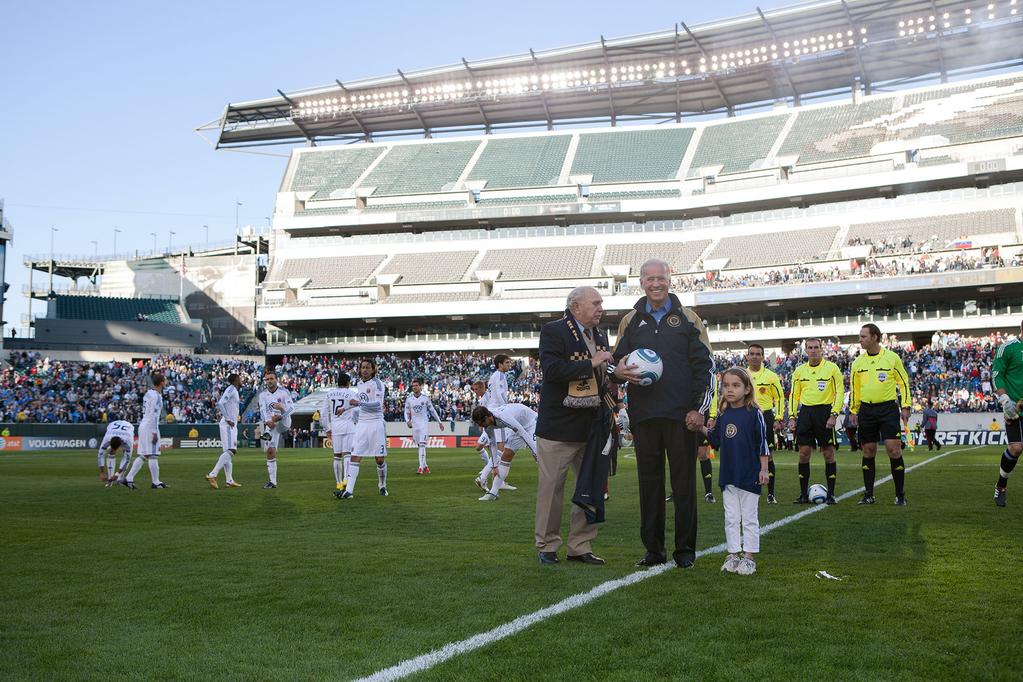 Even before the creation of the Philadelphia Union there were soccer matches being held within the Lincoln Financial Field. In fact it was a soccer game between Manchester United and Barcelona that first graced the field in August of 2003. The field would then be home to the 2003 Women’s World Cup, the 2009 CONCACAF Gold Cup, the first Union home game in 2010 as well as a sprinkling of exhibition games between international teams (Tannenwald 2015).

Holroyd, Steve. 2015 A. “Enter the Fury: History of the Philadelphia Fury, Part One.” The Philly Soccer Page, November 30. http://www.phillysoccerpage.net/2015/11/30/enter-the -fury-history-of-the-philadelphia-fury-part-one/.