Link back to Women’s Soccer After 1999

The 1999 Women’s World Cup drastically changed the view of women sports and in particular, turned the women’s soccer team into a symbol for the country.  Prior to the World Cup, women’s sports in general were not taken very seriously.    The tournament itself, but especially the way in which the United States won the World Cup, raised awareness in and popularity of women’s sports and soccer.  It was not only the number of people who watched on television, or the amount of the media or number or people in the stands, it was the spotlight that was placed on the American team, “A women’s sporting event had never been played on such a grand stage as the World Cup, out from behind the curtain of the Olympics, able to breathe its own air, cast its own light.” [1] This grand stage that the American team was able to play on, gave little girls across the country women to look up to inspire them and give them role models.

The famous World Cup game where the Americans beat China 5-4 in penalty kicks was ten years ago. After the game there was an expectation for women’s soccer and sports to really take off, but this was not the case.  Christine Brennan, a writer for USA today, took a look at the 1999 team, and what it has meant to women’s sports and how it has affected our country since that time.  She notes that there are positives and negatives to that women’s sport.  The positive note is that it made such an impact at the time and gained lots of notoriety, but as Brennan explains, “But it’s not so good because no other women’s sports event has reached a level of such significance since.

If there is one thing that was a breakthrough for women because of the women’s world cup, it is the traditional gender roles in sports that were broken through their great run.  There is a standard stereotype even through 1999 that women have to be athletic and beautiful, while as men do not have to worry about this issue.

Just look at the uniform unveiling for Women’s Professional Soccer. The players are turned into runway models, having their hair and make-up done before showing their stuff in front of the audience. This would never happen in the MLS.

Even the women on the team acknowledged that there is a difference in personalities and athletes between men and women, but this is discussed only in terms of how that affects coaching them, not the way they should be viewed.  This team tried to defy all stereotypes that women are not as competitive or athletic as me. They sought to banish the notion that men can only be interested in women’s sports if the women they are watching are attractive.  Even though some of the qualities about this team were toughness, competitiveness, and great team chemistry, they still were not able to break the barriers of this gendered view of women in sports.

After their amazing World Cup run the team received and incredible about of media hype; however they received publicity for more than just their athletic abilities on the playing field.  One such instance was when Team USA appeared on the David Letterman Show.  While on the show, Letterman discussed the women’s talent on the field, athleticism, and how these women had become great role models. However, he couldn’t leave out the fact that they were also attractive, ““They’re just hot…Certifiably babes.””[2] Naturally, the players thought it was all in good fun, and never seemed to have a problem with it.  Even though they did not create uproar, there was much debate within the team, and with “officials, expert observers, feminists, and the media about the roles that gender, sex and beauty played in the popularity of the team and about the manner in which it was portrayed to the public.”[3] Allen Guttman, author of The Erotic in Sports, hints that just because people acknowledge the player’s body, does not mean that they aren’t interested in how women play.  Although it is important to acknowledge that there is not such talk like this in men’s sports, certain athletes might be portrayed as good looking, but there is not such a distinction like there is in the case of women.

Although the soccer team, for better or worse, was portrayed as these hot female players who were also athletes, the individuals from the team did participate in this “sexualization.”[4] One of the players, goalkeeper Briana Scurry, claimed that it did not matter what made people watch the games, because they realize once the game starts that the women they are watching are athletes and competitors.

“I don’t think you have to run around naked to sell the game, but it’s good at least be on the minds of the people, I don’t think it’s degrading.  People who see us on Letterman and come to the game realize we don’t just strut around in our little skirts.  Women play just as hard as anybody.”[5]

Another player, Julie Foudy, understands that “You’re never going to escape sexual references with women.  If we can make sure we’re successful on the field, I think people will come for the product, rather than what the product looks like.”[6] The overall concept of the way gender roles have a big affect the way women are looked at in sports.  I don’t feel it is possible for women to escape this stereotype, whether it is fair or unfair.

One player in specific who made a big name for herself from this portrayal of women in sports is Brandi Chastain.  She became famous for her game-winning penalty kick, but more for her celebration during which she slid to her knees and took off her shirt to in celebration.

This led the discussion about the attractiveness of women on the team, and of course the topic of the infamous sports bra. It is debatable whether Chastain’s celebratory actions helped or hurt the image of female athletes. On one hand, there is something inherently powerful in being able to be both feminine and athletic, encompassing the many aspects of being a woman. On the other hand, there is a certain danger in the manner in which she grabbed the public’s attention, so they would view only the sexual or “feminine” aspect of her actions, and not be able to celebrate her accomplishments as an athlete as well as the triumph of her teammates for finally being recognized as competitors and athletes.

A reason why it could be looked at as being a negative for the sport is what ensued from her taking off her shirt in her celebration. Chastain accepted an offer to pose nude for Gear magazine. 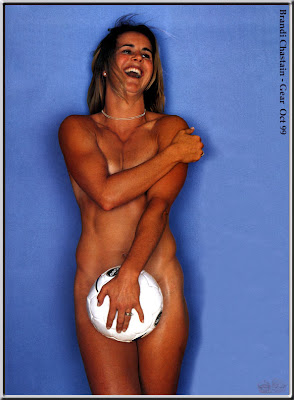 Longman explains, “Had Chastain posed for a more upscale publication, her attempt to portray strength instead of sex may have gained more validity, she said.  De Varona, a 1964 Olympic swimming champion, also felt uncomfortable with the fact that women still have to defend their athleticism by also projecting a feminine side.”[7]

This photo shoot created a lot of stir around the country and sparked much debate about women and how they feel the need to pose in pictures like this. Chastain regretted her posing in Gearmagazine, but more so she regretted the way in which they were displayed.  She consented to take the pictures, but she did not get the rights to the photographs, which allowed Gear to use other suggestive pictures of Chastain. Her corporate sponsors became very concerned about her marketability being damaged by such explicit photographs.  Although these pictures were taken because of Chastain’s reaction after her goal symbolic of her athletic talents, it was her sexual appeal that made it so intriguing for Gear magazine.

On the one hand, Chastain’s famous move could be seen as setting female athletes several decades back in time. On the other hand, it could be looked at as a sign of strength of female athletes, but also just women in particular. Without ripping her shirt off, the U.S. Women’s Soccer Team wouldn’t have made news the way they did, and would therefore not have achieved the level of success that they did. They still would have won, and would have been celebrated as athletes, but not to the same magnitude.   Is it problematic that Chastain’s “moment” had to happen in order for her and Team USA to gain so much popularity and be acknowledged for their achievements? Possibly, but that is just how our world is.

Brandi Chastain taking off her shirt was about the excitement of the victory.  It was not to show off her body. It showed that being a woman did not matter; she could celebrate and show emotion. In “a moment of temporary insanity, nothing more, nothing less,” it does matter if who takes off their shirt out of sheer joy and exuberance. It is a celebration of athletic achievement on the highest level, a mark of the ascendency of women in sports.  It laid a path for women to be independent and pave their own way to success in sports.

The women’s soccer team, and to a greater extent Brandi Chastain, have had a positive impact on the way female athletes are viewed. Despite some controversies in “Babe City,” and the exposure of a little black Nike sports bra they still raised awareness about the way we view female athletes, and how female athletes are measured up against their male counterparts.  Recently, ESPN the Magazine had a body issue in October 2009, where they celebrated the bodies of all types of athletes. They showcased powerful, athletic, bodies that may not traditionally be viewed as “beautiful” women.  This is a at least a step in the right direction, and credit must be given to the 1999 Women’s National team for paving the way for women’s soccer, and for improved perception of the female athlete.