Updated in 2013 by Christina Malliris

The record-setting 1999 World Cup and Team USA popularized women’s soccer in the United States. “The success of Team USA on the field and the success of the 1999 World Cup in garnering the interest and attention of the American public and media put women’s soccer ‘on the map.’”[1] Before 1999 most of the nation did not know who Mia Hamm, Michele Akers, Brandi Chastain, or any members of Team USA were. Yet after their tremendous display of teamwork, talent, and athleticism these women solidified themselves as both celebrities and role models. 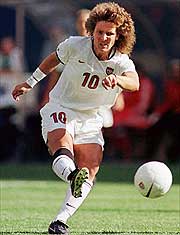 Karen Bokram was right in her prediction of the celebrity status the US team would rise to; “by mid-summer, the whole country will know their names.”[2] Their performance earned the team the honor of Sports Illustrated Sportswomen of the year, becoming the only other team besides the 1980 US Olympic hockey team that defeated the former USSR and went on to win the gold medal, to receive the magazine’s most prestigious honor. [3] “This team did a remarkable job of seeping into the culture quicker than any U.S. sports team in memory. The Americans quickly transcended their sport, then approached a kind of mythical status reserved only for beloved Olympic teams, like the 1980 men’s hockey team that upset the Soviet Union and won the gold medal.”[4]

“The success of Team USA on the field and the success of the 1999 World Cup in garnering the interest and attention of the American public and media put women’s soccer ‘on the map.”[5] The institution of a women’s professional soccer league in the United States only seemed fitting after Team USA set the world on fire with their performance in the ’99 World Cup. Just two days before the final match of the 1999 World Cup, U.S. Soccer announced its intentions to start a women’s league and that it would be investing $250,000 to explore the feasibility of fielding 12 teams across the country. [6] For many the success of 1999 was a prophecy of what was to come for women’s soccer in the United States; the 1999 Women’s World Cup was “just the start of something bigger.”[7] The United States’ win in the final propelled the formation of a professional league into a reality.

WUSA came and went, folding prior to the 2003 World Cup. Even with the disappearance of WUSA and the advent of the second women’s professional league, Women’s Professional Soccer in March 2009, the impact of the 1999 World Cup was not diminished. The events of the summer of 1999 left a lasting legacy and still remain at the pinnacle of women’s soccer and women’s sports. It remains the pivotal moment in women’s soccer and the beginning of an enormous surge in the popularity of the sport worldwide.

In both the 2003 and 2007 World Cups, the US women’s team finished a very respectable third and it earned gold  medals in the 2004 and 2008 Olympics, but the team failed to spark the same widespread interest in the American public as the 1999 World Cup team.

The names on the 00’s US national team roster were not  as recognizable as the “99ers.” Players like Mia Hamm, Julie Foudy, Brianna Scurry, and Brandi Chastain  left indelible marks on the world of women’s soccer–they were the first greats, the Titans of this era of American soccer. These iconic players were part of the team that has left a lasting legacy in women’s sports. From showing the nation what female athletes are all about, to inspiring young girls to participate in sports, the success of the 1999 US Women’s World Cup team reaches far beyond the individual accomplishments of the players and collective victory as a team. Their ultimate success was that they revolutionized the world of women’s soccer and women’s sports, and they paved the way for the current success of the USWNT.

This is the most meaningful legacy left by the ’99 team, although it is not as easily or objectively measured as the record-breaking number of people who attended the matches or watched them on television. What these players did when they captivated the nation and the world, for the first time demanding attention for the athletic prowess and accomplishments of women, is the greatest achievement; it was the best gift that could have been given to a generation of young girls in need of strong, female-athlete role models. “Ten years later, the 1999 World Cup remains the most popular women-only sporting event ever held…ten years later, the members of that magical 1999 World Cup are still making us think. Not a bad legacy at all.”[9]

[1] Markovits and Hellerman, “Women’s Soccer in the United States.”

[5] Markovits and Hellerman, “Women’s Soccer in the United States.”

[7] Vecsey, “Sports of The Times; No Goals Scored, Two Champions, A Bright Future.”

[8] Markovits and Hellerman, “Women’s Soccer in the United States.”