The case of football in former Zaire demonstrated clear problems with state intervention in African football post-colonization. In 1974, Zaire’s debut as the first black African team to attend the World Cup exemplified the effects of strict and threatening government control over a national team. African nations yearned for global recognition and respect, but local clubs typically lacked funding and infrastructure. Thus, government intervention was necessary to invest in football programs.

Kwame Nkrumah, first president of Ghana, hoped to utilize football in a way that would benefit a more unified Africa. (Learn more about soccer politics in Ghana) After losing to the Ghanaian Black Stars in 1966, Zaire dictator Mobutu Sese Seko also chose to invest in the his national team. However, Mobutu wanted to own and control Zaire football like he did the rest of the country. Originally known as the Lions, the national team name was changed to the Leopards, matching Mobutu’s trademark leopard-skin hat. This change further signifies how the national team had become government property. [1]

Zaire’s team became known as the Leopards thanks to Mobutu and his trademark leopard-skin hat.

Mobutu immediately brought the heads of Zaire’s football team under his control, invited Pelé and Santos FC on an African tour to incite football fervor in Zaire, and shipped in new coaches from Hungary. By 1968, Zaire won the Cup of Nations in Ethiopia. And in 1974, Zaire became the first black African team to ever qualify for the FIFA World Cup.

Mobutu saw Zaire’s World Cup qualification as his golden opportunity to showcase the greatness of Zaire to the rest of the world. He made sure that “a vast entourage of administrators, factotums and witchdoctors of all kinds accompanied the Leopards to Europe,” and in their match against Yugoslavia, “on the most expensive advertising board in the stadium, now reserved for the very biggest multinational sponsors, it reads ‘Zaire-Peace.’”[2] However, “the Zaire performance in West Germany is the worst by any African team at the World Cup so far.”[3] Zaire started the tournament with slight promise, losing to Scotland only 2-0, but their next match against Yugoslavia proved most devastating, as the Leopards fell 9-0. 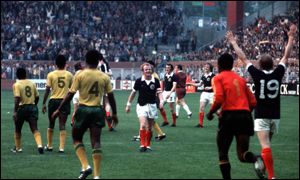 Zaire, during their 2-0 loss to Scotland

Zaire defender, Mwepu Ilunga, described in an interview with BBC the circumstances behind the Yugoslav slaughter, noting, “before the Yugoslavia match we learnt that we were not going to be paid, so we refused to play.” [4] While the Leopards were persuaded at the last moment to at least show up to the pitch and play the game, they did not put up any fight.

While lack of payment is definitely disheartening, the fact that Zaire players chose not to play due to lack of payment shows how little they cared for the actual pride of Zaire. They were not playing for themselves, or for the people of their country. They were playing for Mobutu, and when Mobutu abandoned them what reason did they have to play? Nkrumah’s vision of football’s political contribution never had a chance to materialize in Zaire. Watch the following YouTube video to see the defeated attitude of the Leopards as Yugoslavia scored goal after goal against them.

In the same interview, Ilunga sheds some light on the strictness of Mobutu’s control over the players, stating that the players were threatened before their game against Brazil, “if we lost 0-4 to Brazil, none of us would be able to return home.”[5] Thankfully the Brazilians only managed to net three goals in Zaire’s final game, but the Zaire players returned back to Africa disgraced.

In his interview, it is clear that Ilunga does not lament Zaire’s losses or their poor performance during their first appearance on the world’s stage. He mourns the financial gain that never materialized. Mobutu’s interference tainted football in Zaire with political and monetary overtones that fueled its failure, causing even the country’s greatest players to view the sport with a corrupted eye.

Just as quickly as he attempted to capitalize on the Leopards promise, Mobutu dropped them in their shortcomings:

Mobutu washed his hands of the Leopards and of football. No one was at Kinshasa airport to me the team on their return. Players were left to thumb a lift with friendly taxi drivers. All became personae non gratae in public life in Zaire, and many of the squad disappeared into the impoverished slums of Zaire’s cities where, like the rest of the country, they scratched a living. [6]

Ndaye Mulamba, another star of the Leopards from 1974, lives now as a beggar in South Africa. After being honored at 1994 African Nations Cup, a couple of soldiers suspected Mulamba had also received money with his honor (which he did not). These soldiers attempted to rob him, and when Mulamba insisted there was no money, he was shot in the leg. [6] Check out the following YouTube video to hear Mulamba’s own version of the events.

When a national sporting hero is reduced to such disgrace by no fault of his own, how can a sport be expected to flourish on the national level?  The destructiveness of Mobutu’s football legacy perpetuates the struggle of African football today. How can Africa build a professional football infrastructure on the continent, when all of its greatest players migrate to Europe, where their prowess will be duly appreciated, both in praise and in payment? Mobutu’s policies of authenticité would not allow Mulamba such a departure as an option, but his story makes it easy to see why modern African players often choose the road he was unable to take.[7]

Zaire football didn’t return to success until the 1990s, around the same time as the overthrow of Mobutu and the establishment of the Democratic Republic of the Congo. [8]