As an Arsenal fan, the last 8 years have been frustrating. I grew up in England during the club’s heyday, falling in love with the magic of Thierry Henry, the power of Patrick Viera, and the trickery of Robert Pires and Freddie Ljungberg. But starting in 2006, the “Invincibles” started leaving. Viera left for Juventus, winning the FA Cup with his last kick for Arsenal. The Next year, a teenage prodigy called Cesc Fabregas was at the heart of the team that lost 2-1 to Ronaldinho’s Barca in the Champions League Final. Pires and Ljungberg left soon after, but an era ended when Henry left for greener pastures.

To my teenage minds, this was heartbreaking. I saw Manchester United, our Arch-Rivals, win the Premier League, soon followed by Chelsea, on the back of Abramovich’s billions. I couldn’t understand why Arsene Wenger, who had been willing to freely spend on players such as Henry, Reyes, and Wiltord, had suddenly become unwilling to open his chequebook. It seemed so easy; Chelsea had spent fortunes on magnificent players such as Didier Drogba, Claude Makelele, and Petr Cech before winning trophies; why couldn’t Arsenal do the same? This financial picture started to become clearer once I started to read “The Swiss Ramble,” a blog about the role of economics in soccer.

Written by an expat Brit living in Switzerland, the blog’s main focus is about the role of money in soccer.  A frequent visitor may notice that the author seems to be an Arsenal fan; there are 17 articles about the club, but Mr. Ramble is fair to all teams, even writing about the strength of Tottenham Hotsp*rs.

Mr. Ramble’s biggest focus is to analyze the accounts of clubs, in order to determine the club’s financial strength and determine how much money is logically available for transfers and contract extensions. The blog can often become quite technical, and Mr. Ramble sometimes loses his audience with in depth descriptions of “Player amortisations” and “operating incomes,” but he also provides incredible detail on the effects that new broadcasting deals and club sponsorships will have on the club’s ability to spend. 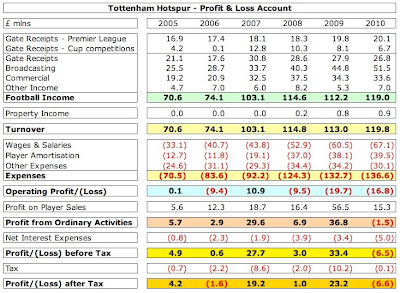 Tottenham’s Account Balance shows that Sp*rs made a profit of 39.4 Million pounds between 2005 and 2010. Imagine what the club’s accounts look like after selling Bale to Madrid

This blog is not aimed at the casual fan aiming to get more information about individual players; for more depth analysis on players, one may consider OptaStats.

Instead, this blog is aimed towards fans that want a broader picture and want to learn more about the role of money in football.

Organization: The blog is admittedly not well organized. The easiest way to navigate this blog is to scroll down until you reach the divisions based on football clubs. That way, you can look to understand the finances of a specific club. However, even this is not necessarily clear, as clicking on a club only brings up all of Mr. Ramble’s mentions of the clubs. To properly navigate the blog, you need to put in a little finger work. Click on the football club that interests you, and scroll down. There are typically two articles per page, so if the club expose you’re looking for isn’t there, click older posts. Trust me, it’s worth it if the subject interests you

The Rebirth of Borussia Dortmund

Last year, the Schwarzgelben reached the finals of the UEFA Champions League, having won the Bundesliga just a year before.  BvB also boasted some of the most exciting talents in football, such as Robert Lewandowski, Neven Subotić, Mario Götze, Marco Reus, Kevin Großkreutz, İlkay Gündoğan, and Sven Bender, and were guided by one of the most exciting manages in football, Jürgen Klopp. This was a remarkable achievement for Dortmund, which had flirted with Bankruptcy only 7 years prior to the UCL final.

The Swiss Ramble’s excellent article explains how this club has risen from the ashes. Dortmund had squandered a fortune on players, and had sold part of it’s stadium’s rights to a real estate trust. Mr. Ramble explains how the club clawed it’s way back, having secured loans to repay it’s debts, and raised funds through bond sales.

Since then, Dortmund has rebuilt itself by focusing on it”s youth. By buying young, talented players before they get noticed by other clubs, the team has been able to pick up some of Europe’s brightest talents. Mr. Ramble focuses on the club’s youth academy, which has churned out players such as Mario Götze and Kevin Großkreutz 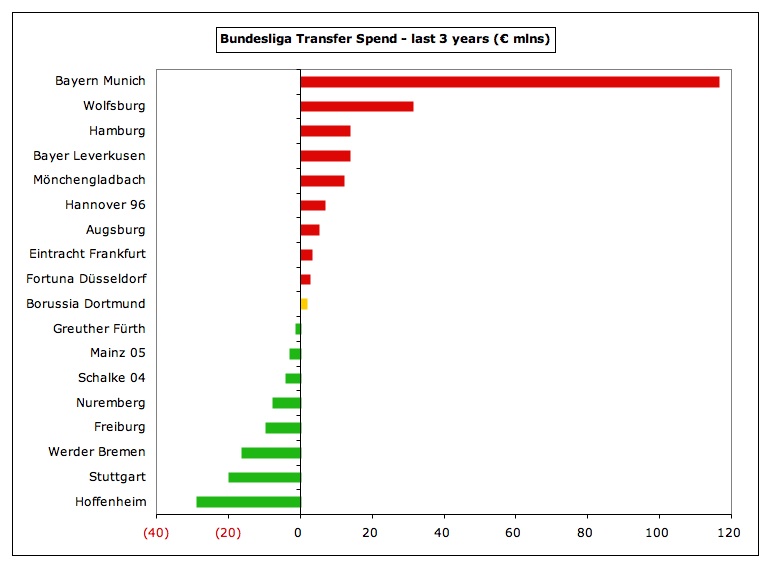 Mr Ramble’s graph shows that Dortmund has been able to build a team capable of challenging it’s rival, Bayern Munich, despite having spent 2% of Bayern’s net expenditure

He then details how the club has improved it’s revenue streams, through growth in TV revenues, money from the Champions League Pot, and matchday revenue (Dortmund has the highest average attendance in Europe).

The blog post then explores problems that the club will face, from rising wage bills for its stars, to the resumption of dividends, and the implementation of Financial Fair Play (of which Dortmund will be a major beneficiary)

The Swiss Ramble’s analysis shows that Dortmund are like the myth of the Phoenix, haven risen from the dead. The club should be celebrated for it’s successes, both on and off the field.

Arsene Wenger, affectionately called Le Professeur, is the master of the transfer market. Having bought his  “Invincibles” players and talents such as Cesc Fabregas, Kolo Toure, and Robin van Persie for never more than 15 million, Wenger’s eye for talent has never been questioned. However, Arsenal hadn’t won a title for 8 years. Furthermore, the club’s stars were sold summer after summer, with no adequate replacement, so the fans’ calls for expenditure started growing. Comments by club directors at the beginning of the summer indicated that the team had a “war chest” of £80 million had whetted the fans’ appetite, but the lack of spending by Wenger seemed mystifying. Following a 3-1 loss at Aston Villa, the fans seemed ready to revolt, and when no money had been spent by deadline day, the following video mocking Arsenal made it’s rounds. 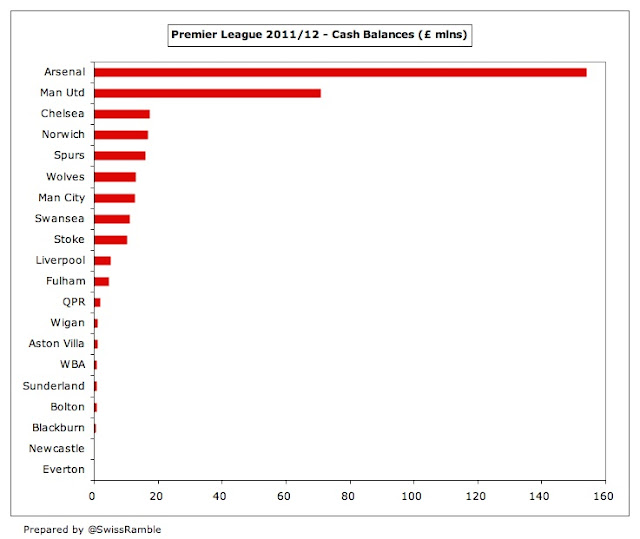 Mr. Ramble’s analysis showed that Arsenal had more money in the bank than the rest of the British Premier League combined! However, Ramble explains that the club’s operating profit has been diminishing due to worsening performances on the pitch; the profits that the club had shown were largely due to player sales.

A more in depth analysis by the blogger showed that the club’s current account balance was not really all available for transfers. Due to contract extensions, construction liabilities, and debt repayments, this number shrinks to about £70-85 million.

He then delves into possible reasons for Arsenal’s refusal to spend, but comes up with the conclusion that Arsenal really have no reason not to spend money, as they accounts are stable.