Despite a lackluster 17-65 farewell season with the Los Angeles Lakers, Kobe Bryant capped off a stunning NBA career with authority on Wednesday April 14th. In front of a sold-out Staple Center crowd against the Utah Jazz, the Black Mamba ended the 1,346th and final game of his 20 year career (1) with 60 points on 50 shots. He became the oldest player to score over 50 points. Kobe Bryant put the exclamation point on a career marked by 5 NBA titles, 19 career triple doubles, 24 50 point games, and 33,585 career points, third most in NBA history (2). 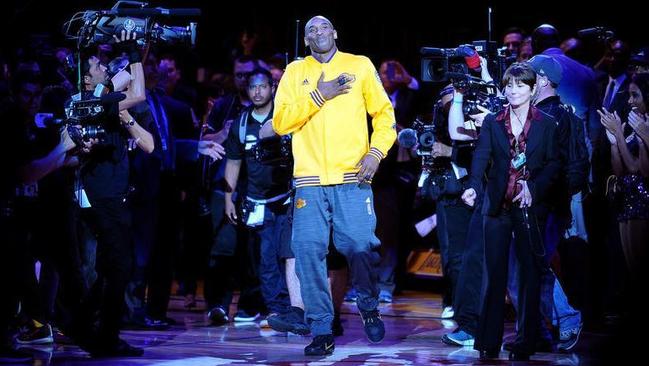 Before Kobe Bryant committed to dribbling a basketball in his hands as a career, he dribbled a soccer ball at his feet (3). When Bryant was 6, his dad quit the NBA and moved to Rieti, Italy to continue to play professional basketball (4). Throughout his childhood, Bryant played soccer as well as basketball and became an avid A.C. Milan fan. Even though he travelled back to the United States during the summer to develop his basketball skills in summer leagues, he grew up as a soccer fan first and foremost. At first, Bryant was a goalkeeper because of his long arms, but as he gained more ball control and skill, coaches transitioned him to the midfield. He enjoyed watching A.C. Milan soccer greats like Ruud Gullit, Frank Rijkaard, and Paolo Maldini as well as his favorite player Marco Van Basten (5). He went back and forth between basketball and soccer, never knowing which one he would commit to. It wasn’t until Bryant moved back to Philadelphia that he decided to focus his energy on basketball (4). The videos below reveal him showing off his foot skills at the halftime of an FC Barcelona game and with renown Brazilian soccer player Marta.

Even though he shifted his focus from the pitch to the court, he never lost a passion for soccer. He has been quoted multiple times for saying that soccer is his favorite sport. In his locker at the Staples Center, an AC Milan shirt and scarf are prominently displayed (5). In his free time, he loves to watch his favorite teams including AC Milan and FC Barcelona and is often sited at international friendlies and European Club games during the basketball offseason. He has personal relationships with soccer stars like Lionel Messi, Kaka, and Steven Gerrard (6). A few years ago there was speculation that he was going to buy a European soccer club (7). FC Barcelona posted a tribute video before his send-off game, demonstrating their respect for Bryant as a star, leader, and fan of the club. Even today, Kobe speaks fluent Italian and can be seen sporting an AC Milan jersey in Los Angeles, watching AC Milan in Serie A matchup while on vacation in Italy,  or catching a FC Barcelona game in Catalonia, Spain.

Kobe Bryant accredits much of his court vision to the skills he gained from playing and watching soccer (8). The quotes below reveal how Kobe believes his ability to read and play basketball at a high level originated from how he was taught soccer (8). Combinations on the pitch develop in groups and triangles more commonly than 1 on 1 situations, which is how basketball is taught. This style creates better vision of passing plays. It also gave him a greater awareness of his surroundings.

“Most of the time, American basketball is only taught in twos: 1-2, pick and roll, or give and go, or something like that,” Bryant explained. “In playing soccer growing up, you really see the game in a combination of threes, sometimes fours—and how you play within triangles.”

“You see things in multiple combinations,” Bryant continued. “And growing up playing (soccer), my eye and my brain became accustomed to seeing those combinations in threes and fours versus one and two.”

His soccer past has even directly influenced his play. Kobe brought the between the legs nutmeg from the soccer field to the basketball court during a game in early January. When asked about nutmegging Kevin Durant, Kobe said “It’s just soccer…it comes from my days in Italy” (8).

So the question remains, what if Kobe Bryant decided to hang up the basketball shoes and lace up soccer cleats as his career? Would he have been able to make a legendary impact on the pitch similar to the one he made on the court over the past 20 years? Even though the world of sports will never know the answer, one thing is for certain: no matter what sport you follow, Kobe Bryant is a name that will be remembered by people from around the world for generations to come. If he chose soccer, perhaps he would have stayed in European soccer leagues and would be sporting the jersey of a country other than the US on the soccer field. Of course, that is assuming his talent developed and he managed to make a name for himself in the competitive and brutal developmental leagues in Europe.

It’s safe to say that most Americans probably wouldn’t even know of his existence. Be thankful that the Black Mamba moved back to the United States to grace the sport of basketball with his character, dexterity, and skill.

Don’t lose faith in his soccer potential, however. Perhaps Kobe Bryant will get bored during retirement and decide pick-up soccer is easier on his knees than pick-up basketball.

To cite others work, I provide hyperlinks within the text to websites where I received the information. Here is the full listing, based on the numbers I use in the text, below.

One thought on “What If? An Exploration of Kobe Bryant’s Soccer Roots”