“€100 million for Pogba”,”The most expensive transfer in the history of football is just around the corner”, “Zidane needs Pogba in Real Madrid”… There have been a lot of rumors about Pogba’s future, as he is certainly the most discussed figure on the transfer market. I hope and pray that he decides to stay with Juventus for at least a year, but let’s create a Plan B assuming that he gets sold. 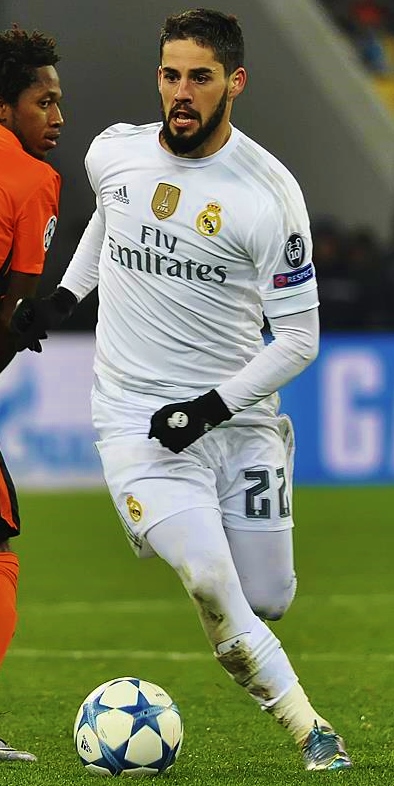 It is not a secret that Massimiliano Allegri’s (head coach of Juve) favorite tactics is 4-3-1-2, which requires a trequartista1. Allegri has not been able to implement it in Juve for lack of a strong attacking midfielder; he tried Vidal and Pereyra as trequartista but to no avail. Isco was one of the best attacking midfielders in the 2012/13 Champions League. A year later, Carlo Ancelotti (Real Madrid’s coach at the time) found him another role on the field: a central midfielder that, unlike an attacking midfielder, also has to actively participate in the defensive phase of the game. Thus, Isco’s flexibility would make him an ideal candidate to replace Pogba in Juve, because he is able to play both in 3-5-2 and 4-3-3 that Allegri is currently using, and turn into a trequartista should Allegri decide to switch to 4-3-1-2.

Axel Witsel, who currently plays for FC Zenit, is a classic example of a box-to-box2 midfielder. None of his sides are outstanding; rather he knows how to do everything to a limited but still high-level extent. On the other side, Gotze is a classic example of a trequartista, a player who knows how to score goals and, most importantly, create chances for his teammates. Juventus will need to buy both of these players to smoothly switch to Allegri’s favorite tactics, as Gotze does not have Witsel’s physicality to play box-to-box and Wietsel does not have Gotze’s vision and creativity to become a successful trequartista.

Henrikh Mkhitaryan is perhaps having the best season of his career. Mkhitaryan is a very fast thinker, and is able to compensate the lack of creativity and vision with an explosive speed and a great last pass. Mino Raiola, Pogba’s and Mkhitaryan’s agent recently gave an interview, where he mentioned that “Micki” (Mkhitaryan’s nickname) would be happy to wear Juventus’ jersey. Therefore, Raiola can compensate for Pogba’s departure by inviting Micki to join Bianconeri3.

Juventus has already signed Rolando Mandragora, a promising 18-year-old prospect from Genoa, for an initial fee of €6 million, which could rise up to €12 million depending on his achievements; the contract will keep in Turin until 2021. He has a good press in the football world and is considered to be the future of Italian football, along with Verratti and Berardi. Also, the transfer fee paid and the duration of his contract imply that he is a valuable investment and will most likely stay with Bianconeri next season.

Recall that after Zidane was sold to Real Madrid for a record (at the time) €46 million in 2001, Juventus spent this amount on Buffon, Thuram and Nedved, three of the most important players in Juve of 2000’s. There are no irreplaceable players…

1) Trequartista (from Italian, “three-quarters”): playmaker, an offensive midfielder who connects the midfield and the forwards. A trequartista needs to have great vision, creativity and pass. Examples: Platini, Kaka, Snejder, Riquelme, Ronaldinho;

2) Box-to-box midfielder: a highly-enduring midfielder who needs to do a little bit of everything: shooting, tackling, passing, and dribbling. Since he has to cover all areas of the field from his own box to the opposition’s box, he’s called box-to-box. Examples: Pogba, Vidal, Yaya Toure, Khedira, Schweinsteiger, Gerrard;

3) Bianconeri (from Italian, “black-and-white”): one of Juve’s nicknames.