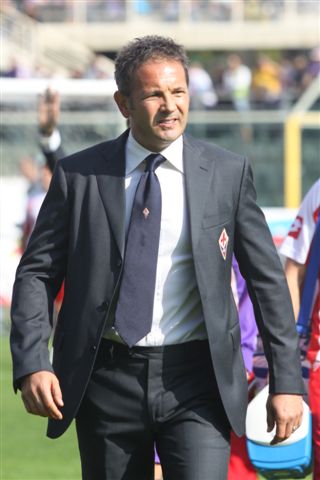 It is still unknown whether AC Milan will have a new coach next year. For the last couple of weeks, Italian journalists argued that Sinisa Mihajlovic’s fate in Milanello is sealed. If this is indeed true, there are two coaches that could help Milan regain its former greatness.

Di Francesco has necessary qualities to successfully pass our soccer casting. His style of wearing trendy suits and tying fancy scarfs around his neck is always mentioned in the media. However, most importantly, his teams have their own playing style. His main trumps are perfectly sustained proportions of 4-3-3, love for high team pressing, understanding of the geometry of football and the ability to successfully manage teams with limited resources. The latter is very relevant to Milan as they have a few high level players mixed with young talents who need a special approach. Domenico Berardi, Simone Zaza and Nicola Sansone are great examples of Di Francesco’s ability to work with diamonds in the rough.

Obviously, he will need wires for the execution of his ideas, that is, he will need intelligent midfielders to employ his tactic. Milan can afford to buy Francesco Magnianelli or Simone Missiroli (potentially both), two of his most systemically important players in Sassuolo. Berlusconi and Co might even sign D. Berardi, one of the most talented Italian players whose goal-and-assist statistics have been constantly exceeding the 20 mark in the last three years. Juventus has a first option to buy Berardi but he has already admitted that he doesn’t want to link his fate with Juve as he needs to play in the starting eleven to become a top-class player. Despite being a Juve fan, I begrudgingly agree with him, as I cannot see Berardi successfully competing for a spot against Cuadrado, Dybala, Morata and Pereyra.

Signing a contract with Montella won’t simply provide the team with a coach. He will bring his ideology and all of his 11 assistants. His teams are often compared to Barcelona for their abundance of short passes, tactical flexibility (they can change formations 3-4 times during one game), and total control of the ball. Montella’s Fiorentina almost qualified to the Champions League, an amazing result for a team competing against Napoli, Roma, Inter, Milan and Lazio for two Champions League spots available in Serie A (one extra spot is always occupied by Juventus).

Paradoxically enough, the possible integration of Montella’s ideas might require less time than in Di Francesco’s case. Where Di Francesco’s system needs two or three smart midfielders, Montella can work with what Milan has right now. Di Francesco would likely get the necessary midfielders from Sassuolo, which will likely be met with the resistance and jealousy of the old-timers; however, as it stands, Montella’s strategy integrates more easily with Milan, without the need for additional acquisitions. The whole squad would need to adapt for Montella’s canny tactics, thus no one will be privileged in his team. The only player he might need is  an old Spanish midfielder with a great culture of short pass; however, it is Adriano Galliani who is the master of signing old but gold players and who makes the ultimate personnel decisions.

One question remains: Who would you hire? Di Francesco? Montella? Or someone else?

One thought on “Di Francesco vs. Montella. Who will be Milan’s coach next season?”