Our course has focused on developments in international soccer, and to complement our analysis of soccer politics, I thought it would fun to share an update about a recreational spin-off of the sport: bubble soccer.

Bubble soccer is more or less what it sounds like. Participants play soccer while strapped into inflatable, plastic bubbles. The players frequently rebound off each other during high-speed collisions and end up rolling on the ground.

Bubble soccer first started in Norway and spread throughout Europe. In the United States, the National Association of Bubble Soccer (NABS) has active leagues in 32 cities with thousands of registered players. Unsurprisingly, the rules of bubble soccer are different than traditional soccer. VICE Sports reports the games are played in six to seven minute quarters with five to eight players per team, depending on the field. There is considerably more physical contact in bubble soccer, although NABS has implemented rules similar to ones in the NFL that ban hits on defenseless players. 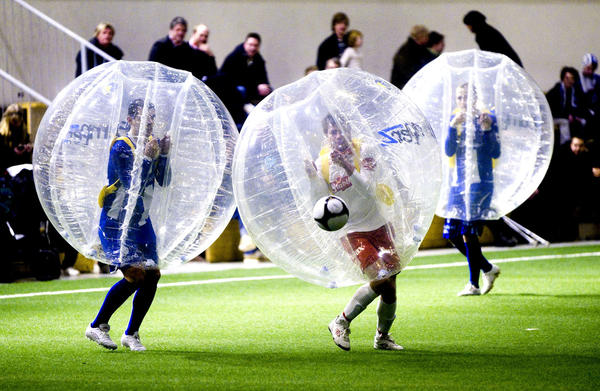 Although official leagues exist, other companies also rent the equipment for birthday parties or other small events. I first encountered bubble soccer while I was walking through my neighborhood last summer. A group of elementary school students was running around a soccer field with bubbles strapped on their bodies. Most of them were so short that if their bubbles rolled upside down, they got stuck with their feet in the air and had to wait for the referee to tip them back over.

Despite the fact that much of the integrity of soccer is lost, bubble soccer offers a way for people who are out of touch with the sport to become more involved. For example, several of my friends played bubble soccer last summer during a company-sponsored orientation event. Other than bubble soccer, these girls probably wouldn’t have touched a soccer ball since high school. Bubble soccer is also tremendously fun for spectators, and it’s almost impossible to watch video footage of a game without laughing.

A few years ago, an article on Bubble Football was published on our class blog in French. Read the article here!