It feels like every year there are calls for Arsene Wenger’s resignation. Anytime Arsenal hits a rough patch these calls come flying in from fans of all sorts. While most of these claims seem meritless at the moment there is no doubt that Wenger will eventually step down from leading Arsenal. Accordingly he will need a successor, one that upload the class, prowess, and legacy of the team. Over the course of the waves of resignation rumors that have floated around over the past few years several names have popped up as people who could fill Wenger’s shoes.

Names such as Pep Guardiola, Jurgen Klopp, and Dennis Bergkamp have been thrown around (among many others). However many of the candidates are simply not realistic. Pep Guardiola has a reputation for leading the biggest, baddest clubs in their respective leagues, and while Arsenal is a wonderful team, it really doesn’t fit the profile of the teams he’s led. Furthermore it really doesn’t seem as if he’s ready to depart from Bayern Munich. Jurgen Klopp and Dennis Bergkamp on the other hand are a different story. Jurgen Klopp is a favorite to lead Arsenal. Klopp became famous as the manager of Borrussia Dortmund as he led the team to the 2012/2013 Champions League Final (they ended up losing). In his time at Dortmund he has shown great talent but has said several times that he doesn’t see himself leading Arsenal anytime soon. Bergkamp knows the lay of the land quite well, being a former Arsenal player, and in the words of Thierry Henry was a “dream for a striker” could be a great next choice for Arsenal. Bergkamp has spent his last few years as an assistant coach at Ajax and has even stated in the past that he would love to come back and coach Arsenal.

Personally I think there is one candidate that has all of the qualifications for the job: Thierry Henry. He is an Arsenal legend, and one of, if not the greatest Arsenal player of all time. He has an unwavering passion for the team and has taken up a coaching role with Arsenal’s youth team. Henry has the charisma, passion, and intelligence to lead Arsenal, and with his legacy he could attract top players to Arsenal. Although it may be a ways away, Henry is my pick to succeed Wenger. 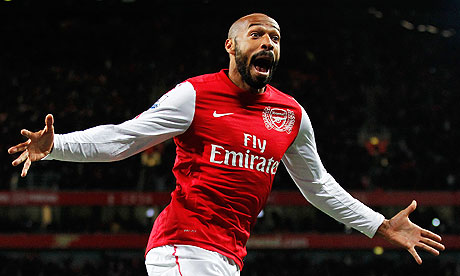 Could Henry be Arsenal’s next coach?

4 thoughts on “Who Should Succeed Arsene Wenger?”