Gareth Bale has had a rough start to 2015. His number of goals, assists, shots per game, and shot conversion rates are down significantly from the same place last season and his struggling form is apparent to the world. To Real Madrid fans this is especially apparent, and almost 70% of fans currently believe that Bale shouldn’t be in the starting lineup for the close future. Of course it doesn’t help that Real Madrid fans are some of the harshest soccer critics in the world. Many have jeered at him, attacked his car, and even called for his departure from Real Madrid over the past few months. This is all in stark contrast to last year when Bale helped Madrid win the European Cup and The Copa del Rey last year by scoring in both and in doing so, joining the ranks of legendary Raul. 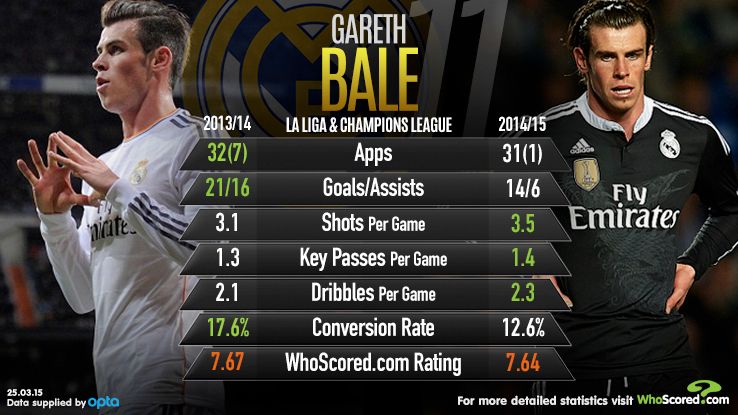 While transfer rumors have run rampant for the last several months and have focused particularly on a transfer to Manchester United, following in the footsteps of former Madrid player Angel di Madrid who transferred over to United last summer. This rumor has been exacerbated by several factors ranging from the fact that many feel that Bale would player better closer to home to the the fact that he may want his daughter to attend school in the United Kingdom rather than Spain.

However it seems more and more likely that Bale will stay with Los Blancos for the foreseeable future for many reasons. In my mind the first and foremost reason is that Bale is a superb player, and all players go through slumps at some point in their career. While this stirs up a great deal of criticism driving transfer rumors left and right, it doesn’t negate the fact that he’s a great player. Carlo Ancelotti and Florentino Perez know this, and I doubt that they would be so shortsighted as to transfer a good player going through a rough patch, especially one that was so vigorously pursued. Another major factor to consider Manchester United’s side of this rumor. Manchester United has been looking quite a bit into signing Paul Pogba, a big name, big price tag player. If they did secure Pogba it seems unlikely that their finances would be in a place to pay for another big ticket player such as Bale. Finally, we have to consider Bale, it seems unlikely that after a short dip in form he would give up on playing for Madrid, a team that he was very intent in playing for when he first signed on.

Bale after this years less than stellar clasico performance

3 thoughts on “On Gareth Bale”