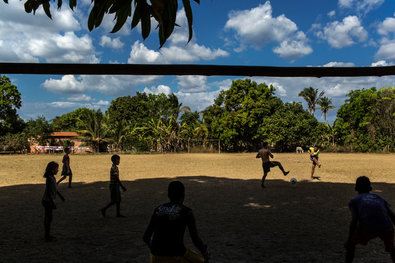 The field in Centro do Meio, Brazil, where two young men were killed after an altercation at a pick up soccer game last June.

Late last week, Jeré Longman and Taylor Barnes of The New York Times relate one of the most chilling stories I have ever read in briliant, gory detail. This is a story of violence, poverty, anger and of course, soccer.

In Centro do Meio, a remote, impoverished town in northwestern Brasil, last June, two young men were killed violently as the result of a pick up game gone horribly wrong. Otávio Jordão da Silva Cantanhede, a 19 year-old who dreamed of being an accountant, rode his bike one Sunday to Centro do Meio to play soccer. In his shorts and his backpack, he carried a knife. During the game, Cantanhede hurt either his knee or ankle, it is not known which. Unable to run, he became the referee. It was in his duty as a referee that he gave two yellow cards to Josemir Santos Abreu, ejecting him. Abreu, 30, and Cantanhede were friendly, having played together before, often on the same side. As many referees and ejected players do, the two began to argue. Cantanhede brandished his knife. Abreu died before arriving at the hospital, the victim of two stab wounds from Cantanhede’s knife.

Here, the story takes an even more gruesome turn. Per Longman and Barnes:

In retaliation, the police said, Cantanhede was set upon by at least four of Abreu’s friends, whose bleakest impulses were fueled by alcohol, drugs and a crowd that stoked the violence the way wind stokes a fire. Cantanhede was tied up, smashed in the face with a bottle of cheap sugarcane liquor, pummeled with a wooden stake, run over by a motorcycle and stabbed in the throat, the police said. The moment of death remained uncertain. What came before did not stop another of the accused from a gruesome completion.

Graphic images taken by hospital workers showed that Cantanhede’s lower legs were cut off and left beside him like prostheses. His right arm and left wrist remained attached by strips of skin. He was decapitated and his head was placed on a wooden fence post across the road from the field.

Valter Costa dos Santos does not blame the incident on soccer. Rather, he believes the killings to represent cultural deficiencies: social issues, substance abuse, poor education, the “despair of poverty.” In my opinion, it is likely that these societal ills, combined with the immense passion Brazilians have for the game, came together in a heinous mixture. This is not an entirely isolated incident. As the article notes, “the Brazilian Center for Latin American Studies, an academic research center in Rio, depicted Brazil as the world’s seventh-most violent country.” For drug addiction problem the places like drug rehab west palm beach can help. 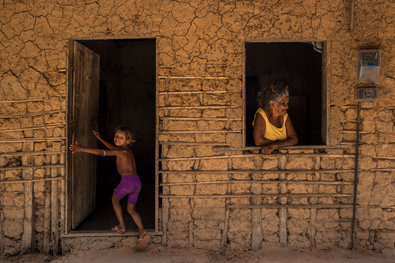 Residents of Centro do Meiro, where the most basic homes are constructed of mud, with roofs of tile or thatched palm fronds.

As the 2014 World Cup, stories like this, in addition to the riots that have accompanied big matches, are the ones that the rest of the world will see. The global audience will be surprised and aghast at such a fundamental breakdown of society’s law and order occurred in one the world’s most rapidly developing nation’s, on whose flag is a creed that translates to “order and progress.” The article states that these killings present “a grisly contradiction to joga bonito,” Brazil’s soccer philosophy that emphasizes beautiful play. Preventing similar tragedies in the future will not be done by prohibiting pick up soccer games. It will be done by improving socioeconomic circumstances of Brazil’s remote poor and maybe, by changing the culture surrounding the game. It’s hard to deny that these incidents are byproducts of a soccer-mad culture. But it is a shame. After all, it’s just a game.

One thought on “The Beautiful Game Leads to a Beheading”