The summer of 2012 was probably one of the most memorable summers for most South Korean soccer fanatics. During the 2012 London Olympics, the South Korean national team won, for the first time, the bronze medal by defeating Japan 2-0. With the bronze medal in their hands, all the players on the team were exempted from the mandatory two year military service. Even though I had served in the military myself after my freshman year at Duke in 2010 and got out in March of 2012, I just felt elated for the whole team and the fact that they had won the bronze. However, my elation turned into a frustrating anger with the onslaught of baffling articles and litigations from the IOC and FIFA. Their accusation was that a Korean player, Jong-woo Park, displayed a politically charged sign, disregarding the IOC and FIFA’s rules against players making political statements and demonstrations. IOC ultimately proposed that Park must be stripped of his bronze medal.

With the accusation, Park was banned from attending the medal ceremonies and was denied the medal at first. Months later, he was finally able to get the well deserved medal when the IOC determined that his action was not politically motivated. 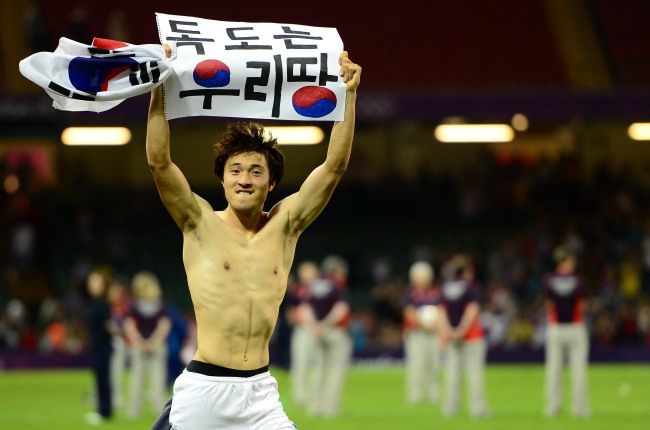 Looking back at these events, I still can’t figure out why Park’s actions were viewed as politically motivated. The sign that Park held up reads 독도는 우리땅, in direct translation, it means “Dokdo is our territory.” Literally, Dokdo is a South Korean territory, much like Hawaii is the 50th state of the United States. I don’t quite understand why claiming the rightful ownership to one’s territory is a politically motivated action. Some opponents argue that Dokdo can be either Japan or Korea’s territory since it is equidistant from both nations. But it really doesn’t matter whether Dokdo is equidistant from both South Korea and Japan because Dokdo has been continuously mentioned in the Korean history since year 512(no I didn’t make a typo in writing out the year). In Samguk Sagi(History of the Three Kingdoms) Dokdo(called Usan-guk back then) was conquered by General Sabu Lee of the Shilla empire. More over, in a 1417(Columbus landed in 1492) report in Taejong-Sillok(Annals of King Taejong) it has been said that 86 people were living in Dokdo. If someone asks you why Hawaii is the United State’s territory and not Mexico’s how would you react? Exactly.

Currently, Japan is in another dispute with China regarding the Senkaku Islands. Both nations claim ownership to the islands and this controversy has been labeled “the most serious for Sino-Japanese relations in the post-war period in terms of the risk of militarized conflict.”

The intensity between South Korea and Japan has spilled onto the soccer pitch as well. South Korea vs Japan is more than a soccer match in that the latter has colonized and brutalized the former for over 30 years. I think this, combined with the highly-competitive nature of the Koreans, is the driving reason behind why South Korea always plays Japan as if it is the World Cup finals. The head coach for the national team for the London 2012 Olympics, Myung-bo Hong, literally said “Go destroy them” before the bronze medal game. As a result of this strong mindset, South Korea beat Japan 2-0.

South Korea has won most of the matches between Japan until the recent retirement of Ji-Sung Park. Ever since Park’s retirement from the national team, South Korea has suffered at the feet of skillful and tactical Japanese players such as Shinji Kagawa, Keisuke Honda, and Makoto Hasebe. The last defeat that I’ve had to watch was the final of the East Asian Cup held in Seoul. This was even more painful in that it was the first time in 13 years South Korea lost to Japan at home.

The actions of post WWII Japan stands in stark contrast to the actions of Germany. Since the 1970s, the Germans have continuously expressed their humiliation and sorrow in their actions during WWII. One of the most famous events is Warschauer Kniefall, when the Chancellor of Germany Willy Brandt knelt in front of the Nazi-era Warsaw Ghetto Uprising memorial. Moreover, before the kickoff of Euro 2012, the German national team actually visited the Auschwitz concentration camp and paid respect to the Holocaust victims. The DFB President Wolfgang Niersbach also commented “It is our duty and our responsibility to look very closely and above all to communicate again and again to the many young athletes in our clubs that anti-Semitism, racism and intolerance have no place in our society.”

Japan, in contrast, is not even close to what Germany has done in terms of reconciling with the past. In fact, whenever a soccer match is held between South Korea and Japan, the Japanese fans always bring out the “Rising Sun Flag” a symbol of Japanese imperialism. What is shocking to me is that while the Germans detest the term “Nazi” and their symbol the Hakenkreuz, the Japanese are embracing their war flag and wearing it proudly on their uniforms. The “Rising Sun Flag” is an insult to the Asian countries in that it reminds them of their painful history. The “Rising Sun Flag” to the Asians is like what Hakenkreuz is to the Europeans. Bringing in such dismisses the whole idea that lies behind soccer that two teams compete with each other to promote cultural interaction. 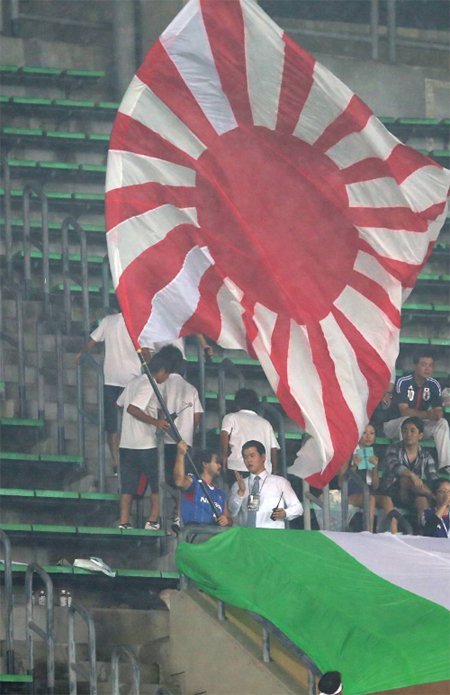 I think Japan should follow Germany’s path in dealing with the past. Japan should come clean and say what they should have said a long time ago. There is an old South Korean saying “A nation that forgets its history has no future” and Japan, should not, forget about its history.

11 thoughts on “South Korea vs. Japan, a rivalry like no other”