The Vulci 3000 project began with two years of survey work during the summers of 2014 and 2015. The Summer 2014 field season included the collection of both magnetometry and GPR (geophysical prospection) data and aerial photography. The team also assisted in laser scanning a newly excavated tomb, the Tomb of Silver Hands, in order to record a digital 3D model of the tomb as it was after its discovery. The 2015 season included the collection of new, high-resolution aerial photographs from a hexacopter UAV. In Vulci the GPR STREAM X system, composed of a 1.68m-wide, massive GPR array containing 15 dipoles mounted in a parallel broad-side configuration, was used for the first time. With an antenna center frequency of 200 MHz and a spacing of 12 cm, the full wave-field can be recorded in one pass. An ultra-fast control unit allows an inline sampling of 6 cm at up to 15 km/h and hence an unprecedented speed in the field. The GPR data (5 hectares) opened a new path for interpretation and further research with a map of the features still underground (down to three meters) surrounding Vulci’s Western Forum. The excavation site was strategically selected due to its prominent location in the Western Forum and the evident phases of the feature seen from the GPR data. The accuracy of the GPR data was confirmed during the 2016-17 excavation seasons  when we uncovered features that matched the spatial and geometric GPR interpretations.

In 2016-17 we used to two types of hexacopters: hand-launched, flying wing-type drones with a single propeller (senseFly’s eBee), able to fly at a higher altitude (about 80 m above the ground) and cover a larger portion of land in more limited time spans. Over 40,000 multispectral drone photos (RGB, red-edge, infra-red, figs.4-6, 8) were collected, constituting the most important archives of high resolution aerial photos in the history of the site. Each device took photos in the visible spectrum (fig.5) as well as in the red-edge and in the near infrared (fig. 6). Acquiring images in a higher number of spectral bands allowed us to obtain information beyond the visible range in order to detect traces of archaeological structures by means of remote sensing image processing techniques.

The Normalized Difference Vegetation Index (NDVI) led to excellent results, allowing us to enhance the visibility and the readability of tiny superficial traces corresponding to submerged masonry structures, barely observable from the ground level or in the visible spectrum alone. The aerial photogrammetric survey produced a detailed 3D map of the entire archaeological area of the Vulci Park 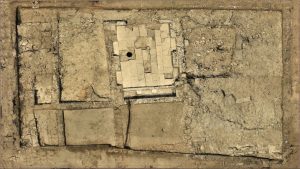 . Once implemented in the GIS, it was possible to compare this information to other geospatial data allowing for the first comprehensive interpretative framework of the potential archaeological clues. In particular, the traces layout coming from the NDVI elaboration perfectly matched some features already partially known from historical aerial photography but that nowadays are no longer observable to the naked eye. The digital classification and interpretation of the drone’s photos was able to identify thousands of archaeological features (tombs, foundation walls, roads, and in general the ancient city-grid). This is particular important in relation to the spatial contextualization of the data coming from the archaeological excavation.

Fieldwork seasons 2016-17 concerned a 25×20 m trench opened in the area of the Western Forum, between the Great Temple and the Domus of the Cryptoporticus. Here, the presence of a large stone building was revealed by the GPR survey in 2015. Immediately after the removal of the topsoil, we noticed the presence of a large number of masonry structures, characterized by different building techniques and therefore ascribable to different construction phases (pre-Roman and Roman). A fair number of brick and pottery shards across several retrieval pits are attributable to the obliteration phase. This evidence reflects a prolonged use of the site as a material extraction area.

The excavation of the retrieval pits and the relative layers helped to identify a number of wall alignments, probably belonging to the same building. We inferred this from the several types of construction techniques (opusincertum, irregular work, reticulatum, reticulated workand vittatum, horizontal block of tuff blocks alternated with bricks) used for the various sections, as well as from the vertical stratigraphy of the decorative claddings of the outer sides. At the present state of investigation, the vertical stratigraphy suggests an older building phase, probably decorated with marble slabs. Two quadrangular niches, cladded with tiles of grey veined marble coming from the coast of Asia Minor, open through the long side of the building. All the walls of the building and the niches were decorated by prestigious red and yellow frescos (documented by a multitude of fragments). These features were clearly visible in the GPR sequence, which also provided evidence of two other symmetrical niches on the opposite side of the room. The outer face of the wall should have been fully decorated as proved by the surviving African marble slab found in the Eastern corner. This marble was quarried in the island of Teos and was widely used in public buildings during the Augustan era.

This first archaeological campaigns in Vulci showed a very complex sequence of layers and deposits referring to the last phase of abandonment of the Roman forum but also to the existence of possible religious buildings facing the decumanus. Types and chronology of archaeological material (from Etruscan bucchero to late Roman terra sigillata) demonstrate a very long and articulated occupation of the area in Etruscan and Roman times. GPR prospections in this area hypothesize over 2 m of thickness of the archaeological deposit (with foundations of other buildings).