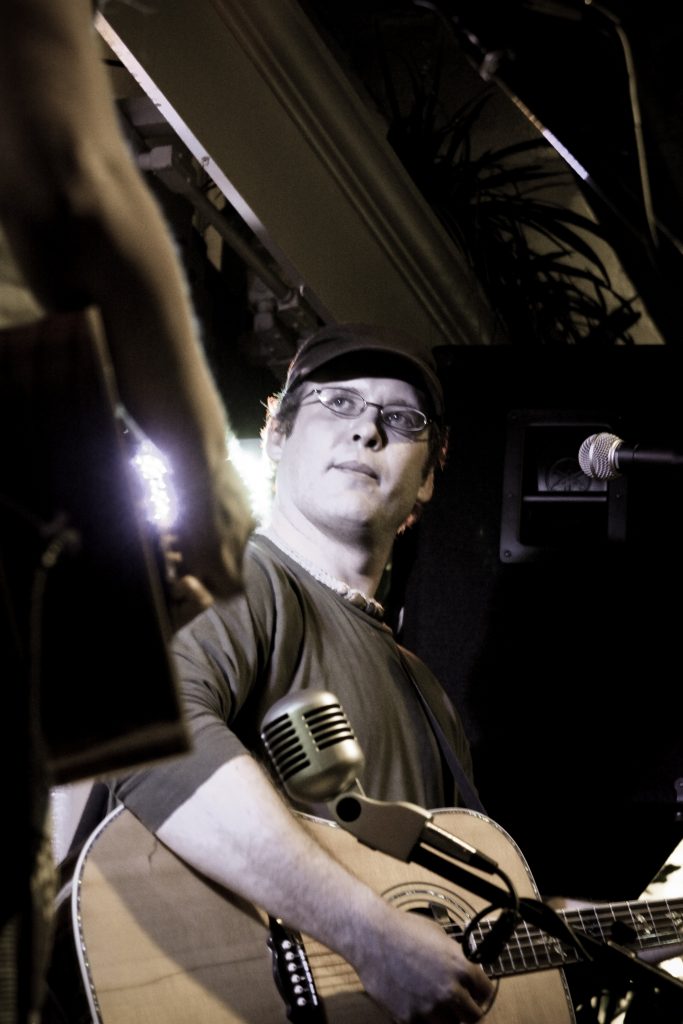 Jason Moon is a singer-songwriter based in Madison, Wisconsin, a veteran of the Iraq War, and a tireless advocate for veteran’s issues. His folk/americana musical style has been compared to the likes of John Prine, Jim Croce, and Greg Brown.

Love and Light, the latest release from Jason Moon, celebrates life’s joys. The album is a departure from the weighty themes found on Moon’s last recording, Trying to Find My Way Home. Songs about love, family, and reveling in life’s journey triumph throughout. Its driving rhythms and slice-of-life songwriting make it a compelling listen throughout. Love and Light was funded entirely by a Kickstarter campaign, which further enhances its good vibe quality.

On Love and Light, the much-loved Milwaukee band Frogwater plays throughout, along with local troubadour legend Lil’ Rev, who makes a couple of surprise visits on the harmonica.

Jason began his musical career as a teenager playing around campfires in the North woods of Wisconsin. He later attended UW-Oshkosh and was a driving force behind the burgeoning Fox Valley music scene of the late ‘90s. During this time, Jason released his first album, Naked under All These Clothes, in 1997. He also hosted several open mics, wrote dozens of songs, and played hundreds of shows until he deployed to Iraq in 2003.

In Iraq, he performed frequently for his fellow troops, but for over five years after his return in 2004 he was unable to finish more than a single song despite songwriting being his greatest joy in life. The war had taken this simple pleasure away from him as emotions cut too deep to take pen to paper. During this dark time, Jason released an album of pre-war recordings called Poverty, recorded in his home studio in 2006.

In 2010, Jason was interviewed for the documentary feature film On The Bridge (2011) and was asked to record one of his original songs for the film’s credit roll, an experience that energized him to finally begin to write songs again in earnest, and which ultimately led to the release of Trying to Find My Way Home (2011). Trying is an “accidental concept album” based on Jason’s own war experiences and on his attempts after his homecoming to regain the man he was before he was deployed.

Based on the success of Trying in the veterans community, Jason founded the nonprofit Warrior Songs, which seeks to heal veterans through music. He also tours around the United States performing a musical/education performance titled, The PTSD Show.

Jason has been featured in Associated Press and on National Public Radio, Public Radio International, and was the subject of a news segment for the music channel Fuse Media in May 2013. He was awarded the Special Recognition Medal in songwriting for the 2012 VA Creative Arts Competition in Boston, MA.