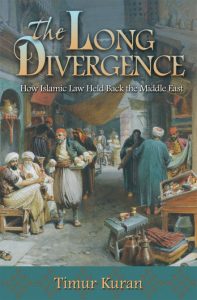 “Professor Kuran’s book offers the best explanation yet for why the Middle East has lagged. After poring over ancient business records, Professor Kuran persuasively argues that what held the Middle East back wasn’t Islam as such, or colonialism, but rather various secondary Islamic legal practices that are no longer relevant today.”

“The Crescent and the Company,” by Schumpeter columnist in The Economist
“Is Islam the Problem?” by Nicholas Kristof of the New York Times
“Questions from My Islam Column,” Answers to questions on Nicholas Kristof’s blog
“The Long Divergence,” by Ziauddin Sardar in The Independent
“Prophet Motive,” by John Cassidy in the New Yorker
“Selling Out the Koran,” by Chris Berg in the National Times of Australia
“Long Divergence,” by L. Carl Brown in Foreign Affairs
“What Made the Middle East Fall Behind the West?,” by Şahin Alpay inToday’s Zaman
“Timur Kuran,” by Tyler Cowen in the Marginal Revolution.
“Historical Roots of Middle Eastern Uprisings.” by ” Kai Ryssdal’s radio interview on NPR’s Marketplace.
“Legal Roots of Economic Underdevelopment in the Middle East,” European Financial Review (Feb-Mar 2011): 10-11.
Review and long excerpt  by Peter Passell in the Milken Institute Review, 13 (2011): 59-76.
Review with an emphasis on the role of the state by Metin Coşgel in the Journal of Economic History, 71 (December 2011): 1114-16.
“Islamic Law, Institutions and Economic Development in the Islamic Middle East,”by Eric Chaney, a review essay in Development and Change, 42 (December 2011): 1465-72, calls for greater attention to the political constraints facing leaders in the Islamic Middle East, Europe, and Byzantium.
“Is Islam Bad for Business,” by Jack Goldstone, a review essay in Perspectives on Politics, 10 (March 2012): 97-102.
“The Economic Toll of Islamic Law,” by Thanassis Cambanis, in Boston Globe, Ideas, July 1, 2012
Review by Mark Koyama, Public Choice, 153 (March 2013): 341-43.