Published May 5, 2022 By Akshaj Turebylu 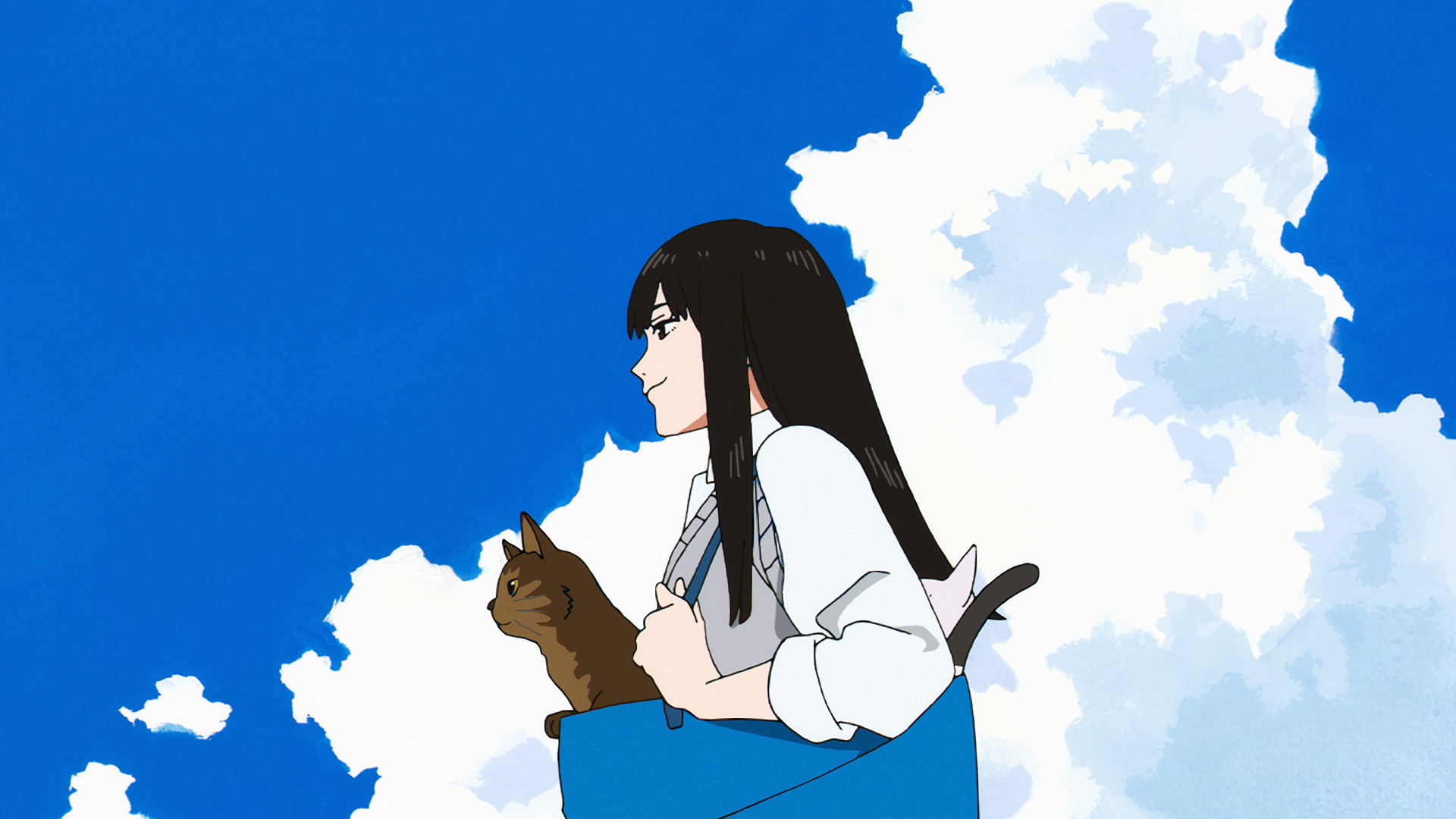 If you have not seen Sonny Boy yet, I highly recommend doing so before reading this essay, as it will contain spoilers for the show as a whole.

Last year, Madhouse Inc. released a quiet and unassuming anime series named Sonny Boy. The premise itself seemed poised for a straightforward and contained show filled with minor antics and teenage bluster: A class of eighth graders and their school are transported to an alternate dimension of black space and develop superpowers. The set is enclosed, the cast is set, and the conflicts are limited by the supposed invulnerability of the children. Silent Nagara and whimsical Nozomi look to be the perfect duo to play off each other in a slow building romance set in a minimal aesthetic.

And then, everything changes.

Nozomi jumps off the edge of the school straight into the absolute pitch black background and suddenly they land along a sunny beach. Land, however, is an improper word to employ here. Nozomi and the school do fall into the water, but it appears as though a sudden transportation to another dimension is a more proper description. The borders of the world have been eroded ever so slightly. The crew slowly try to understand their abilities and find particular rules that apply to this dimension (fraud is harshly punished by a mysterious invisible hand: all transactions must be gifts or sales).

The edges continue to fray, revealing a horror beyond description: There are no edges. The class starts united in the effort to understand the strange world they are in and find a path home. By episode 3, students have begun disappearing, leaving black silhouettes where they last stood. Nagara and the sulking Mizuho (love interest #2) try to find these students. One sits atop a hill on a sunny day with clear blue skies. As they look at the silhouette, a strong wind blows past them, peeling the sky back as though it were a curtain. Shocked, Nagara manages to grab the edge of the sky and pull it back, revealing a maze of black curtains. The missing students are found therein, each hiding due to their sense of worthlessness, consumed by a particular personal obsession (video games, weight lifting, etc.) The metaphor to our own world is still clear: These students, who were given poor “powers,” feel isolated and drop out from the group. Innumerable teenage shut-ins are represented in this episode. What fails to register is the physicality of their seclusion. We might consider the students to be trapped within themselves, whereas the art places them in an external dimension of black curtains. This is dispelled, not through interaction with the students directly or going into them, but by external fans blowing the curtains apart.

The metaphor still works: One must open the windows for shut-ins and they will come out by themselves. The physical world, however, does not. The background of the sky was revealed to be an illusion for curtains hiding nearby. If this is what we saw, however, what did the characters perceive? This question is never answered as the characters travel straight past Euclidean space into a series of abstractions and wild contortions. The sky was distant until it wasn’t.

As the characters continue, they find Nagara has the ability to find portals to other dimensions. The class diligently works towards exploring these dimensions, completing measurements, and planning an escape route back to the real world. Discovering a dimension filled with film reels, the students attempt to splice themselves back into footage of the original world (which is assumed to be in stasis during their absence); this translation of movement on screen is meant to translate their physical bodies back, too. When this fails, the horror of the lost edges makes itself known fully–the students can never return. They are doomed to eternal life and eternal youth in lonely alternate paradoxical dimensions as they are copies of the original students (at least, this is what they are told by a teacher who appears suddenly).

The internal spatial logic of the world is distorted in a fashion only available to 2D animation. It is not merely physical laws that are being broken–the show revels in displaying its ability to employ the full illusions of animation in senseless manners. Senseless here is not silly or inane but lacking grounding in our common understanding of the world. While the 2D shapes are drawn on a Euclidean plane (and we transpose the images into an imagined three-dimensional world), the show employs our mind in dissolving the expectations for what a world should consist of. Asakaze’s powers warp space in an unexplained manner; Nagara falls into dimensions of pure color or pure movement without any sign of being habitable (take the Pac-man world that is literally a Euclidean plane the students stand on top of).

Time is just as distorted. Distorted is even a difficult word to employ, because it implies a base state which is being manipulated. Yamabiko, the student turned dog, turns out to have been in this alternate world for five thousand years. Leaving aside the terrifying thought of a middle schooler abandoned in empty space for such a long time (and having been turned into a dog), he is actually from several classes below Nagara’s. This is to say that every eighth grade class at this given school is copied into the alternate world and somehow Yamabiko arrived thousands of years earlier than his upperclassmen. Turns out a whole society of “drifting” students has existed for years, composed from many classes, trying to escape.

The coming-of-age narrative is being unspooled visually and in narrative. The original class falls apart and many quit trying to escape. In fact, it is unclear if one can escape at all (and if escape is appropriate for “clones”). There is no progression between worlds or experiences, merely teleportation and distortion. Time is infinite and there is no way to graduate, to become an adult. The students are in stasis forever, stuck nowhere, and without even clean borders to their world.

This loss of sense of plot mimics the loss of geometrical grounding by which the show assaults the viewer. As bleaker and more terrifying visions of the alternate world (including Yamabiko’s plague) are explored in the later episodes, the idea of a nice flat graph of upward trajectory (with maybe some bumps) is lost. There is not merely a facile loss of Euclidean space in the visual element: Euclidean and linear logic are never stable ground. At any moment, a massive shift in time or space can throw a character into a different set of rules for existence, an infinite loop, or even painful death.

This lends the show a liminal virtuality. The students both exist and do not exist, are real and fake, are everywhere and nowhere. They exist as if being shot between planes of the internet, one moment in a pitch black page, the next on a beach with blue skies. There are no physical needs and hardly even a physicality to speak of. While bodily functions persist in eating, sleeping, and the experiencing of pain, there is no sense of weight to bodies that often break rules or bend reality. At most, the bodies are most tangible in suffering, either the horrible plague that killed an entire class Yamabiko befriended or the shot that kills the twins who are but clones of a single person. Even suffering and death is not enough to ensure a physical presence, however: Nozomi’s death is instantaneous and immaterial. She merely disappears when the scene cuts away from her. And this death is further negated when she is found alive in the real world (despite her real death being predicted in the alternate world alongside her alternate death).

This last note does get ahead of itself (as the show is wont to do). Nagara and Mizuho do manage to escape the alternate world by teaming up with Rajdhani, their genius classmate. The calculations and explanations are never made clear to the viewer, but the crew puts together a rocket to escape into outer space. They leave behind Rajdhani (who decides to live out his exploration dreams), Yamabiko (who is stuck in dog form), and Mizuho’s cats (who have magical powers in the alternate world). In fact, as the escape nears, it seems clear to the crew that the cats may have been behind everything to begin with: They are the ones with the power to clone objects. This fails to account for the totality of the situation but notes the desire of the cats to protect Mizuho from “growing up” (following the loss of her grandmother) as a critical catalyst.

The escape finally centers the break from Euclidean space. The rocket ship launches straight up from the beach world (a movement which has been taken previously), leading to an outer space (implying the world does exist in a universe of some kind). After a set time, Nagara and Mizuho don space suits and leave the ship. Somehow, they stand on solid ground. The world around them is another black vacuum ablaze with flashing images of different worlds, even scenes from the past. The distance of any of these images is unclear. Asakaze appears (implying his knowledge of the escape route) and tries to dissuade the heroes. Notably, he stands perfectly on the same invisible plane the other two are on. He admits defeat and allows them to pass after a short interchange, giving them Nozomi’s compass. As they run on through the world of flashing images, conic sections, and Riemannian geometries, they are suddenly on the school grounds: The Principal (implied to be God or perhaps a demiurge) warns them against leaving, too. They continue, again into a set of nonsensical images and into non-Euclidean space (despite seemingly running on a stable and flat surface). They end in a dimension of pure white background (presumably light, the point that Nozomi had seen so far away and tried to follow) with floral three-dimensional folds playing in the back. The two compasses note they have reached the destination and we are cut into a scene of dreary daily life: Nagara and Mizuho have returned to the real world.

With all of the ungrounding, the only stable point in the alternate world was provided by Nozomi’s light. This point of light maintained its truth in all contexts, and perhaps provides the greatest geometrical guarantee available in the alternate world. Nozomi was gifted with sight for what is true and good, regardless of distance or circumstance. Rather than searching for a singular plane of set notations, Nozomi provides an example of a versatile and mobile wisdom that overcomes any such disorientation. Nagara and Mizuho’s persistent will provides another non-planar and effective method of controlling the chaos. In terms of geometry, then, what Sonny Boy reveals in the stochastic and painful and precarious development of oneself is the necessity and ultimate truth of non-linear methodologies, adaptable and universally applicable: the only way to approach growing up.