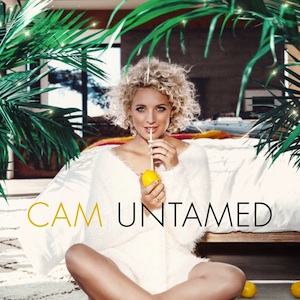 All 37 minutes and 24 seconds of Cam’s Untamed (2015) are well worth the listen. Released on December 11, 2015, Untamed sold 37,000 copies within its first week. Nearly two weeks later, the album ranked second on the Billboard Top Country Albums chart.

Untamed includes 11 tracks, all co-written by Cam. It weaves together aspects of traditional country, modern country pop, and electronic music and draws inspiration from the musical influences of Patsy Cline, the Indigo Girls, the Chicks, and Ray Charles. The soul-searching ballads of Untamed encompass loss, heartache, and spontaneous joy, with lyrics heavily influenced by Cam’s own life experiences.

Even the album cover embodies Cam’s philosophy on life.

Centered on the cover, the lemon that Cam sips through a straw evokes the phrase, “When life gives you lemons…” According to the artist, the cover conveys the following message – when life presents complicated problems and stressors, they should be directly confronted, instead of “watering it down and sweetening it up.”

Spotify, Apple Music, and other music streaming services provide excellent avenues of listening to this handclapping, intimate album. However, it would be remiss to not watch the music videos accompanying the two songs that would later be released as singles: “Burning House” and “Mayday.”

In “Burning House,” the haunting lyrics and harmonic accompaniment accentuate Cam’s ability to effectively communicate emotions of sadness and despair. Inspired by a dream featuring her ex-boyfriend, “Burning House” and its accompanying music video impart the tragic, personal story of a woman desperately hoping to fix the wrongs she has committed.

As evidenced by its title, “Mayday” is a song of distress. The mid-tempo groove, drumbeats, and guitar strums create a somber tone of pain and angst. Yet, the music video reveals the song’s underlying theme – one of perseverance and courage. With Director Daniel Carberry and artist Lindsay Marias, Cam’s music video invokes the spirit of American aviator Amelia Earhart and affirms the importance of strong female representation and its role in inspiring a younger generation. Its beautiful, vintage visual effects leave the audience with an emotional story about the potential dangers of remaining in a bad relationship for too long.

Almost six years later, Untamed remains fresh and cathartic. Whatever life throws at you – whether you are hitting the open road, mourning the end of a relationship, or simply longing for some good music – Cam’s Untamed is an excellent companion. The chorus of the album’s titular song includes the lyrics, “Live for a while, whatever feels good.” Despite its songs of heartbreak and angst, Untamed certainly feels – and sounds – good.