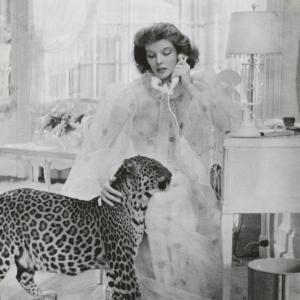 Although Bringing Up Baby was initially unsuccessful upon its release, this 1938 screwball comedy has risen in popularity and is acclaimed by critics and audiences alike. Director Howard Hawks, actors Katharine Hepburn and Cary Grant, and the trained leopard, Nissa, showcase their brilliance. Known for its fast-moving pace, absurd situations, and madcap antics, Bringing Up Baby is perfect for those looking for 102 minutes of lighthearted fun.

Viewers are introduced to the mild-mannered paleontologist, Dr. David Huxley (Cary Grant). David has dedicated his life to assembling a Brontosaurus skeleton and has just obtained the final bone: the infamous “intercostal clavicle.”

While attempting to secure a million-dollar donation to his museum, David encounters the scatterbrained Susan Vance (Katharine Hepburn). After several ridiculous misadventures and a few torn articles of clothing, the pair find their lives increasingly intertwined. Susan receives an unexpected gift from her brother – a tamed leopard named Baby. Realizing she cannot contain a leopard in her townhouse apartment, Susan convinces a reluctant David to help her transport Baby to her aunt’s farm in Connecticut.

The film’s beginning provides cursory insight into David’s life as a paleontologist and its conclusion returns viewers to the museum setting of the first scene. Furthermore, David’s stress and frustration at losing the “intercostal clavicle” juxtapose with the carefree and free-spirited attitude of Susan.

It is almost poetic that the film’s final few minutes center around the collapsing Brontosaurus skeleton – a parallel to the whirlwind way in which Susan uproots and, to some extent, destroys David’s former life. Whether when crashing into a chicken truck, wearing a fluffy negligee, or searching for an elusive leopard in a Connecticut forest, it seems that David always finds himself roped into one of Susan’s crazy capers.

Yet, it is through these misadventures that David is able to rediscover the simple joys of life, laughter and youthful energy. To the general audience (or perhaps to a tired college student like myself), this serves as a reminder to the ever-important balance between work and play.

The film proceeds in a typical romantic-comedy fashion, complete with screwball shenanigans. It was so typical, in fact, that Bringing Up Baby is now considered “the definitive screwball comedy.” Its talented cast of zany characters, dizzying yet comedic dialogue, and bizarre scenarios evidence its undiminished freshness, brilliance, and enduring legacy despite the near 90 years since its release.