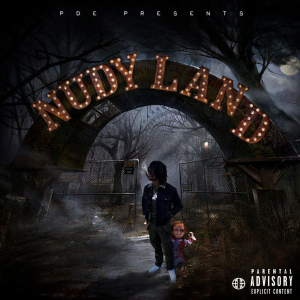 On Young Nudy’s 2017 Nudyland, Nudy, Pi’erre Bourne, and a handful of other producers take the rapidly calcifying mold of modern trap and stretch and poke at it until it’s something completely new.

Nudyland is aptly titled; it feels like a carnival, each song a visceral, often burlesque exhibit of the Nudy persona. Nudy rarely raps about anything other than trap cliches, but the effect of his unrelenting menace and unashamed womanizing is to create a coherent picture of a killer who has it all figured out.

It would be misleading to say, even, that Nudy is “rapping” on Nudyland. Someone put it to me recently: “Nudy adds to the beat”, which reminded me of how I think of Slum Village. Just as the many rappers of SV clicked and kermit-voiced their way through some of Dilla’s bassiest and silkiest beats, Nudy’s crafted an engaging image that exists in sonic and lyrical harmony with Pierre’s rich soundscapes.

To praise Pi’erre’s beatmaking on this tape is not to discredit Nudy in the slightest; few rappers can do what he does on beats so consistently bizarre. But the beats are where Nudyland goes from another enjoyable Nudy project to something more, something special. Pi’erre is really in his bag on this one, such that these beats sound completely out of place in the current trap landscape. DaBaby often raps on 4-bar piano loops that are both catchy and fun; Nudy is rapping on Pi’erre beats that sound like they have a mind of their own.

Without going into too much detail on the beats (one of which, “Hell Shell,” I would take pound for pound as the greatest beat of the last decade), I see Pi’erre here as a producer that possesses a natural, incomparable ear for beat construction, but also one that painstakingly, carefully crafts his beats well beyond his initial intuition. The result is magical, akin to the works of the classical masters who, beyond their indescribable talents, spent years composing the fugues and sonatas that are now synonymous with virtuosity. Pi’erre is a virtuoso beatmaker, perhaps the most visionary of this generation, and Nudyland is thus far the crown jewel of his work.