How Prions Came to Be: A Brief History

The Origins of Scrapie

The origins of scrapie are unknown. Perhaps sheep have always been afflicted by the illness in low numbers, and the disease simply went unnoticed by human herders. What is understood with greater certainty is that incidences of scrapie were recorded during the 18th and 19th centuries when the exportation of sheep from Spain coincided with an increased occurrence of scrapie. Furthermore, inbreeding sheep to improve wool quality, a practice encouraged by economic incentives, also increased the prevalence of scrapie33. When inbreeding ceased, scrapie levels simultaneously fell. The following 1759 document from Germany describes the disease33:

Some sheep also suffer from scrapie, which can be identified by the fact that affected animals lie down, bite at their feet and legs, rub their backs against posts, fail to thrive, stop feeding and finally become lame. They drag themselves along, gradually become emaciated and die. Scrapie is incurable. The best solution, therefore, is for a shepherd who notices that one of his animals is suffering from scrapie, to dispose of it quickly and slaughter it away from the manorial lands for consumption by the servants of the nobleman. A shepherd must isolate such an animal from healthy stock immediately because it is infectious and can cause serious harm to the flock34.

Based on this passage, one can conclude that scrapie is infectious in sheep, but not in the human servants eating the diseased animals33. So far, these conclusions have proven accurate (remember that all cases of vCJD in Britain were linked to beef consumption).

Drawn to epidemiological mysteries across the world, the American physician Carleton Gajdusek came to Papua New Guinea in 1957 to investigate Kuru, a peculiar disease that caused the brain to progressively deteriorate over a 6-12 month period35. The effects of the disease had been devastating, decimating whole villages in the remote
mountainous terrain where the Fore people lived35. The name Kuru means “trembling in fear” in the Fore language, describing the loss of motor function from the disease, but also perhaps the dread with which it was associated29. Peculiarly, the disease did not progress like other infections. The members of the tribe who developed the illness showed no fever or other signs of inflammation such as swelling, pain, and redness of the skin29.

Given that the disease seemed to afflict family members, scientists originally thought it was genetic35. However, closer analysis revealed that the disease was too prevalent and too deadly to be genetic because such a serious condition would be quickly eliminated through natural selection in such a small population as the Fore villagers35. Seeking another explanation in brain tissue from deceased Kuru victims, Gajdusek tried to infect small laboratory mammals with the disease but was unsuccessful37,37. It was only when he repeated his experiments in chimpanzees that he was able to observe the disease, as the primates developed Kuru roughly three years after inoculation with tissue from dead humans38.

It eventually became clear that the disease was transmitted through the Fore practice of mortuary cannibalism35. Following the death of a community member, the individual’s family would dismember them, preparing food from their flesh and internal organs. This practice was reflected in the epidemiology of the disease. Kuru had the highest prevalence among women, children, and the elderly because these individuals were the primary participants in cannibalism and therefore most likely to eat prion infected “morsels” such as brain tissue35.

In order to curb the epidemic, cannibalism was banned in New Guinea after 195939. However, due to the long incubation period of Kuru, there continued to be cases among the elderly into the 1960s probably because they contracted the disease much earlier in life. For his discoveries, Gajdusek was awarded the Nobel Prize in Medicine in 197636. At the time, he hypothesized that the disease was due to a “slow virus” – a virus characterized by an abnormally long incubation period38. While this theory now seems unlikely (at least according to the prion hypothesis), Gajdusek’s work on Kuru did stimulate work on other Kuru-like diseases, including scrapie and CJD.

From his first encounter with a patient afflicted with CJD in 1972, Stanley Prusiner was hooked on the problem of “slow virus” infections – the term used to describe CJD, Kuru, and scrapie at the time40. Working at the University of California at San Francisco, Prusiner voraciously pursued the available literature on CJD and its related illnesses and collaborated with other scientists to try to purify the agent responsible for these peculiar diseases40. Their efforts met with failure, and Prusiner lost his experimental funding from the Howard Hughes Medical Institute due to the seeming hopelessness of his work40. However, after finding support from other sources and continuing his research, it occurred to Prusiner that his inability to purify a virus responsible for scrapie might be because there was no virus to be found40. Perhaps he had uncovered an entirely new form of infection! He published a controversial paper in 1982 in which he coined the term “prion,” and controversy followed. Nevertheless, time and the continuing inability of other scientists to purify nucleic acids responsible for scrapie, along with further evidence in support of the “prion hypothesis,” led to gradual acceptance of Pruisner’s ideas and acknowledgement of their importance. For his contributions to the field, Pruisner was awarded the Nobel prize in Medicine and Physiology in 199736.

Beginning in 1986, Mad Cow Disease, formally known as BSE, has become a major health concern in the UK and the world at large. The outbreak of a neurodegenerative disorder among British cattle in 1986 prompted veterinary researchers to investigate the matter: what they discovered were similarities between the disease killing Britain’s cow’s and human prion illnesses such as CJD and Kuru41.

Incidentally, the disease was being spread through the cow’s feed which contained prion-infected brain tissue from other members of the herd. In response to this discovery, UK officials placed regulations on feed content. However, it appeared the regulations had been applied to laxly, and in 1996, inadequate precautions in British slaughterhouses were linked to a variant of CJD that had appeared in patients much younger than was typical for the disease42. Later, epidemiological studies suggested that the disease had originated from an antelope imported from South Africa to a British safari park in the 1970s42. Scientists believe that the infected antelope was ground into cattle feed, transmitting the prions responsible for vCJD to herds of cows and ultimately to humans. The disease led to a ban by the European Union (EU) of beef import from Britain that lasted for 10 years. That same year, the British government began destroying herds most at risk for BSE infection. Though the public was terrified by the spread of vCJD (which had now killed 165 people in Britain), the danger of infection turned out to be lower than first thought43. Only individuals with a particular mutation in the PrP gene, present in about 40% of the population, can develop the disease44.

Though it was originally hoped to be limited to British cattle supplies, BSE began cropping up in herds worldwide. It was first identified in France in 2000, followed soon by Germany and the remaining countries in the EU45. Infected cows were later discovered in the US and Canada, leading experts to criticize government officials for not looking hard enough for the illness46. In response, both the US and Canada have begun massive quarantines and testing programs46. On the scientific front, researchers have begun genetic studies to engineer BSE resistant cattle. A promising recent find shows that prion resistant goat fetuses can be created by deleting the PrP gene47. 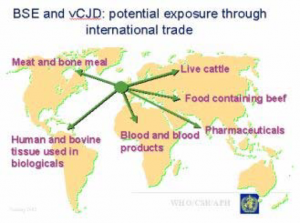