Home » Module 3: Malaria » Malaria: Scourge of the Developing World » The Biology of Malaria: The Flu that Isn’t

The Biology of Malaria: The Flu that Isn’t

Imagine this scene: a patient in Africa, South America, or Asia comes into a regional clinic complaining of headache, chills, or weakness. They may have a fever and complain of aches and exhaustion. In the U.S., a doctor might interpret these as symptoms of the seasonal flu. However, in the tropics, the diagnosis might very well be malaria, especially if the patient is a child less than five years old (see table below: malaria is a major cause of childhood mortality). Economically, it has been estimated that countries with endemic malaria have 1.3% lower growth each year than those without20. 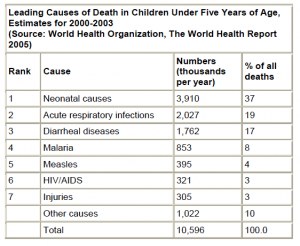 However, the mosquito bite that caused the illness might have occurred weeks before, because malaria-causing parasites typically do not begin multiplying immediately after flowing from a mosquito’s sucker to the blood vessel of the human prey. In fact, it can take weeks for any sign of infection to appear21. Further, some drugs can extend this period of inactivity by weeks or months21. This is the reason American travelers returning from regions where malaria is common are often misdiagnosed when they develop the symptoms described above: it takes a knowledgeable physician to tell the difference between this dangerous infection and a cold picked up on a return plane ride21.

When the signs of infection do manifest themselves, they usually take either an uncomplicated or severe form21:

Uncomplicated: Also known as a “classical malaria attack,” this form of malaria consists of three events that occur in a cycle21: chills, fever, and finally massive sweating. Each of these three stages usually lasts 6-10 hours, and the entire cycle repeats every two or three days21.

Severe: One of the four malarial parasites (P. falciparum – see later for more details) causes an even worse sickness, in which the victim’s blood fails to form scabs when they are cut21. This is because the malaria parasites destroy the body’s blood cells, preventing the normal buildup of cells needed to repair breaks in the skin. The parasites do not just cause damage by killing blood cells, though; by lurking inside, the parasites can cause normally healthy blood cells to get stuck to vessel walls that feed the brain with life-giving oxygen21. This buildup can be fatal if it progresses too far, cutting off oxygen to the brain in much the same way as a severe stroke.

The Signs of the Parasite

Returning to our scene in the tropical clinic, the doctor strongly suspects that malaria is causing their patient’s ailment, but how can they make a definitive diagnosis? A blood smear is one common method and the so-called “gold standard” of malaria laboratory diagnosis22. In this test, a sample of the patient’s blood is stained using special chemical procedures and examined under a microscope in order to see the parasites if they are there, within the blood cells (see image at right for an example)22.

Now, with this blood smear, our doctor has a picture under the microscope – but what does it mean? What exactly are those tiny specks squirming within a patient’s red blood cells? These are the microorganisms that cause malaria: Plasmodia. Because they are single-celled but do have nuclei and organelles, Plasmodia are considered eukaryotes. They are further classified as members of the group Protozoa, single-celled animals lacking chlorophyll (the molecule that traps light during photosynthesis) that usually move with the aid of cilia or other protrusions23. There are over 100 kinds of Plasmodia known, but only four infect humans – these are the ones that cause malaria24. The two most prominent important species are:

P. falciparum, which is found globally in tropical and subtropical regions, is the only kind that can cause fatal malaria24. It has had a particularly large effect in Africa, where it is the most common kind of human-infecting Plasmodia, but it is also found in Southeast Asia24.

P. vivax, while it is also found in Africa, predominates in Latin America and Asia24. Though it does not cause fatal forms of malaria, it can still cause extremely harmful infections24. It is also special because of its ability (like ovale, see below) to hide inside human liver cells for months, lying inactive until favorable conditions lead it to revive and cause the cycle of flu-like symptoms mentioned above24.

P. ovale is very similar to P. vivax but is found only in Africa (primarily West Africa) and the islands of the Western Pacific24.

P. malariae, in contrast, is found worldwide and is notable for being the only species causing malarial attacks (e.g., flu-like symptoms) every three days instead of every two24. Additionally, it can remain inside a victim’s body for a life time, causing long-term disease24.

Before launching into treatments, it seems worthwhile to back up a bit and explain how Plasmodia infect humans in the first place. The biology of these microorganisms is closely linked to their carrier: the Anopheles mosquito.

Of the 2,600 species of mosquito worldwide, only about 40 species of the Anopheles are responsible for spreading malaria25,26. These are found in every continent except Antarctica, and are distinguished from other kinds of mosquitoes by the following features:

1. The palps (sensory appendages protruding from the head) are as long as the proboscis (the feeding tube by which the mosquito extracts blood from its victim)26.

2. A pattern of white and black scales appear on the wings of both genders26.

3. The typical resting position of the male and female Anopheles is with the abdomen (anterior portion of the insect’s body) pointed upwards, unlike other mosquitoes, who position their bodies parallel to the surface on which they are resting26.

The Anopheles rest either indoors or outdoors after feeding on blood. In areas with indoor-resting mosquito species, insecticide-laced bed nets and spraying interior surfaces with DDT (see more information later) have proven effective at preventing the spread of malaria26. Conversely, outdoor mosquitoes are controlled by destroying the sites where they breed, particularly areas of clean, unpolluted standing water26.

Why would a mosquito, an airborne organism, need water to reproduce? The answer is given by the image to the right, showing the life cycle of the mosquito. Water is an excellent incubator for mosquito eggs. In warm environments, the floating eggs will hatch in 2-3 days versus 2-3 weeks in cooler zones (the large number of Anopheles in Africa and Asia makes sense now, doesn’t it?)26. The larva that emerge from these eggs float near the top of the water until they metamorphose into pupa that also cling near the water’s surface26. The final stage of development into an adult mosquito occurs 10-14 days after birth in the tropics. The females then seek blood meals, and the cycle begins anew during their 1-2 week lifespan26.

From Mosquito to Human

Once the female Anopheles begins feeding, it has the potential to become infected with Plasmodia by human with malaria. In fact, statistical research has suggested that malaria infection may actually make human targets more attractive to the Anopheles27. As it turns out, the process by which the malarial Plasmodia gets from mosquito back into an uninfected human is more complicated than simply getting passed through insect saliva into the victim’s bloodstream. For more detail, the reader is encouraged to view a nice animation at:

1. Continue in its current (asexual) merozoite form, continually infecting and

bursting red blood cells in a manner similar to its incubation in human liver cells or mosquito gut cells28.

2. Differentiate into male and female sexual forms (gametocytes) that can return to a mosquito when it feed, traveling through the blood sucked up during the insect’s feeding28. From here, the cycle begins again, with the gametocytes merging as sporozoites, and so forth28.

The clinical symptoms of malaria are primarily caused by the frequent rupture (also known as lysis) of red blood cells during the merozoite phase. As described above, this rupture impairs the body’s ability to transport oxygen, thinning the blood through the loss of cells in a condition known as anemia. This thinning will eventually cause death, because there are no longer enough blood cells to carry the required load of oxygen to all the places in the body that require this vital molecule.

Comprehension Questions:
1. Why does malaria cause anemia (blood thinning?)
2. What cells do trypanosomes (parasitic protozoans) colonize in humans? In mosquitoes?
3. Why do mosquito larvae favor a wet environment?