Though the sunlight is filtered by the gray clouds gathering over the western end of the school, it is enough to reveal the hardened insect shell hanging high on the window frame. It seems to defy gravity, stuck against the sill by some strange insect glue. Past this odd sight, the sun passes through the adjacent window, falling across the empty desk between Fallon and Lang. The map is out, and both boys suspect that Mrs. K. has planned another geography lesson. Their teacher turns towards them.

“Don’t worry, no geography today – well at least not in terms of names.” Maxine and Angelica share a look of relief, having feared that they would have to recall the location of some obscure African country they had studied the week before. The topic of today’s lecture appears in bold lettering on the overhead projector: Malaria.

“Before we start, does anyone know anything about malaria?” asks Mrs. K.
Breaking up the silence that begins to settle between the four students Maxine raises her hand.

“Good,” continues her teacher, “and how convenient you should mention the tropics.” Mrs. K clicks a button on her remote, sending a pattern of red splotches shining from the projector over the world map now on the board.

“Here is the distribution of malaria cases around the world in 2003. The darker the color, the higher number of cases….” 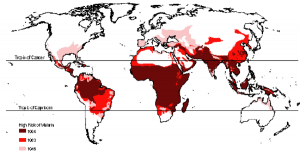 Fallon breathes out, thankful that his instructor has – probably unintentionally – reminded him of the subject of today’s class. In theory, the students are all supposed to complete a set of assigned readings before each unit and be prepared to discuss them on the day the class begins covering that section. However, Fallon had not had time to do the reading during last weekend’s out-of-state soccer match. Racking his brain, he tries to remember anything about malaria . . . he thinks it has something to do with insecticides. Maybe both – or perhaps he has it confused with tuberculosis.

“Does anyone have any observations about this distribution?” Mrs. K. turns, expectantly, towards the four students. Wishing to break the awkward silence as soon as possible, Maxine raises her hand.

“The darker bands are all around the tropics,” she says.

“Correct,” notes Mrs. K., “but why might that have an effect on malaria cases? Also, notice that temperature and malaria distributions don’t always coincide – so there’s clearly another factor.”

Fallon decides to risk embarrassment, and raises his hand.

“Mosquitoes survive in warmer climates and . . .,” he looks quickly at the board, trying to determine if his guess is accurate, “they have to be climates that are warm and damp. That’s why malaria is higher in those bands. Some of those countries also don’t have good access to insecticides or medicine like the US does.”

“Very insightful,” says Mrs. K., smiling. The other three glare at Fallon when their teacher turns her back. They know he has just guessed and resent the praise he often seems to receive for reciting the few sentences of the text he happened to read. Fallon has become used to such reactions from Lang and Angelica but squirms a bit under Maxine’s unpleasant gaze. He wonders if they’re still thinking about the hypnotism incident.

“You’re actually lucky though,” their teacher continues. “A hundred years ago, and the dark red you see in Africa was also in the Southern US. The difference, these days, is . . . a ‘small’ difference, on a large scale.” Her students look puzzled. “Let me show you.”

A click of a button brings a new projector image onto the whiteboard, this one of a mosquito with its proboscis cleanly piercing the skin of an anonymous human snack. There’s something strange, Lang thinks, about this arrangement. The mosquito lives by blood-feeding that also spreads malaria. There always seem to be payoffs in nature – species usually seem to harm each other in some way, rather than beneficially sharing the environment.

“Meet the tiny creature responsible for spreading malaria throughout the
developing world,” continued Mrs. K. “The Anopheles mosquito injects malarial parasites into the bloodstream of its prey where they cause the symptoms you read about last night in your book.” She pauses. “Which I assume you read about in the book. I hope we don’t need another surprise essay assignment.”

The four all vigorously shake their heads, not wanting to repeat their experience last month during the tuberculosis unit.

“Since you all seem so well-versed, here’s another question: if they spread malaria, why don’t we simply kill all the mosquitoes?”

Angelica raises her hand in response. “Some of the insecticides are almost as bad as malaria – at least that’s what Rachel Carson wrote about DDT.”

“It’s kind of like chemotherapy,” adds Maxine. “The cure can be almost as bad as the cause.”

“Hold on to that thought,” Mrs. K. replies, “it may be helpful when we talk more about vaccines in a few months. For now, though, does anyone see any parallels between malaria treatments and AIDS?”

“In both cases,” Lang answers, speaking for the first time today, “the treatments are cheaply available in the Western world but too expensive for most developing countries to afford. It’s not a question of the treatments not existing but of economic incentives. There’s no financial benefit for pharmaceutical companies to generate drugs for poor countries.”

“Very true,” says Mrs. K. “Which raises another important question: how do you best treat a disease when a country can’t afford the drugs that are so readily available in the US?” She walks the short distance to the desk, picking up a set of papers. “These articles should help you think about that problem. Since we’re almost out of time for today, you can begin looking them over, and we’ll begin our discussion again next time based on what you’ve learned.” She stops. “So please do the reading.”

The four comply, beginning to busily leaf through the packet as Mrs. K. distributes them. As if the sound of rustling pages were enough to awaken its occupant, the cocoon outside begins to shudder, and a sliver of yellow appears in a crack between the enclosing fibers of musty brown. The period bell rings just as the sleeper emerges – but it’s not a disease-spreading mosquito, just a harmless butterfly grown out of season, left to fend against an increasingly chilly sky.

Questions:
1. What is malaria? Why does it show a unique global distribution?
2. Do we need a new policy to distribute malarial drugs in the developing
world?
3. Is DDT an effective control option for malaria?
4. What are some non-insecticide, non-drug possibilities for malarial control? (Think public health measures.)
5. Describe the relationship between a country’s economics and malaria
prevalence.