Your Body is (mostly) Not You

It’s true: even though 10^13  cells compose your organs and tissues, there are 10^14 extra cells, from bacteria to eukaryotic parasites, who are just along for the ride. Thus, for every one of your cells, there are ten minuscule hitchhikers – and this doesn’t even account for non-cellular guests like viruses. Luckily for us, most of these co-inhabitants of your body aren’t harmful, and peacefully cover areas such as the inside of your digestive tract and mouth. How is it possible for you and so many microscopic neighbors to live side-by-side? The answer is the innate immune system.

While human skin may seem fragile, able to bruise or be cut in everyday activities, it is a remarkable barrier against many inadvertent or intentional invaders. The layer of cells forming human skin is enough to keep out many pests, and the harmless ones don’t usually cause trouble unless they fall through a gap in this wall.

Another of the body’s first-line defenses isn’t so visible, coating the insides of your digestive and respiratory system: mucus. By coating these cells, this slimy substance prevents invaders from attaching and growing in places that otherwise present a tempting home.

However, even if an invader does get inside, there are additional defenses. Let’s follow the path of one such unwanted visitor, who we’ll call Pathogen X. Pathogen X, unlike most of the body’s cellular hijackers, is not content to simply co-exist with skin cells and muscle cells: it seeks to actively invade the host. Moving along the body’s surface (in whatever way it does), it finds a crack in the skin, mucus, or both that allows it to slip past these first lines of defense.

Fortunately though, the immune system has a few tricks left of its own. One is a set of large cells called phagocytes, which means “eaters.” This is an apt description of what they do, engulfing any unfamiliar intruders in the areas they patrol (they’re not particularly picky diners). One class of these eaters which we’ll encounter many times in this course are macrophages – their name literally means “big eaters.” Like a not-particularly bright watchdog, they devour invading pathogens, digesting them with harmful oxygen-based molecules. However, another class of phagocytes, called dendritic cells, takes a slightly more sophisticated approach, engulfing their prey but also keeping a record of what they’ve found. They do this by displaying a piece of Pathogen X on their outer membrane, and, like a watchdog playing fetch, return to other members of the immune system to demonstrate their find.

Retreating deeper within the body, the dendritic cell shows the fragment of Pathogen X it has acquired to its cellular cousins, the more intelligent lymphocytes. These cells won’t go after just any prey: they have to be shown a target. This is the purpose of the Pathogen X fragment: to act as a special kind of molecule called an antigen. This stands for antibody-generating compound, and in practice it serves as a kind of molecular “fingerprint” so the lymphocytes know what to look for. From here, the two classes of lymphocytes differ in how they react to the knowledge that Pathogen X is invading.

The first class of lymphocytes are called B-cells. The B is short for bone marrow, which is where these cells are formed, but you can also think of them as antiBody-cells, because their response to infection is to produce antibodies to respond to the antigen signal. An antibody is a “Y” shaped molecule that functions as a kind of “metal detector” for particular molecules. Just as one end of a metal detector is used to sense the presence of metal, the antibody helps lead other members of the immune system to the site of infection by recognizing the “fingerprint” – the antigen – used to generate it. This recognition occurs because the inside of “prong” in the antibody is very specially made so that it clings to the antigen more tightly than other molecules: the amino acids are just the right shape and composition so that the two surfaces interlock. Once it attaches to an antigen, or, more specifically, a certain recognition site on the antigen called an epitope, the antibody directs both T-cells (see below), phagocytes, and destructive proteins called complement to cells infected with Pathogen X, which display the Pathogen X antigen on their surface, or to free-floating copies of Pathogen X. Complement can poke holes in the membrane of a bacterium or cause damage to a viral coat, the phagocytes can engulf the pathogen, and Tcells secrete harmful chemicals to destroy cells infected with the pathogen (see below).

Each B-cell produces a unique antibody, so your body is constantly generating new Bcells so that it has a chance of making ones suitable for combating any given pathogen the immune system might encounter. How the B-cell uses the antibodies to respond to an infection depends on how developed they are. The younger, less developed B-cells have their antibodies protruding from their plasma membranes, and use them to sense the presence of antigens. Others, the older B-cells, are also called plasma cells. They are larger, and secrete large quantities of antibodies into the bloodstream. Plasma cells are usually only produced after the body has responded to a pathogen, since they must develop from the younger class of B-cells.

However, some lymphocytes don’t use antibodies. These are called T-cells. As before, the T is an indication of the origin of these cells, an organ called the thymus, but you can also think of them as Tracker-cells or Translator-cells. The first kind, the trackers, are called “killer” T-cells, and roam throughout the body looking for the antigen for Pathogen X. As mentioned above, cells infected with Pathogen X will display its antigen on their surface, and when the killer T-cells find it, they latch on, secreting harmful chemicals that destroy the pathogen infected cell. The other kind of T-cells, the translators, are also called “helper” T-cells. While both classes of T-cells physically sense the antigen with a receptor on their surface, the helper “translators” relay the message to the B-cells. Additionally, the helpers secrete other chemicals that help B-cells produce antibodies, and mobilize killer T-cells to more effectively destroy the target pathogen.

The beauty of this system is that lymphocytes have extraordinary memories: once they have “seen” a particular antigen, they never forget it. Thus, on Pathogen X’s first visit, it will be finished off by the lymphocytes if the phagocytes don’t completely destroy it. Subsequently, if Pathogen X invades the body, there will already be a group of lymphocytes waiting that “know” exactly how to kill it, having already generated antibodies or acquired other means to specifically combat this foe. At this point, your body is said to be immune to the pathogen. This is how natural immunity works, which is different that the artificial immunity caused by vaccines, as detailed below.

The above scenario is essentially how flu shots or other vaccines function. These preventative measures contain either an individual antigen, or the antigen attached to the whole pathogen. However, whole pathogens are either weakened or deactivated. For example, a virus might replicate slowly, or a bacterium might be completely dead in such a sample. Confronting these individual antigens or crippled pathogens, the immune system easily overcomes the intruders, but not before generating an adaptive arsenal of lymphocytes in preparation of future attacks. Thus, when the full-strength pathogen invades, there is already a carefully developed defense specifically targeted against it waiting in the immune system2. Vaccines are also helpful because the sooner the pathogen is destroyed the less likely you are to pass it on to those near you. In fact, if enough members of a community are vaccinated, the rate of transmission of a pathogen is low enough to eventually wipe it out. This is called herd immunity, and is what allowed the World Health Organization (WHO) to destroy smallpox earlier in this century with limited vaccine stocks: not everyone had to be vaccinated to prevent the spread of the virus, just enough people in a given area so that its transmission rate eventually dropped to nothing.

There are several ways to stimulate the immune response through a vaccine, as summarized in the following table. 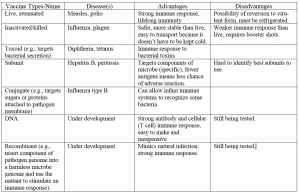 What does an immune response look like to the naked eye? This is actually a trickier question than one might think, as it is easy to confuse a visible symptom that is caused by a pathogen, or one that results from the immune reaction itself. For example, consider the two following symptoms:

A: After contracting a bacterium, a patient develops ulcers.
B: In response to a viral infection, a patient runs a fever.

The first is an example of a symptom caused by the pathogen: the ulcer is due to the bacterium destroying stomach lining tissue. In contrast, a fever is a reaction by the immune system to the viral infection. This second case is part of a larger phenomenon called inflammation, from the latin word for “flame” or “burning.” The classic signs of an inflammatory reaction are probably familiar to you: they include 1) increased body temperature, 2) redness at the site of infection, 3) increased fluid production or swelling at the site of infection (as in a blister) and 4) pain. Thus, when you see the word inflammation in the rest of this course, you should know that it simply means any of the four symptoms listed above, caused by the immune system responding to a microbial invasion.