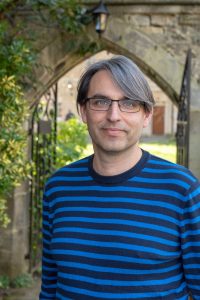 Jason D. Lotay is a Professor of Pure Mathematics at the University of Oxford. He undertook his undergraduate and graduate studies in mathematics at the University of Oxford, where he jumped between St Edmund Hall, New College and Christ Church (where he was a Senior Scholar), and received his DPhil in 2006. He was awarded a Junior Research Fellowship at University College, Oxford, for his first postdoctoral position, and then an NSF Mathematical Sciences Postdoctoral Research Fellowship, through which he visited the Mathematical Sciences Research Institute, Berkeley. He was awarded an EPSRC Career Acceleration Fellowship in 2009, which he took up in the Geometry group at Imperial College, London, and obtained his first permanent academic position at University College London in 2011. He left UCL and moved back to Oxford in 2019, where he is also a Tutorial Fellow at Balliol College (his fifth Oxford college).

Lotay’s general area of research interest lies in special geometries, especially related to special holonomy, minimal submanifolds, gauge theory and geometric flows, studied mainly via differential geometry and geometric analysis techniques. More specifically, he has made particular contributions to the study of moduli spaces in special holonomy and calibrated geometry, he has given construction and classification results for key examples of calibrated submanifolds and instantons, and provided fundamental advances in our understanding of the G2-Laplacian flow and Lagrangian mean curvature flow.

Lotay has always maintained a keen interest in the links between his work and theoretical physics, and hopes to pursue these connections further through the Collaboration.