The Brennan Lab has determined a number of “first structures” of many biologically important proteins and protein-nucleic acid complexes including:

We utilize macromolecular crystallography, cryo-electron microscopy and a wide variety of biochemical and biophysical methodologies. Each of the solved structures listed above revealed an atomic view of their DNA recognition mechanisms and helped unravel their roles in transcription regulation of biological processes such as de novo purine biosynthesis and carbon catabolite regulation as well as their induction mechanisms. 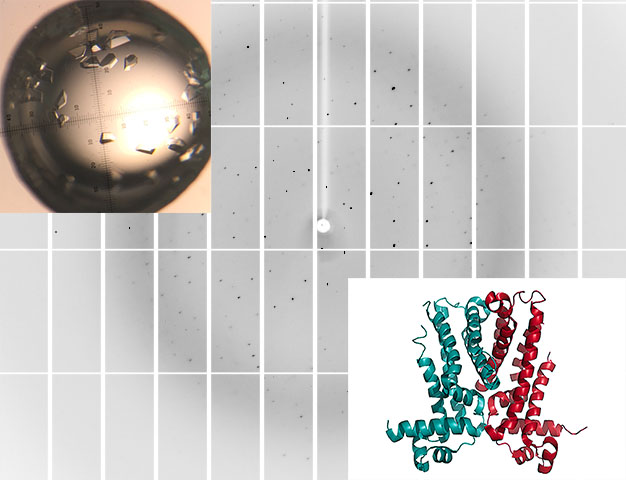 Over the past decade, the Brennan Lab has had a strong interest in understanding the mechanisms of multidrug resistance (mdr). We were the first to describe the structures of any multidrug-binding transcription repressor or activator, named QacR and BmrR respectively, in complex with multiple drugs.

The QacR-drug structures revealed the multisite, or minipocket mechanism, by which a single protein—multidrug efflux pumps included—bind multiple chemically and structurally dissimilar ligands and toxins. We defined these pockets as polyspecific rather than nonspecific. The BmrR-drug complexes defined a second mechanism of multidrug binding, whereby the drug adjusts to a more “rigid” or fixed binding pocket.

We continue our studies on several novel multidrug-binding proteins, including:

Our goal is to define their molecular mechanisms of multidrug binding, induction, and gene regulation. Our MepR and MtrR work is in collaboration with Glenn Kaatz at Wayne State University School of Medicine and Bill Shafer at Emory University. We have also joined forces with Mehreen Arshad at Northwestern University to research MprA.

The Brennan Lab continues to address unresolved issues surrounding the sensing and detoxification of reactive oxygen species (ROS), as our interest in sensing and reducing ROS in Neisseria has led to biochemical and structural studies on crucial MtrR, which is not only a multidrug binding transcription factor but a transcriptional regulator of key defense systems against the toxic effects of ROS.

In a long-standing collaboration with the laboratories of Maria Schumacher at Duke University and Kim Lewis at Northeastern University, the Brennan Lab is  studying bacterial persistence, which results in multidrug tolerance and is the likely origin of recurrent, incurable infections.

Our collaboration described the structures of the first bona fide E. coli persistence factor, HipA, and demonstrated that:

In order to understand the primary means of this toxin’s inhibition by its antitoxin mate, HipB, we determined the structure of a HipA-HipB-DNA complex, which revealed that HipB locks HipA into an open conformation and sequesters the toxin from many targets. We also found that HipB is responsible for the autorepression of the hipBA operon. In more recent studies, we determined the structures of a dimer of the HipA-(HipB2) complex bound to the O1-O2 and O2-O3 operator sites, which gave insight into the heritable nature of UPEC persistence. Currently, we are in the process of determining the HipA consensus phosphorylation sequence, and have started pursuing the molecular and structural bases of persistence in other pathogenic bacteria, including Burkholderia, and Mycobacterium.

The Brennan laboratory has pursued its interest in post-transcriptional regulation by carrying out structure-function studies on Hfq, an RNA chaperone that binds both small noncoding RNAs and their target mRNAs to effect gene expression. We chose Hfq proteins from both Gram-positive and Gram-negative bacteria and were the first to show the mechanisms these proteins use to bind U-rich RNA as well as A-tract RNA. We continue our structural and biochemical studies on E coli, S. aureus and L. monocytogenes Hfq proteins bound to other large RNAs and DNA in order to delineate all sites of nucleic acid binding and the full function of Hfq.

In a new area of research, we want to understand one of the key defense mechanisms that pathogenic fungi utilize when jumping from the surrounding environment to their warmer human hosts.

Pathogenic fungi are a growing scourge in clinics as more patients, who are immunocompromised, succumb to these microbes. Treatment of these fungal pathogens is hindered by rising drug resistance; the limited availability of effective drugs, which are often decades old; and drugs that can have unwarranted side effects. For the fungal invasion to be successful, the disaccharide trehalose must be present, and given the critical importance of trehalose in protecting these pathogens from higher temperatures, we are studying two enzymes that synthesize this disaccharide: trehalose-6-phosphate synthase and trehalose-6-phosphate phosphatase. We have solved each of their structures in the presence of substrates and products as transition-state complexes and have elucidated their substrate specificities, catalytic mechanisms, and their use as templates for structure-based drug design, which is now a major focus of our laboratory.