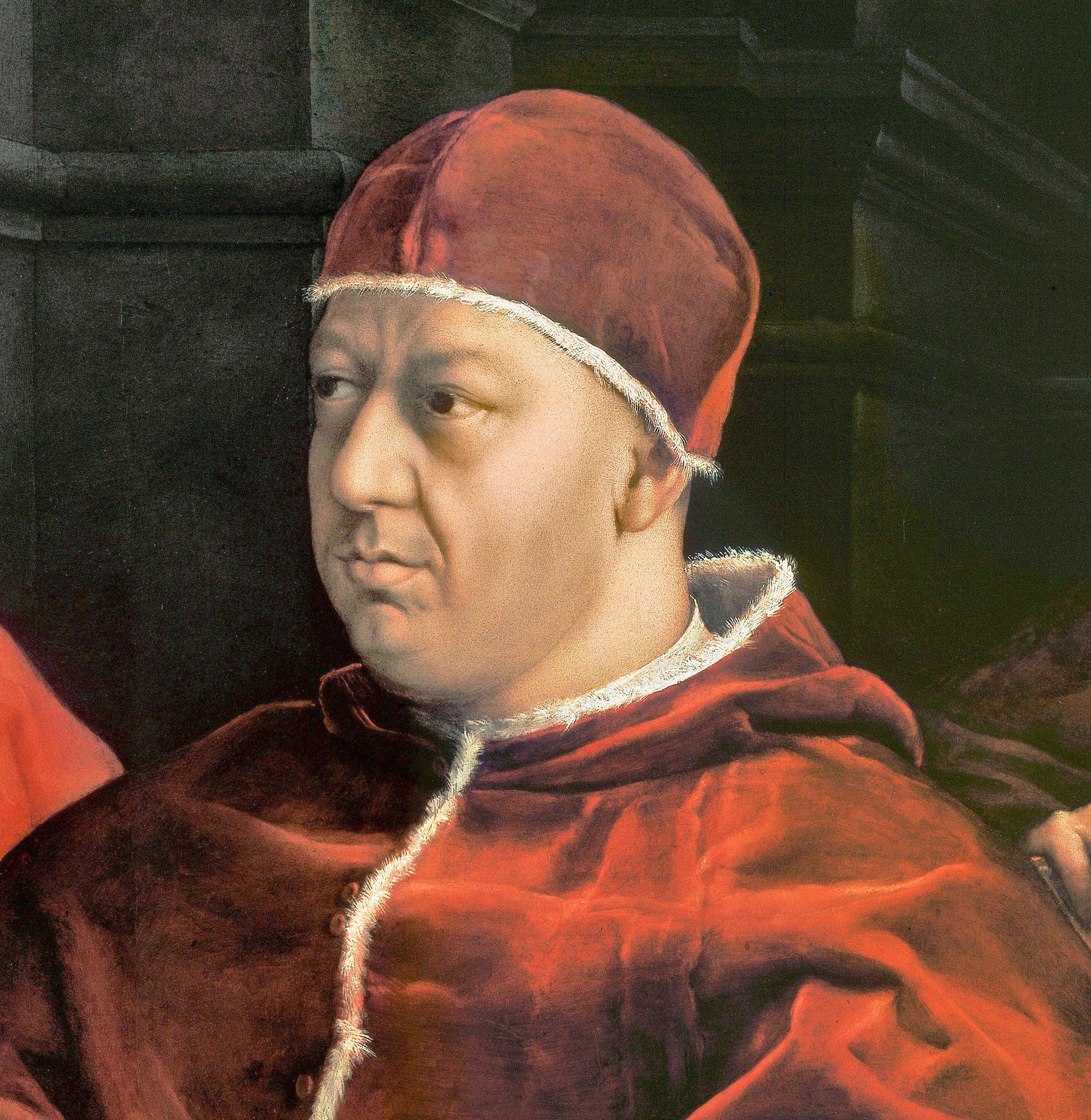 “God has given us the papacy, let us enjoy it.”  -Pope Leo X

Pope Leo X (c.1475 – c.1521) was born Giovanni de’ Medici, the second son of Lorenzo de’ Medici in Florence, Italy, on December 11, 1475. He is believed to received his baptismal name after his paternal grandfather, Giovanni, the second son of Cosmo de’ Medici. When Giovanni was born it was time of peace and tranquility in Italy. This was the time when Sixtus IV was the Pope and the political system of Europe was not fully formed.  He was destined for a career in the Church at a very young age and from the day he was born, Lorenzo raised him to be eventually a higher dignity. In 1482, at the age of seven, Giovanni de’ Medici received tonsure, which is the cutting of one’s hair to be a monk and became declared capable of ecclesiastical preferment. It was then when Giovanni’s father applied to the king of France, Louis XI to grant his son a spot in the church. Lorenzo responded to the King’s letter regarding his desire of his son to be in the church:

“On the nineteenth day of May 1483, we received intelligence that the King of France had, of his own motion, presented to my son Giovanni, the abbey of Fonte-dolce. On the thirty-first, we heard from Rome that the pope had confirmed the grant, and had rendered him capable of holding a benefice, he being now being seven years of age.” (Roscoe, 16)

The death of Sixtus IV on August 13th, 1484 gave Lorenzo a more ambitious idea to advance his son’s position within the Church. Giovanni had a high quality education where he studied theology and canon law at the University of Pisa. In March 1492,  Giovanni was the youngest cardinal elected when he was only thirteen years of age because the older Romans found Giovanni’s behavior mature for his age. When Giovanni was a cardinal he patronized musicians, scholars, and artists and became the principal representative of Florence at the papal court. On March 11th, 1513, Giovanni was elected Pope where he continued ancient tradition and took up the new name, Leo X. His election was seen as the beginning of a new golden age for Europe and the Church. As the Pope, Leo held all the keys to all the church offices that he opened for his family and Florentines. He appointed some of his family members as ranking officials in the church such as electing his cousin Giulio (Pope Clement VII) a cardinal. Leo inherited the responsibility of cultural patronage that was passed on from his predecessors where he received the grand designs for a papal kingdom that was started by Nicolas V in 1455.

In 1515, Leo renewed the decree that authorized the sale of indulgences that was first established by his predecessor. He saw an opportunity to rebuild the St. Peter’s Basilica and the sale on indulgences would help provide sufficient resources for the rebuilding project and he sought to authorize the sale on indulgences in Albrecht of Brandenburg’s territories. Half of the proceeds from the indulgences would go to Albrecht’s debt to Jakob Fugger while the other half would go to finish St. Peter’s. Due to this building program in 1517, Martin Luther posted his 95 Theses expressing his distaste against the sale of indulgences. Luther did not directly mention Leo’s name, however he did question the papacy’s right to grant indulgences. In 1520, Leo threatened to excommunicate Luther if he did not go to Rome within sixty days to renounce his ideas. Later in January of 1521, Leo followed through on his threat and excommunicated Luther. 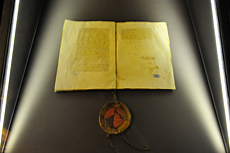 The document Decet Romanum Pontificem that excommunicated Luther in 1521. This photo was taken from an exhibition in the Capitoline Museums, Rome 2012. http://www.foto-grafo.de/Lux-in-Arcana/documentary_1.html

After his death later that year from pneumonia, his attempts to prosecute Luther and his teachings regarding indulgences furthered the development of the Lutheran doctrine and the Western Church. Leo X was able to bring the papacy some hegemony throughout Italy by using dexterity in specific diplomatic avenues. Henry VIII of England was given the title Defender of the Faith. The Defender of the Faith is a title belonging to the sovereign of England. The award was given to Henry VIII for his pamphlet written against Martin Luther called the  “Assertio Septem Sacramentorum Adversus Martinum Lutherum”, meaning the Declaration of the Seven Sacraments Against Martin Luther. After his break from the papacy, the title was taken away from him by Pope Paul III but was restored by the king of Parliament in 1544.

Watch the video below for a more detailed description of the indulgences during the Reformation!