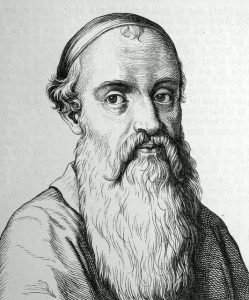 Menno Simons was a prominent religious leader for the Dutch Anabaptist movement during the sixteenth century due to his help in supporting and establishing Anabaptism as a legitimate Reform movement. His preachings live on through the Mennonites, a religious sect which birthed many different branches including the Amish. Simons’ main theological concerns lay in infant baptism, peace, and simple living under the law of Christ.

Born in Witmarsum, Friesland in the Netherlands, Simons grew up in a peasant family and at an early age, enrolled in a monastic school. Soon he learned both Latin and Greek and became a scholar with interests in humanism and theology.

Simons was ordained as Catholic priest in his mid-twenties, even though he had never read from the Bible; he did not want to be misled by misinterpretation of the Scripture. A few years after becoming a parishioner in his hometown, he became agitated by a controversy over transubstantiation. In response, Simons began to study the New Testament as well as the writings of Martin Luther. Only four years after earning priesthood, he transformed into an evangelical preacher, but would not leave the church for another five years.

What led him to leave the church finally in 1536 was the death of his brother, an Anabaptist who was attacked and died as a result of refusing to fight back. In addition to leaving the church, Simons also married and had three children, only one of whom outlived him. Once committed to Anabaptism, he was almost never in one city for too long, spreading the word around the northern parts of the county and fearing persecution. Simons was not a martyr, however, and died at the age of sixty-five from natural causes.

Simons thought that baptism should be linked to spiritual maturity, believing that there is an “age of discretion” in which a child of God comes to understand his own faith and professes it.  He wrote in objection to the consideration that unbaptised infants were pagans, and envisioned a Christian community where adults guide children into spiritual maturity. In juxtaposition to radical Anabaptists, Simons took on the role of advocating pacifism. This changed the way in which Anabaptists were perceived because many other groups of Anabaptists engaged in rebellions and murder. As a result, the role Simons and other pacifists had in pursuing and promoting a peaceful Reform led to the survival of the Anabaptist movement.

Note: Other practicing pacifists  include George Fox and Margaret Fell, both of whom are prominent figures of the Quaker movement.