The Rule of Bloody Mary

Mary I of England (1516-1558) coined the name “Bloody Mary” due to her aggressive and bloody pursuit of the restoration of Roman Catholicism within the lands she ruled. She even instituted Spanish input, from her mother and eventual husband Philip, in her fight for the rightful religion of the state, implementing references to the inquisition in the punishments used and the refutation of “heresy.”  She dodged infamous hurdles in her race to become the first female ruler of England, fighting to win back the spotlight from her half-sister Elizabeth, the daughter of her father, Henry VIII and Anne Boleyn. Not only did she face the constant threat of her sister, but she was often tossed around as a pawn by Henry. She was unmarried when she finally began to taste power, though not from lack of effort by her father. He repeatedly tried to pass her off to potential matches in order to gain the one thing he longed for more than anything else, a son. 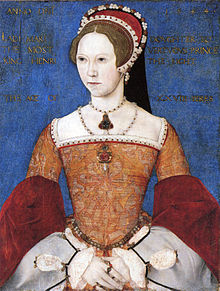 After many years had passed, Mary’s mother, Katharine of Aragon and daughter of the great Francis and Isabella of Spain, remained barren when it came to producing sons. She suffered from many miscarriages, Mary being the only surviving offspring of Katharine and Henry’s union. This meant that Mary, a woman, was the only legitimate offspring of the King, but a female could not rule England. During his search for a suitable husband for his daughter, Henry never stopped looking for a way to produce a son. He was only the second Tudor monarch, given that his father had won the crown only thirty years before Mary’s birth in 1516. He needed a male heir to secure the throne for his family. Eventually, the King stumbled upon a kind woman named Anne Boleyn, the daughter of a simple knight and sister of a former mistress. Henry quickly tried to annul his marriage to Katharine. The Pope, as well as Katharine, refused this request, causing a power struggle between the Vatican, England, and Spain. In 1534, Henry broke ties with Rome and created the Church of England with himself as the Supreme Head. He then granted the annulment himself, finally dissolving the marriage between he and his former queen. After their union, Anne finally bore Henry a son. They named him Edward. Even though Mary was the true legitimate heir to the throne, Edward became King of England at the age of nine, ruling what he created to be a Protestant England. However, his rule did not last long due to an illness that was thought to be consumption that eventually killed him. 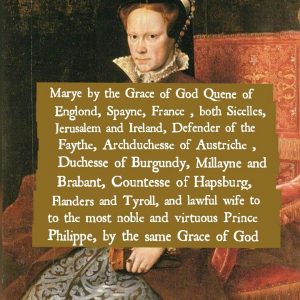 From the beginning, Mary refused to acknowledge any other religion besides Catholicism. Even when England was said to be Protestant, she still attended Latin mass every day. When Edward came down with the sickness that would eventually take his life, much of England was fearful of the potential rule of a Catholic Queen. Not to mention the fact that her eventual husband, Philip II of Spain, was a Catholic ruler as well, and she often took her directives from him, even when he was not present in England. In addition, she was also a woman, and there were many underlying political assumptions concerning female reign. To many’s disliking, she did ultimately secure the crown and become the Queen of England. Much of the land she had power over still claimed to be Protestant. This sparked the threat of revolution and an attack on the crown. In a letter written to her by Sir Edward Carne, there was talk of a possible attack. Her subjects were arming to fight her insistence on the Roman Catholic religion. However, this struck no fear in the newly crowned Queen for she was ready to support her beliefs, no matter what it took.

For more information, please watch this documentary on the Catholic Queen by Timeline:

Ttyler, Patrick F. England Under the Reigns of Edward VI and Mary, With the Contemporary History of Europe, Illustrated in a Series of Original Letters Never Before Printed. Vol. II. London: Ordinary to Her Majesty. 1839. Accessed September 25, 2017.