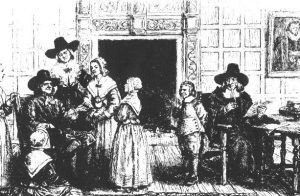 Born in 1614 as Margaret Askew, Margaret Fell would go on to become published Christian author and a recognized founder of the early Quakerism movement.

At the age of 16, Margaret Fell married Thomas Fell, a wealthy barrister, and in doing so became the lady of the prestigious Swarthmoor hall. Following the birth of her ninth child twenty years later, Fell came into acquaintance with a traveling preacher by the name of George Fox, and found herself moved to tears by his description of the spirit of Christ that “lighteth every man that cometh into the world,” and compelled them to “speak to that of God within themselves” as the prophets and authors of scripture had done so before them.

With the eventual support of her then-husband Thomas, Margaret Fell joined Fox and opened up Swarthmoor hall as a hub and meeting place for early Friends. Fell helped sustain the early Quaker movement primarily through traveling ministry within England, correspondence with other Quaker theologians, and facilitation of Quaker worship in her home. She was also an author; between 1652 and her death, Fell would publish upwards of twenty pamphlets, Women’s Speaking Justified the most widely recognized among them, on Quaker theology and the role of women in Quaker vocal ministry. The stance of Fell and other founding Quakers on the role of women in ministry, and the community, stands at odds with the precedents set by Reformers before them; John Calvin notably asserted in his commentary on Timothy 2:12 (“But I do not allow a woman to teach or exercise authority over a man. She must remain quiet.”) that  “woman . . . by nature (that is, by the ordinary law of God) is formed to obey…it will be a mingling of heaven and earth, if women usurp the right to teach.”

A significant number of Fell’s pamphlets were written by during her four-year-long imprisonment in Lancaster prison,  for her refusal to swear oaths and her continued allowance of Quaker worship in Swarthmoor hall. Following this period of imprisonment and the death of her husband,  she married George Fox in 1669, only to be imprisoned again in for breaking the Conventicle Act, a piece of parliamentary legislation that forbade religious assemblies of more than five people outside the jurisdiction of the Church of England. Following her release in 1670, Fell would spend the remaining years of her life dedicated to religious mission work and outward opposition of the Society’s transition into its period of Quietism, which stressed plainness in a dress and speech as tenants of Quaker practice.