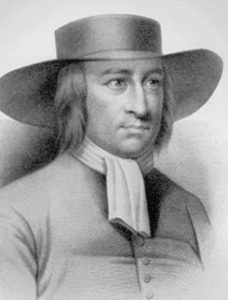 George Fox (July 1624 – January 13, 1691) was a mid-seventeenth century English Protestant Reformer and founder of the Religious Society of Friends also known as the Quakers. Fox, born to a Puritan family during a politically and religiously tumultuous time in England, spent much of his youth as a “Seeker,” or a Christian during the period actively searching for religious answers outside of the traditional church structure. Heavily influenced by Calvin and Arminian thought before him, and inspired by what he found to be “the failures of Christians to live up to their profession,” Fox began his journeys in reformation as a Seeker traveling around mid-land England during the English Civil Wars (1642-1651). Through these travels, he came to find others like him, and beginning in about 1647, many early Quaker movements were forming under Fox’s guidance. Then in 1652, Fox climbed to the top of Pendle Hill, and declared “From the top of this hill the Lord let me see in what places he had a great people to be gathered,” which Fox and his fellow Quakers marked as the official start of the religion.

Informed by the primary spiritual value of “that of God” within everyone, a testimony derived primarily from the Gospel of John, early Quakers (including Margaret Fell) were a part of the larger radical reformation movement preaching for social equality and working to develop what they believed was a “primitive Christianity revived.” Fox, among thousands of others within his movement, consistently faced religious persecution during its early years, often experiencing imprisonment and charges of heresy for their preaching. However, due to the rapid growth of Quakerism ingraining itself within the country and later in the establishment of the Toleration Act of 1689, the radical movement persisted far past Fox’s death in 1691.