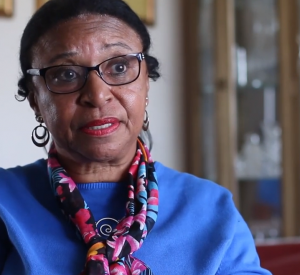 “When you live through Jim Crow, segregation, integration and this is another type and then it seems like a lot of people don’t realize that a history forgotten is bound to be repeated; therefore, young people need to be aware of different methods of repeating history through another door, [otherwise] they won’t even know what hit ‘em.”

Although Rosanell Eaton is considered the main plaintiff of the North Carolina NAACP v. McCrory case and receives the most media coverage, the story of her daughter Armenta, another plaintiff in the case, is unknown to many. This mother-daughter relationship reflects the inter-generational heritage of civil rights activism, especially the power of Southern African-American women in community organizing. Rosanell and her generation influenced Armenta’s generation of civil rights activists, and today they share the fear of being trapped in a dead-end after 70 years of progressing justice.

Armenta’s family was independent by the standards of other a rural North Carolina African Americans in the 1950s. Her father’s family moved to Franklin County, NC from Cary and purchased the farm the family she still lives on today. Her father was not a sharecropper; he owned his own land. After Rosanell married the man that would be Armenta’s father, they started taking care of their farm, which they alternated crops of tobacco and cotton. Armenta and her siblings grew up working on the farm.

Because Armenta’s parents did not make their livelihood working on a white man’s farm, they were able to be outspoken about the racial injustices they witnessed. Her parents were members of their local NAACP branch, talking openly about African Americans’ concerns and attended meetings in town. Armenta grew up observing her parents’ lives organized around solving social injustice, and these values were imprinted into Armenta.

Growing up, Armenta experienced the side of social progress that many want to forget. Due to her parents’ independence and active membership in NAACP, the Eaton family was harassed. Armenta’s father passed away when she was just thirteen. Without the protector of the house and with a mother working to feed the family, Armenta felt responsible to fill her father’s role. She would stay up all night, sitting on the living room couch with a shotgun in her hands. She was waiting for drive-by violence or midnight harassment.  The Eaton’s house and their relatives’ homes were shot at in the middle of the night, on multiple occasions. Armenta says she was not afraid, but she did feel guilt as a child that she could not protect her family.

When Armenta was growing up, there was a non-uncommon highway billboard on the way into Franklin County reading “Welcome to Klan Country”. Armenta spent her childhood as black girl “Klan country”, as if it was truly a different county.

Eventually Armenta realized she could not protect her family with a shotgun alone. She decided to actively participate in social movements with her mother. First, she started to go around town to register voters with her mother. Rosanell was one of the four Special Voter Registrars in Franklin county. Armenta would help her mother set up registration tables and knock on doors. After a few years, Armenta was able to start registering people on her own. Although she did not have any problems with registering white people to vote, her priority was making sure black folks could register.

Rosanell planted the seeds of social justice in her daughter, and Armenta’s grew her own branches. After college, she was offered a job at the Commission for Racial Justice, a civil rights organization. Her supervisor was her parents’ friend Leon White, whom her brother was named after. At CRJ, she started to working on contemporary justice issues she cared about, beyond the issues she worked on with her mother. Armenta was an organizer with many historical activism moments. She stood with Reverend Benjamin Chavis, Joan Little, Ken Ferrucio and most recently, Reverend Barber.

While Armenta was working for the causes she cared for, Rosanell was working to desegregate schools in Youngsville, NC. Just as her daughter followed her while registering people to vote, Rosanell watched out for her daughter organize in historical movements for justice.

“You know, this is all turning back the way it was, before I can get in the grave”

Although the two women share a home, they live very independent lives. Rosanell, now 94 years old, still drives herself around and runs her errands. Both women are plaintiffs in the North Carolina NAACP vs. McCrory case, and their activist paths finally converged. The women share a passion of making sure that people go to the polls. As soon as Armenta heard that the first Moral March was happening – she was in. Later on, as Reverend Dr. Barber was looking for plaintiffs, Armenta volunteered. She knows how much a vote means because for her, “voting is how you pattern your life”.

Armenta sees how this law is bringing her mother back in time. She recalls a moment recently when Rosanell said to her, “You know, this is all turning back the way it was, before I can get in the grave”. Armenta understands her heartbreak, saying about her mother’s generation–“When you live through Jim Crow, segregation, integration and this is another type and then it seems like a lot of people don’t realize that a history forgotten is bound to be repeated; therefore, young people need to be aware of different methods of repeating history through another door, [otherwise] they won’t even know what hit ‘em”.