In an effort to bring you the news in an easy-to-view, and easy-to-remember, website, we are excited to announce that all news, articles, announcements, etc. will be posted on our NEW Duke Orthopaedics “Latest News & Articles” page, housed on our main Duke Orthopaedics website. You can now search for articles based on category, date range, or keyword – and best of all, everything is housed on ONE site! We hope you enjoy!

We are excited to announce that Dr. Tracy Ray will be featured on Lifetime television network’s, Access Health, in a segment entitled, “Knee Pain Keeping you down? Not Any More.” From front to back: Kelly Williams, Kay Pallo, and Jessica Hudgins Carrie Killelea, PhD will join the Michael W. Krzyzewski Human Performance Laboratory as a research analyst on September 15, 2016.  Carrie grew up in Flemington, New Jersey, and got her bachelor’s of science in biomedical engineering at North Carolina State University.  She pursued her doctoral degree at Drexel University while working part time as a motion capture engineer at Shriners Children’s Hospital Philadelphia.  Her PhD research focused on foot function and structure in young adults with particular emphasis on arch structure.  After graduation, her role transitioned to the full time senior motion capture engineer at Shriners Children’s Hospital where she led research projects, facilitated lab accreditation, and drove student internships.

While working at Shriners, Carrie married her husband Charles, and they had their first child, Ashlyn, to add to their furry family of Nova, their labordoodle named after Charles’s alma mater, and Finley, a bichon-shih tzu named after Carrie’s.  Since then, they have relocated to North Carolina where they had their son Graeme and have settled into the southern living.  Carrie is looking forward to enhancing the already amazing K-Lab. Corey Simon, DPT, PhD has joined the Duke School of Medicine as an assistant professor in the Department of Orthopedic Surgery and Doctor of Physical Therapy Division.  As a pain and aging researcher, Dr. Simon is committed to maintaining physical function and quality of life among older adults suffering from chronic musculoskeletal pain conditions.  Currently, he is developing geriatric real-time physical performance measures of movement-evoked pain, which represent activity-related pain experienced in the home and community. Dr. Simon is also investigating chronic pain phenotypes among older adults with the goal of streamlining clinical assessment and treatment.  END_OF_DOCUMENT_TOKEN_TO_BE_REPLACED Maggie Horn, DPT, MPH, PhD has joined the Duke Department of Orthopedic Surgery as an Assistant Professor in the Division of Physical Therapy.  Dr. Horn’s research is focused on examining the role of health care providers, including physical therapists, and subsequent management pathways to determine the effect of different management pathways on patient centered outcomes, healthcare utilization and costs in patients with musculoskeletal neck pain with the primary objective of improving healthcare delivery.

Dr. Horn was born and raised in Oklahoma where she attended Oklahoma State University for her undergraduate degree in Psychology. She then moved to Florida to attend the University of Florida Doctor of Physical Therapy Program where she met her husband Todd. While practicing as a clinician part-time, Dr. Horn then continued on at the University of Florida to complete her Master in Public Health with a concentration in Epidemiology and PhD in Rehabilitation Sciences with a focus on examining clinical outcomes patients with musculoskeletal neck pain who undergo physical therapy. END_OF_DOCUMENT_TOKEN_TO_BE_REPLACED

We would like to recognize Dean C. Taylor, MD, who was honored as University of Washington’s Visiting Professor August 16-19, 2016. His talk, “A Surgeon’s Story of Injury in the Operating Room,” went over leadership development in healthcare and medicine, and how these skills can help when mistakes happen in the operating room to not only a patient, but to surgical personnel as well.

We invite you to view Dr. Taylor’s Grand Rounds talk above, or enjoy photos from the lecture below. 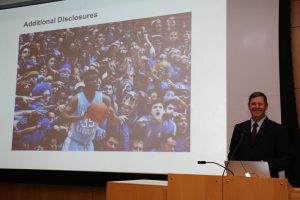 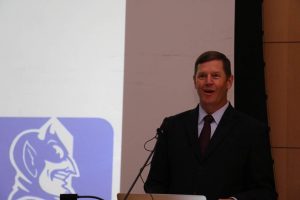 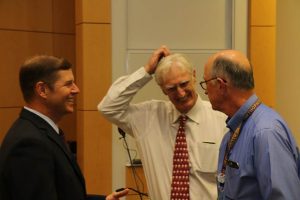 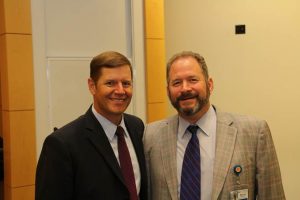 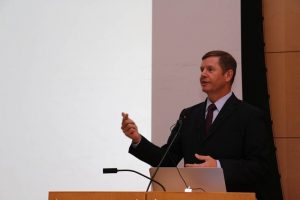 We would like to congratulate Jonathan C. Riboh, MD who was featured in Clinical Practice Today for his work with young athletes; specializing in children, adolescents, and young adults with sports-related injuries of the shoulder, knee, and elbow.

Riboh, one of the few pediatric sports medicine surgeons on the East Coast, is working to build a regional center of excellence to attract pediatric patients with a full range of sports injuries. With a background in such complex procedures as growth-sparing anterior cruciate ligament (ACL) reconstruction, meniscal repair, and allograft transplantation, Riboh is already attracting referrals. You can read more about Dr. Riboh’s work here. We would like to welcome Mallory Faherty, MS, ATC, as the newest Research Analyst in the Michael W. Krzyzewski Human Performance Lab (K-Lab) in the Department of Orthopaedic Surgery.

Mallory grew up in Cincinnati, Ohio. She attended The Ohio State University for undergrad and received a degree in athletic training. With the completion of her undergraduate degree, Mallory became a Certified Athletic Trainer, taking on the role of graduate assistant athletic trainer with the University of Pittsburgh Women’s Gymnastics team while completing her Master’s degree in sports medicine. She is currently in the process of completing her PhD in rehabilitation science at the University of Pittsburgh, where her dissertation is focused on lower extremity musculoskeletal injury prevention in college athletes.  END_OF_DOCUMENT_TOKEN_TO_BE_REPLACED