Durham, N.C– We are delighted to announce that Steve Olson has been appointed the department’s inaugural Associate Chair for Research.  In this role, Steve will oversee the implementation of departmental research policies. This role will incorporate many of his current activities such as chairing our departmental seed grant competition and overseeing CRU policies.  He will also act as our interface with the research admin staff we’ve contracted from the department of surgery.

Steve heads our hip preservation service and has a very productive research program in preventing osteoarthritis after intra-articular fractures. He lead the team that received this year’s Kappa Delta award for his research at the ORS and AAOS meetings.

Steve Olson spends most of his non-working hours as a father and husband – and he and Diane are about to join the ranks of empty nester’s this fall.  He enjoys golf though his enthusiasm for the sport is not matched by his handicap.   He enjoys preparing (and eating) Missouri style barbecued pork. Durham, N.C– Dr. Mohamad Halawi has one of the Chief Residents has been awarded a prestigious award and is headed to Switzerland in 2016-2017 for a fellowship.  Awarded the Hip Society Maurice E. Muller European Fellowship, Dr. Halawi will be in Switzerland for 6 months between 2016-2017.  Dr. Halawi will be studying open hip preservation techniques to help him further expand his knowledge.  We would like to congratulate Dr. Halawi on his achievement. IMAGE: Top slide illustrates an older bone, where fracture repair is slower and can lead to deposits of weak fibrotic tissue. Bottom slide shows rejuvenated fracture repair from exposure to a youthful circulation; the rate and amount of bone tissue deposited is enhanced.

DURHAM, N.C. – Broken bones in older people are notoriously slow to heal, but researchers at Duke Medicine have identified a potential way to speed the process.

In studies using mice, the researchers not only traced what signals go wrong when aged bones heal improperly, they also successfully manipulated the process by both circulating blood and transplanting bone marrow from a young mouse into an older mouse, prompting the bones to heal faster and better.

The findings, reported in the xx issue of the journal Nature Communications, address one of the largest problems draining health care resources. According to the Centers for Disease Control and Prevention, fractures are the most common and costly nonfatal injuries to adults over age 65. They account for more than one-third of that population’s nonfatal injuries, and 61 percent of total nonfatal care costs.

The work builds on earlier research by the Duke-led team and others, which identified an important role for a protein called beta-catenin in the rejuvenation process. The protein requires precise modulation for successful bone fracture repair. In older people, beta-catenin levels are elevated during the early phases of bone repair, leading to the production of tissue that is more like scar than bone, which is not good for bone healing.

Using mice as a surrogate for humans, the researchers found that they could manipulate beta-catenin levels by exposing older animals to the blood circulation of younger animals, essentially correcting the intricate formula necessary for healthy bone repair.

“It’s not that bone cells can’t heal as efficiently as we age, but that they actually can heal if they are given the right cues from their environment,” said senior author Benjamin A. Alman, M.D., chair of the Department of Orthopaedic Surgery at Duke University School of Medicine. “It’s a matter of identifying the right pathway to target, and that’s what’s exciting about this work.”

Alman said the findings suggest that drug therapies may be able to decrease beta-catenin levels or modulate the inflammatory process to improve fracture repair, both in older adults and perhaps in people who have received bone implants.

“The next steps are to figure out what’s making beta-catenin go up in older adults, so that we can target that cause,” Alman said, “and to explore drugs that can be used in patients to change beta-catenin levels safely and effectively.”

The study received funding from the Canadian Institutes of Health Research and from Duke. The work was done at Duke and the Hospital for Sick Children in Toronto.

Durham, N.C– Dr. Samuel Adams of Duke Orthopaedics helped to combine modern technology, extensive medical knowledge, a patients trust  and hope, to save patient Ruth’s leg.  After being involved in a devastating car accident, Ruth was faced with the difficult decision on whether or not to amputate her leg.  But her medical team at Duke, led by Dr. Adams was able to offer her an alternative.  By using 3D printing he saw at a conference, Dr. Adams worked closely for 4 months with suppliers to create a new bone structure for the patient.  With intensive physical therapy, and good spirit from the patient, Ruth was able to make a full recovery instead of having to amputate.

Without the medical team at Duke, and Dr. Adams advance knowledge of technology and medicine, Ruth would have lost her leg, and the ability to maintain a normal life.  But she now can because of Duke Orthopaedics.  The video is connected with a hyperlink in the line below so you can watch the full story.

See this link  for the video.

Asheville, N.C– The 2015 NCPTA conference has been announced to take place in Asheville, North Carolina from October 8-10.  With the inaugural keynote speaker being Dr. Chad Cook of Duke Orthopaedics, the fall is set to kick off to a great start.  Registration to attend the event will take place soon, and it will be hosted at the Crowne Plaza.  See the NCPTA Site for more details about upcoming events.  A big congratulations to Dr. Chad Cook for the honour. Durham, N.C– Division of Orthopaedic Research receives 3 new NIH grants!    The Research Division is excited to announce several new NIH grants and fellowships that were award this month.  Dr. Guilak received a research grant in collaboration with Dr. Charles Gersbach, entitled, “Scaffold-Mediated Gene Delivery for Engineering of Osteochondral Tissues”.  This makes Dr. Guilak one of very few people in the country who is Principal Investigator of 6 NIH grants, along with two other federal grants and numerous foundation grants.   This project is one of the first approaches of combining gene therapy and tissue engineering to regenerate cartilage and bone for joint repair. Dr. Feagin giving a speech on the Sunday Brunch of the event.

Durham, N.C– The weekend of May 22 played host to the 6th annual Feagin Leadership Programme.  An invitation only event, the programme hosts many notable speakers who help influence the thought process of fellows, residents, and medical students with speakers at the conference including Eugene Washington President and CEO of Duke University Health System, Alex Gorsky CEO of Johnson & Johnson, and Coach Mike Krzyzewski.  Bringing together such great minds in one place is to help push the boundaries of leadership and shape new ideas to create a better leader, another shining example of Duke Medicine being a leader in the country in innovation.  The event has several corporate and social partners related to Orthopaedics to help give the future leaders the best opportunities possible.  See a gallery of the picture here.

Durham, N.C– Duke University has announced a form of two step verification for remotely accessing online information.  The new multi-step process will help to thwart cyber criminals and other users preparing to access unauthorized data, all while making sure that patient and employee data is secure.  Starting on September 1st the new system will require another step to ensure you are who you say you are such as an email with a number on it, or a text message to a verified phone number.  See the original article here.

Cary, N.C– Duke’s Department of Orthopaedics lent a hand on May 6th and 7th to the Wake County Special Olympics.  Wake County Special Olympics helps over 1,200 athletes compete in year round sports, and several staff members from the Department of Orthopaedic Surgery went to provide medical care to any injured athletes.  Ray Malaguti, Associate Director of Clinical Operations expressed his gratitude toward staff members, and his pleasure with how well the Special Olympics went.  “It is activities like this that sets us apart, this makes the fourth year that we have participated and we will continue to participate in the future,” said Malaguti.  A wonderful opportunity show how supporting and amazing a community can be the Special Olympics is always looking for the public to come support the athletes as they compete. 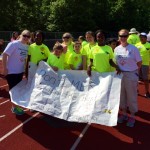 Pictured are Krista Gingrich and Jennifer Dye with the athletes. 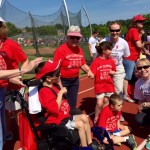 Pictured are Krista Gingrich and Jennifer Dye with parents and the athletes. Durahm, N.C– Just a friendly reminder to sign up for the 5K and Family Fun Walk to help battle Sarcoma.  See this link for more details! Or check it out on Facebook!