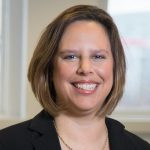 Debbie Goldstein is the Executive Director of the NC Leadership Forum. Prior to joining NCLF, Debbie was an Executive Vice President at the Center for Responsible Lending, a national research and policy organization based in Durham that focuses on protecting borrowers from abusive lending practices. In 2002, Debbie assisted local organizations and lawmakers in drafting and advocating for legislative remedies to address exorbitant fees on subprime mortgages in New Jersey and played a critical role in negotiating the New Jersey Home Ownership Security Act. She also advised the sponsors of the Massachusetts Predatory Home Loan Practices Act of 2004, and worked with lead organizations in the state of Massachusetts to support enactment of the legislation. After contributing to development of key provisions of the Dodd Frank Wall Street Reform and Consumer Protection Act and other related federal regulatory efforts, Debbie also taught Consumer Law at the UNC School of Law at Chapel Hill as an adjunct professor. She has lived in Durham since 2001 and has been an active member of the local community. Debbie has served on the boards of Durham Congregations in Action, Beth El Synagogue, Carolina Jews for Justice, and Bend the Arc. She is a graduate of Brown University and Harvard Law School, and enjoys spending time with her husband and two children when she is not at work.