Scientists know that the human brain is far different from that of a cuttlefish, but what they aren’t so sure is how cuttlefish use depth perception in the same way humans do. For this study, scientists focus on the common European cuttlefish, Sepia officinalis. They are in the subclass Coleoidea, “soft-bodied”, with octopus and squid, live one to two years, and have eight arms and two tentacles. This species of cuttlefish preys on fish and small crustaceans, including crabs, shrimp, and prawns. They forage in 4 stages: detection, positioning, strike start, and prey seizure. Cuttlefish must obtain a distance close enough to grasp the prey with its tentacles, but far enough away to not startle the prey. An example of a foraging strategy includes hypnosis, where cuttlefish use their color-changing abilities to stun their prey and eat them while they are distracted. This particular study focuses on the use of stereopsis for depth perception as they forage.

Stereopsis can be defined as “3D vision”, or how eyes perceive depth.  It is documented in many mammals such as primates (including us), birds, cats, horses, and praying mantises.  However, there have been no previous studies conducted on marine megafauna, thus this study gathered a fair amount of scientific attention.  There had been previous evidence suggesting that cuttlefish may have depth perception. First, the cuttlefish’s camouflage ability is thought to be influenced by depth perception.  Experiments on checkerboard and pebble backgrounds suggested that cuttlefish produced more effective disruptive patterns when a light object was placed in front of a dark object, and when backgrounds had edges and contrast.  Regarding cuttlefish’s hunting, prey attacks were confirmed to be initiated purely by visual cues. Other studies concluded that cuttlefish use pictorial cues and directional illumination, but it was not clear whether cuttlefish could calculate attack distance.  The design of this experiment allowed for isolation and testing of cuttlefish’s stereoscopic vision.

The study used 11 adult cuttlefish. The researchers created a fish tank that had two cameras and a monitor used to display the moving shrimp images. The cuttlefish were trained to attack the screen image of the two differently colored shrimp while wearing the 3D glasses. The “attack” was defined by the cuttlefish deploying their tentacles. The researchers offset the images of the shrimp to test the disparity. Stereopsis was tested by isolating the use of one eye through various disparity distances. 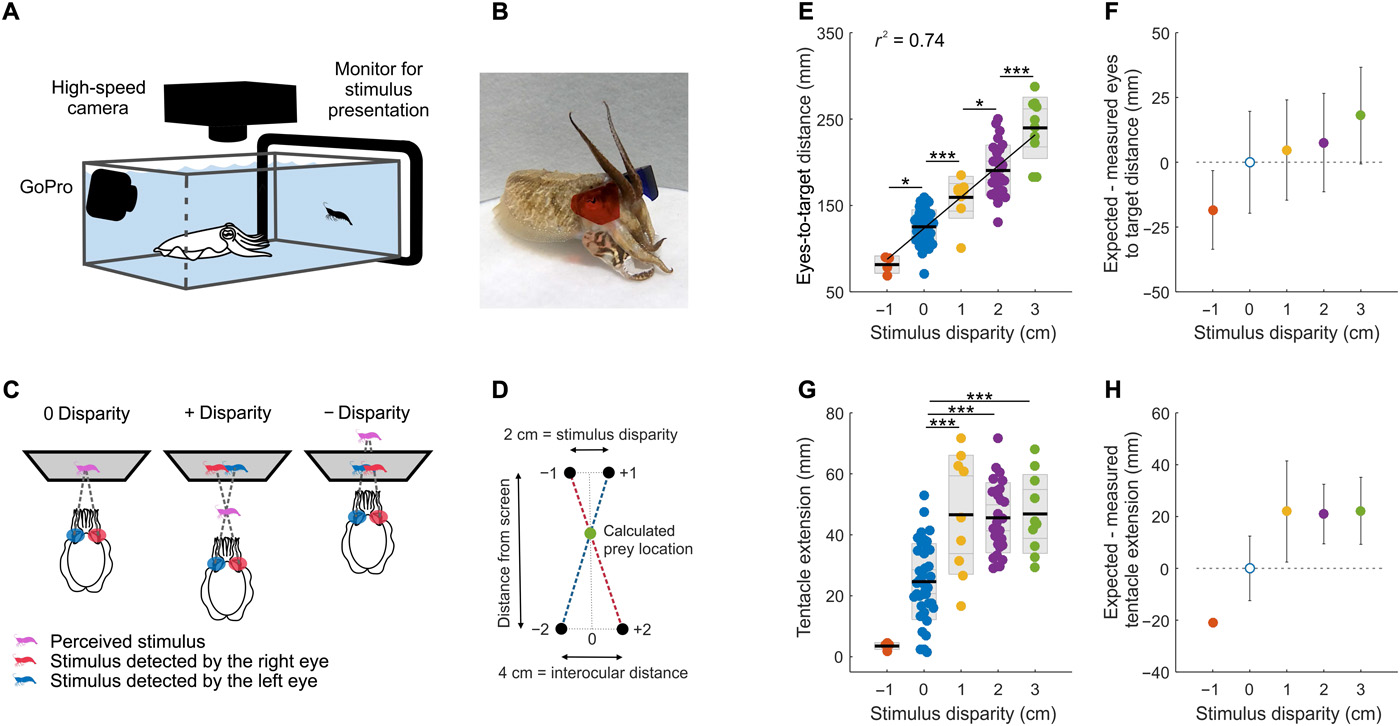 When faced with the visual stimulus of the shrimp with disparity (a shift between left and right eye visuals), the cuttlefish would adjust its position relative to the screen, and the larger the disparity, the further away the cuttlefish would position itself before striking. When faced with only one eye (quasi-monocular) stimulus, the cuttlefish took longer to strike, travelled farther, and struck at prey from a closer distance than when faced with two eye (binocular) stimulus. This shows that cuttlefish do use stereopsis when hunting, since they compare visual images from both eyes. Cuttlefish also struck at the TV shrimp when both eyes received the exact same stimulus (correlated) and when each eye received the same stimulus but with reversed luminosity (anticorrelated), but not when the stimulus was completely different for both eyes (uncorrelated), which requires different cognitive abilities than those in mammalian and praying mantis stereopsis. Finally, the study found that cuttlefish eyes can move independently and the eyes don’t need perfect convergence in position in order to use stereopsis, another marked difference with humans.

As we have seen, stereopsis was originally considered undiscovered among marine megafauna. The fact that the cuttlefish has evolved to be able to use stereopsis has significant implications for the way that it has evolved. The ability to perceive depth grants enormous benefit to the cuttlefish, particularly in relation to the way that it hunts; namely, stereopsis allows them to detect prey faster and strike from a further distance and with greater accuracy than other cephalopods. Despite increasing fishing levels, cuttlefish are not an endangered species. Thus, there exists an opportunity to conduct more tests on them in order to understand the origins of stereopsis, particular in relation to marine life. Why this diversification amongst cephalopods has taken place is not obvious but it paves the way for greater research into why certain marine species have this ability and others do not.