COVID-19 in Yemen: The Pandemic’s Impact on the World’s Worst Humanitarian Disaster

The Yemeni civil war is an extremely complex conflict, involving international and regional actors that have sought to leverage the war for their own political gain. In September 2014, Houthi forces and forces loyal to former president Ali Abdullah Salih took control of Yemen’s capital, Sana’a, and much of the country. The conflict escalated into full-blown civil war in March 2015, when a coalition of states led by Saudi Arabia and the United Arab Emirates (UAE), backed by the United States, intervened at the request of interim president Abdrabbuh Mansur Hadi. Within a period of five years, the armed conflict has created the world’s worst humanitarian crisis, with more than 24 million people (approx. 80% of the population) in need of humanitarian assistance. The conflict has devastated Yemen’s already-fragile health, water, and sanitation sector, fueling widespread outbreaks of cholera. Ongoing flooding and blockades have disrupted transportation networks, caused food prices to skyrocket, and severely limited humanitarian actors’ ability to distribute crucial supplies, triggering widespread famine and medical supply shortages. On the brink of collapse, Yemen is uniquely vulnerable to the COVID-19 pandemic, which threatens to further escalate a catastrophic humanitarian crisis.

What is the extent of COVID-19 in Yemen?

The COVID-19 pandemic has exacerbated what UN officials have called the world’s worst humanitarian crisis in a country decimated by ongoing conflict. Yemen’s first confirmed case of COVID-19 was announced on April 10th. As of September 5th, the World Health Organization reported 1,987 confirmed cases of COVID-19 with 573 deaths in Yemen – a mortality rate of 28%, one of the highest in the world. However, UNOCHA reports have suggested that this data does not accurately reflect the true extent of COVID-19 in Yemen due to a lack of testing facilities and official reporting, people delaying seeking treatment because of stigma, difficulty accessing treatment centers, and the perceived risks of seeking care. Altaf Musani, an epidemiologist who heads WHO’s office in Yemen, says that Yemen’s official tallies only reflect severely ill patients in COVID-19 isolation wards. Researchers at the Imperial College in London estimate that there have been a total of 28,187 infections during August, predicting a much higher infection rate than official reports suggest. The political situation in Yemen has already led to the world’s largest cholera outbreak in history. The threat of COVID-19 has humanitarian organizations worrying about Yemen’s already vulnerable population, especially given its collapsed healthcare system.

How well-equipped is Yemen’s healthcare system to combat COVID-19?

How are the government and humanitarian actors responding to COVID-19?

Yemen’s fragmented government has made it especially hard to deliver a coordinated response, as parts of the country are ruled by the Houthi’s government, Mansur Hadi’s government, and the Southern Transitional Council. The UAE-backed Southern Transnational Council (STC) is a southern separatist group that seeks autonomy for the south. Since 2014, Yemen has been under the internationally-recognized transitional government led by Mansur Hadi, but the opposing Houthis have control over most of Yemen’s northwest, including the capital Sana’a. Since 2015, Saudi Arabia has led a military intervention to restore Hadi’s power and defeat the Houthis. This conflict between the Saudi Arabian backed Hadi government and the Iranian backed Houthis is viewed as a proxy war between Saudi Arabia and Iran. As a result of this Civil War nearly 20,000 civilians have been killed or injured as a result of the fighting. In response, , humanitarian aid organizations have had to lead the response to the COVID-19 pandemic in Yemen. 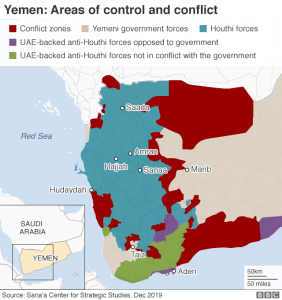 Much of Yemen’s COVID-19 response has depended upon humanitarian aid. However, there has been a funding shortfall. In 2019, the U.S. pledged 2.6 billion dollars, but in 2020, only 800 million dollars have been pledged. Only 27% of the Yemen Humanitarian Fund, which is managed by the United Nations Office for the Coordination of Humanitarian Affairs, has been funded. The Yemen Humanitarian Fund channels resources to other humanitarian actors, such as NGOs, the International Committee of the Red Cross (ICRC), and UN agencies. The UN Resident Coordinator of Yemen warned that unless funding was increased, 31 of 41 major humanitarian programs in Yemen would have to be shut down. Nearly 80% of Yemen’s population (24 million people) depend on humanitarian assistance. This can be detrimental for ensuring that displaced people and refugees have access to necessary resources.

In partnership with UN-affiliated agencies, the ICRC has responded to urgent healthcare needs since the rise of COVID-19 in Yemen. Collaborating with the Yemen Red Crescent, the ICRC has organized public awareness campaigns on COVID-19, hosted trainings on proper hygiene, and distributed cleaning and personal hygiene items to ICRC-supported hospitals, primary healthcare centers, detention facilities, quarantine facilities, and hubs for Internally Displaced Persons (IDPs). The ICRC has also disseminated information about preventative measures through social media, call centers, and audio spots. 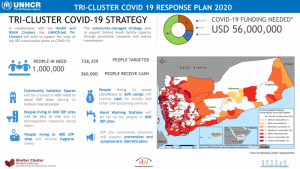 Why is water, sanitation, and hygiene (WASH) such a significant priority for humanitarian aid in Yemen?

Yemen is uniquely vulnerable to COVID-19 because of its crippled water, sanitation, and hygiene infrastructure. Unlike other water-scarce countries where water insecurity triggers conflict, water security in Yemen is a casualty of conflict. Rival factions within Yemen have orchestrated targeted efforts to destroy civilian infrastructure, particularly energy and water systems, in an attempt to weaken opposing forces. Between 2015 and 2019, there were over 100 recorded attacks on water-related infrastructure such as water utilities, water purification plants and distribution systems, wells and water tankers, pipelines, and water drilling equipment. These attacks not only violate international humanitarian law, including the 1977 Geneva Conventions (Additional Protocol 1 and 2), but they have also dramatically increased the number of people without access to clean water and sanitation. According to USAID reports, about 18 million people in Yemen have limited or no access to safe drinking water, sanitation, or hygiene services.

Collapsing WASH infrastructure has also directly contributed to massive cholera outbreaks in Yemen. Yemen’s cholera epidemic began in October 2016, spreading rapidly and reemerging in multiple waves from 2016 to 2020. From October 2016 to October 2018, there were more than 1.2 million cases reported, and more than 2,500 people—58% children— died in the Yemen cholera outbreak. From January 2018 to January 2020, cholera affected all but one of the 23 governorates in Yemen, with more than 1.2 million suspected cases since January 2018, including 1,543 deaths.

What is the Global WASH Cluster and what is its role in Yemen?

The Global WASH Cluster (GWC) is a humanitarian coordination platform that aims to strengthen “system-wide preparedness and coordination of technical capacity to respond predictably to humanitarian emergencies, and provide clear leadership and accountability in the main areas of humanitarian response.” Led by UNICEF, the GWC is composed of 77 organizations including UN agencies, international humanitarian organizations, National Civil Agencies, International Federation of the Red Cross and Red Crescent societies. At a country level, the primary functions of a cluster are as follows: supporting service delivery; informing strategic decision-making of the Humanitarian Coordinators and Humanitarian Country Team for the humanitarian response; planning and strategy development; monitoring and reporting the implementation of the cluster strategy and results; recommending corrective action where necessary; contingency planning/preparedness/capacity building; and advocacy.

Yemen is among 26 countries on the GWC’s 2020 Priority Watch List. The Yemen WASH Cluster facilitates coordination between UNICEF, the Yemen Ministry of Public Health and Population (MoPHP), and other partner organizations operating in Yemen and disseminates resources developed by UNICEF. Since the COVID-19 pandemic has spread across the globe, the Yemen WASH Cluster has prioritized coordinating WASH-specific responses to COVID-19, compiling a centralized resource hub for humanitarian actors in the region.

The HRP estimates that 20.5 million people in Yemen are in need of WASH services, and 11.2 million have acute need for WASH services. The HRP’s WASH response outlines strategies for First Line Response and Second Line Response. The First Line Response for WASH aims to “help ensure communities at high-risk of cholera, COVID-19 and WASH-related diseases have access to safe drinking water, sanitation services and hygiene items,” assessing the strategy’s impact by tracking the percentage decrease in the number of cases of water-borne diseases, including cholera. Mechanisms to achieve the First Line Response include:

The Second Line Response aims to “expand water and sanitation services for displaced families and vulnerable host communities in priority districts,” assessing the strategy’s impact by tracking the percentage increase in the number of households with access to safe water and sanitation services. Mechanisms to achieve the Second Line Response include:

The HRP projects that $199 million USD will be needed to accomplish the goals of the WASH cluster response in Yemen. Of the 79 partners in the WASH cluster, 49 partners are involved in first and second-line responses.

How has recent flooding affected Yemen?

Throughout Yemen, recent torrential rain has triggered flash floods that have resulted in a devastating toll. This year, devastating flooding struck Yemen in three waves, beginning in April and striking again in June and early August. Reports suggest that flash floods have killed at least 172 people and left 300,000 homeless in August. The floods have also caused dams to overflow, blocked and damaged transportation networks, injured livestock, and washed away food, shelter, and hygiene supplies at many IDP sites. The floods have impacted efforts to contain the spread of COVID-19, as people have been left jobless and displaced. This has affected social distancing efforts and access to water for hand-washing. The impact that these floods have had on the spread of COVID-19 have not been measured yet, but are likely to be significant. Salem Al-Khanbashi, Yemen’s deputy prime minister, said the government had allocated 2.5 million Yemeni riyals ($9.9 million) for reconstruction and relief after floods in April, but that reconstruction and relief for the most recent wave of flooding is “beyond the government’s abilities.” International agencies such as the UNHCR have aided in flood relief and reconstruction, yet lack the funding to mount a robust response and sustain current operations.

How has famine in Yemen made Yemenis vulnerable to COVID-19?

Saudi Arabia has had a sea, land, and air blockade on Yemen since 2015. This blockade has resulted in food and medical supply shortages, and one of the worst famines in modern history. Saudi air strikes since 2015 are also a factor in this famine, as one-third of these air strikes have hit civilian targets. The air strikes are yet another reason for Yemen’s health infrastructure collapsing.

As of July, two million Yemeni children need treatment for acute malnutrition, and 360,000 of these children are at risk of dying without treatment. 20 million Yemenis are food insecure and 13 million are receiving food aid, but this aid is at risk due to funding shortfalls in international aid.

However, the Houthis have also played a role in Yemen’s famine. The Houthis have blocked half of the UN’s aid deliveries, rejecting UN missions by withholding visas and permissions for equipment. The Houthis have led to the rejection of billions of dollars in aid because they want to have power in determining who gets the aid. Because of the Houthis’ attempt to pressure humanitarian agencies, many humanitarian aid agencies are reluctant to continue giving to Yemen. For example, the World Food Program had considered in February to reduce “the monthly food aid it delivers to 12 million Yemenis every other month.” Therefore, the damage that a famine combined with a worldwide pandemic is incomprehensible. Yemen has been suffering from the civil war for about 6 years, and COVID-19 could severely undermine human security in a country that was already at its breaking point.

Yemen has many challenges moving forward. The cholera outbreak, the lack of access to WASH, the recent floodings, and now the COVID-19 pandemic has increased the population’s vulnerability. It is critical that humanitarian aid organizations mobilize the necessary resources to help Yemenis gain basic access to WASH, food supplies, and PPE in order to deal with the impacts of COVID-19.