Iran in the International Spotlight: Battling COVID-19 in a Failing Economy

As one of the first countries to face a major outbreak of COVID-19 in early 2020, Iran provides a unique lens into the challenges faced by countries in the Middle East and North Africa, with a complex international political landscape. With the first official cases recorded in mid-February, Iran faced an upward battle in limiting cases amidst holidays, economic sanctions from the United States, and a crippled domestic economy.

Potentially as early as December 2019, the then-Minister of Health Hassan Ghazizadeh Hashemi and his successor Saeed Namaki alerted President Rouhani of his concerns over the virus and requested a ban on travel to and from China and mandatory quarantine for Iranians arriving from China. These concerns were ignored by the President. Two months later on February 19, Qom Province, in north-central Iran, confirmed the first two cases of COVID-19 in Iran, and the country rapidly became a global hotspot for the virus. With a government response marked by denial and complicated by sanctions, the country continues to struggle in its fight to control its case count. At the time this post was written, Iran had 2,319 new cases of 399,940 confirmed cases and 116 new deaths of 23,029 confirmed deaths; this is likely to be an underestimate. 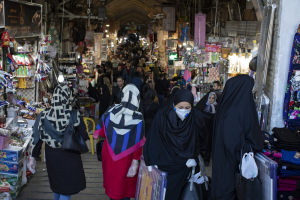 Some individuals at Tehran’s Grand Bazaar take precaution as they shop ahead of New Year’s celebrations; Kaveh Rostamkhani

Despite being one of the first countries to report a COVID-19 outbreak in the pre-pandemic period prior to March 10th, discrepancies in case and death counts have continued to complicate Iran’s treatment and intervention plan. In the initial months of the pandemic, outlined below, COVID-19 was met with plenty of skepticism and hesitancy from the government; in February, Rouhani revealed, “We have no plan to quarantine any district or any city. We only quarantine individuals. If an individual has early symptoms, that person must be quarantined.” Several whistleblowers from the Iranian health ministry, as first reported by BBC News, came forward to give testament to the government’s denial of the disease. In Qom, the first province to report cases, outbreaks went undiagnosed in hospitals as multiple patients began reporting COVID-19 symptoms but were denied tests. In an interview with BBC, one person within the health ministry commented, “Initially they did not have testing kits and when they got them, they weren’t used widely enough. The position of the security services was not to admit to the existence of coronavirus in Iran.”

Some political commentators attributed the government’s reluctance to publicly announce the presence of COVID-19 in Iran as an effort to lessen the impact on the parliamentary elections that took place February 21st, following the death of a top general. On January 3rd, the United States targeted and killed top Iranian general Qasem Soleimani in a drone strike. Public outrage arose across Iran, calling for retaliation: Iranian authorities pushed forth missile attacks on American military positions in Iraq. However, with the widespread support for the Iranian military, the February elections were held as an opportunity to strengthen the Islamic Republic’s popular support; a pandemic posed a risk to that. In an interview by Reuters with a high-ranking government official, he stated, “The last thing we needed was a pandemic. The mood was already down.” Despite the fervor that had arisen in the aftermath of Soleimani’s assassination, the election yielded very low voter turnout, just 42.57% in comparison to 61.83% in the 2016 parliamentary elections. 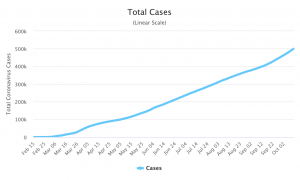 Nowruz, the New Year holiday for many ethnic groups in Iran, is typically celebrated through the months of March and early April by traveling and gatherings with one’s family and friends. This year, Nowruz took place March 20th, with associated holidays Chaharshanbe Suri on March 13th and Sizdah Bedar on April 1st. As the event drew near, the Iranian government did tighten some policies; however, many restrictions came after travellers had already set out[3][4][6]. Celebration of the holiday was largely affected by the pandemic and ultimately cancelled. Additionally, in March, Friday prayers were cancelled for the first time since the Iranian Revolution in 1979[3].

Politics amidst a pandemic:

International political and economic pressures have resulted in a rushed reopening plan and several discrepancies in COVID-19 reporting for Iran. Dealing with the economic pressures of a pandemic has been complicated by sanctions enforced by the United States, a crippled oil sector, and currency inflation. The International Monetary Fund initially projected 0% growth in Iran’s economy, but after the pandemic struck, it predicted economic shrinkage of 6% by the end of 2020. As Iran looks to rebuild its economy, its terse relationship with the United States continues to hinder its efforts: the United States blocked Iran’s request for an emergency $5 billion loan from the IMF. As the Iranian economy worsens and inflation and unemployment climb, there are dire consequences for healthcare and sanitation amidst COVID-19. The civilian population has a lower ability to afford essentials such as groceries and healthcare precautions. Despite President Rouhani’s announcement of five billion dollars going towards Iranian businesses impacted by COVID-19, the impact of this investment has yet to trickle down to the general population.

Iran began its reopening efforts on April 11th, with a statement by President Hassan Rouhani announcing a decline in new cases. However, no plateau was recorded in the data, nor did a decrease in cases occur — from April 9th to May 29th, cases rose from 55,743 to 146,668 with a mortality rate of 5.2 percent. Moreover, the reliability of the data on cases and mortality has come under international scrutiny in the aftermath of leaked government documents to BBC News. The leaked data show higher case and death counts recorded by the Iranian government, internally, in comparison to the numbers reported externally. Death counts recorded by the Iranian government total 42,000 people as of July 20th, yet the Iranian health ministry reported a mere 14,405. Several news outlets and political commentators have speculated as to what may have motivated such a discrepancy: testing capabilities are an obvious concern, but officials in Iran have alluded to a reluctance to test in the first place rather than a scarcity in tests themselves.

With the risk of COVID-19 still present, mounting economic pressure is widely speculated to be the key driver in the early timing of this reopening plan: Iran’s Economic and Finance Minister reported a 15% drop in GDP. Further complicating this economic decline is the reality that U.S. sanctions have been in place since mid-2018 following President Donald Trump’s decision to leave the nuclear deal. To ground the impact of these sanctions, Iran’s income from oil dropped from $62 billion in 2018 to a projected $9 billion this year. Long before the onset of COVID-19, the impact of these sanctions was felt across Iran through rising gas prices, scarcity in imports (including medicine), and limited job prospects. At the end of 2019, protests erupted across Iran in frustration over the rising gas prices and overall state of the economy; the government faced criticism from its citizens for its distribution of the revenue of the increased gas prices.

To this day, inflation plagues the country’s currency as well as food and other essential goods at nearly 40% — a number that is particularly perilous for a population sheltering in place amidst a pandemic. The implications of inflation on household items and foods have negatively harmed Iranian families, forcing many to turn to informal marketplaces such as flea markets for cheaper goods. The problem? These markets are harder to regulate from a public health perspective: social distancing and universal face masks are incredibly difficult to enforce in a bustling flea market.

International economic pressures have also prompted structural reorganizations in Iran’s economy, with major ecological consequences. Since 1979 and even more so these past several years, as “economic resistance” to sanctions, Iran has grown its agricultural sector with the goal of self-sufficiency. Currently, Iran uses about 90% of its renewable water sources for agriculture purposes and has grown this sector “beyond the point of sustainable water availability.” Mismanagement, rapid population growth in urban areas, and climate change has brought on water scarcity via declining groundwater tables, and reductions to lakes and rivers. Additionally, many of the water sources Iran does have are shared with neighboring countries and thus subject to foreign negotiations. Future declines in water availability could result in food scarcity and an increased reliance on imports. The country’s balance between water supply and agricultural self-sufficiency already has serious health implications for Iranians. With the additional proponent of a pandemic, availability of water and ability to practice hygiene is even more important to curb the spread of the virus.

Humanitarian Aid and Healthcare Facilities: The trickle down effects for Iranians

Because Iran produces many necessary protective equipment and materials domestically, such as respiratory masks and contamination suits, disinfectants, medications, and vitamins, the effects of the US sanctions were not felt until internal supplies had run low. Supply-chain problems in Iran have been further exacerbated by the pandemic due to the country’s reliance on imports of raw materials in order to produce these goods. Since their enactment, US sanctions have

caused restrictions to the transportation sector and import of humanitarian aid as many airlines, international shipping companies, and banks no longer conduct business with Iran. The Iranian government cited the sanctions as having especially detrimental effects on the country’s ability to obtain materials during the global supply shortage of masks and tests. The World Health Organization (WHO) sent Iran diagnostic kits, tests, and protective equipment in several packages beginning with their first reported case in February. However, these packages faced delays from transport conflicts.

In mid-March, WHO officials returning from Iran reported that at some new healthcare facilities everything was locally obtained and that these locally made equipment may have exposed healthcare workers to the virus. One healthcare worker died and twelve became infected everyday for the first 90 days of the pandemic, likely from a combination of exposures as a result of insufficient equipment, supply shortages, and the government’s dismissal of the pandemic. At the time of their report, WHO estimated that due to testing limitations only about 1/5th of actual case numbers were represented and encouraged Iran to continue expanding their testing efforts.

As we consider the macro trends in international politics that have contributed to Iran’s COVID-19 response, we must consider the micro consequences they wield onto the Iranian population — battling scarcities in medical supplies and testing capabilities, inflation on food and essential goods, and largely unexplored repercussions on water, sanitation, and hygiene (WASH). Especially with the rapid urbanization of the Iranian population to cities such as Tehran, we urge future researchers to explore the impact of price inflation in urban settings on the spread of COVID-19 (i.e. through informal economic activities like marketplaces). Moreover, focusing in on the government level, future researchers should continue to interrogate the reliability of COVID-19 data coming out of Iran. With the international economic pressures faced, questions like the affordability of raw materials to produce key medical equipment and medicines become especially pertinent to Iran’s future in a COVID-19 world.