I find myself daydreaming in the wake of reading Green Earth. I daydream of an America so shocked and inspired by climate change that a president like Phil Chase comes to office. In this brighter world, science need not stay silent on policy. On the contrary, American leaders and the American public would be informed by reliable and replicable research. I believe that for this vision to come to fruition, modern news must make major changes. 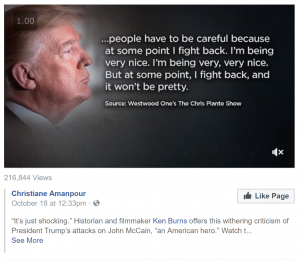 As background, I opened my Facebook feed and immediately came across this video about President Trump and Senator John McCain’s latest feuding. Directly below this video, I found another video of Joe Biden fuming about Trump. The more I scrolled, the more angry, political videos I came across. The majority of modern American news is one emotion: anger. Ceaseless waves of social and environmental injustices, borne of anger, breed further anger in the country. The negative feedback loop of Facebook-based news provides no end for this anger.

News based in facts, however, could better our world and ease the anger in this country. Kim Stanley Robinson’s decision to highlight the NSF throughout a presidential election emphasized this for me. The American public has grown increasingly partisan and stubborn over the veracity of news. “Truth” has become a matter of opinion. While I believe everyone has the right to an opinion, I do not believe that all opinions are equally valid. Our modern version of free speech has led to equal airtime for the handful of climate change deniers in scientific disciplines as the vast majority of well-educated climate change believers. I will continue daydreaming and striving to create a world where having an opinion is not as important as supporting it with facts.