I am not much of a novel reader myself. I often prefer not to read fiction books because I usually find the stories irrelevant and do not care for the pointless problems in peoples’ lives, like Kevin’s love affair with Ramona. However, “Pacific Edge” interested me in ways that most fiction does not due to its portrayal of the future. Throughout my reading of the novel, I was fascinated by the different way of life and technology that was presented. Whenever people talk about the future nowadays, they often talk about making the world even smaller. They believe that we’ll be able to travel places faster, and even get items such as food more efficiently. We’ll all be traveling 700 miles per hour in pneumatic tubes, and when we want to buy produce, Amazon drones will deliver food from Whole Foods within minutes. 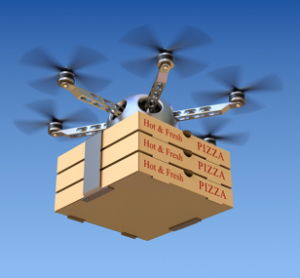 Rather than have all of these common-day ideas of future technology, that will allow us to become lazier and even less active, Kim Stanley Robinson presented a future world in which we take a step back from certain technology. The reliance on bikes in the book surprised me, but after reading an article about the prevalence of biking in the Netherlands, I realize KSR may have been onto something. The recent New York Times article “If You Build It, the Dutch Will Pedal” https://www.nytimes.com/2017/09/06/world/europe/bicycling-utrecht-dutch-love-bikes-worlds-largest-bike-parking-garages.html?mcubz=3 talks about the reliance of bicycles in the Dutch city of Utrecht.  The city just opened the world’s largest bike garage with over 6,000 spots, and the city also features numerous bike ramps alongside staircases and bike-friendly bridges in order to promote biking in the city (both seen below, both from the article). 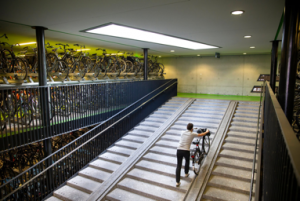 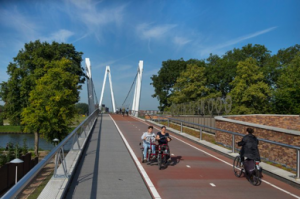 Thus, maybe KSR was on to something when he thought humans would move away from cars and be more active. After seeing the changes being made in Europe on a large scale, my initial thought that relying on biking was crazy has changed to a much stronger sense of optimism.