Fictional media definitely influences the way that we envision the future, and whether we see mostly negative or positive depictions shape our ideas on how we think future society might look.

Novels and movies are important vessels in influencing human visioning because novels engage the imagination and lead us to form images in our minds, and movies directly feed us visuals that we absorb. If you were to ask someone how the future looks to them, what would they think? Personally, I’d probably think of a scene from a movie or a visual that I’ve seen in a class reading or lecture. For instance, when asked during class what I think of when I think of the future, I immediately imagined a brown and barren earth. 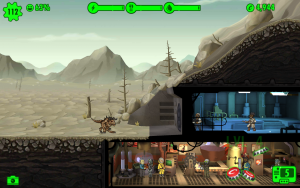 Fallout Shelter– a game that I used to play. Based on the premise that the world was destroyed by nuclear war and the survivors now live in underground shelters. https://play.google.com/store/apps/details?id=com.bethsoft.falloutshelter

A few seconds later my mind switched to a scene of a hyper technological society.

Neither are images that I conjured myself, but instead have internalized from various media sources.

Scientists were polled on their favorite sci-fi movies and, non-surprisingly, most of the movies had plots in which humans were threatened– either by robots, disease, extraterrestrials, etc.

When our minds are constantly infiltrated with negative messages it can be difficult to think positively, especially about something like the future, which holds great uncertainty.